The Jews of San Nicandro

The unique story of the Jews of San Nicandro, Italy, dates back to the end of the First World War, when a badly wounded soldier named Donato Manduzio returned home from the front.

An illiterate peasant, Manduzio found himself confined to his bed, so he decided to learn how to read. Advancing quickly in his studies, he devoured novels and other works of literature, before turning his attention to the Bible. It was there that he discovered Judaism, although at the time he thought that no Jews were left in the world. He began practicing the Jewish faith, and more and more of his neighbors joined him in his spiritual quest. Eventually, the community numbered 80 people.

Towards the end of the Second World War, after Allied forces had invaded Italy, members of the Jewish Brigade passed through the village, with Stars of David emblazoned on their jeeps. For Donato and his followers, it was their first encounter with real, live Jews. They approached the soldiers, warmly embraced them, and pleaded with them to take the community members to the Promised Land.

Subsequently, in 1946, most of Donato’s community succeeded in converting to Judaism, and the vast majority of them made aliyah in 1949. Shavei Israel also maintains contact with the community, and has sent them various Jewish religious objects and educational materials.

Shavei Israel made several visits to the San Nicandro community to get to know them personally, make a first acquaintance with them and get to know their history and needs. That was how contact was made and activities began in order to give them practical assistance in their return to Judaism.

Shavei Israel sent each member of the San Nicandro community an embroidered Hallah cloth and a Kiddush cup. The purpose of these presents was to give encouragement in their process of coming to Judaism and supporting them in all their needs. 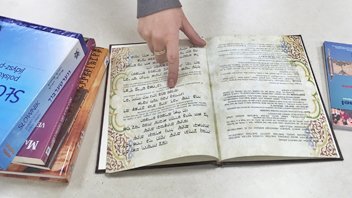