Translation of excerpts of a moving interview with Pnina Tamano Shata, Israel’s Minister of Aliya and Absorption, and Yaron Vilensky on the Chamesh baErev program, Gala”TZ, as she shares in the grief of the family of the late Yoel Lhanghel z”l of the Bnei Menashe who was murdered in cold blood in Kiryat Shmona a few weeks ago. Show aired on October 24, 2022. 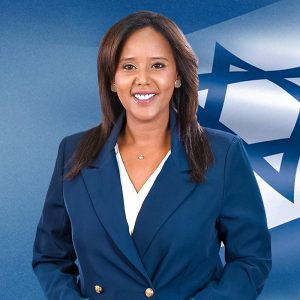 “I would like to express my condolences to Gideon and Batsheva Lhanghal, Yoel’s parents from the Bnei Menashe community, who immigrated to Israel about ten months ago, and we received them here. Unfortunately Yoel was brutally murdered during the holidays by young people and teenagers, and this is a very, very difficult case and the family feels hard feelings…

“I met them for the first time when they arrived in Israel, but it was a special operation with hundreds of people; I went to comfort them last week, and the feelings were very difficult; their whole dream, their whole being was to immigrate to Israel, including Yoel, who wanted to be a combat soldier and came with shining eyes.

“They told me about this boy who helped the family of seven children, as he was the eldest, and the mother and father are heartbroken.

“Above all, they asked me to convey the message to the people of Israel: We need to be more united, more tolerant of others, for those who don’t speak the language, and certainly for the dear Bnei Menashe community, which is a very humble community. There were racist chants and there are very hard feelings, and I think it’s a task for all of us to embrace them and help them because it’s a huge heartbreak. But you still see that this is a happy community, this is a community that is happy that it was able to fulfill the Zionist dream. You know what? To some extent it reminds me of my community, the Ethiopians, and this feeling that there is a community that has not yet integrated enough but suffers discrimination, this is something we cannot afford. And so, with God’s help, on Wednesday I will bring in the Aliyah and Absorption Cabinet, we will also raise the issue of the absorption of the Bnei Menashe and the murder of Yoel.

“I know that yesterday the commander of the Northern District dismissed the commander of the police station. There were terrible omissions, one of the omissions is that Yoel arrived at the police van injured, while still alive, and showed them the injuries and bruises as a result of the fact that he was severely and vigorously beaten, and the van drove off. This is something that no parent in the State of Israel, I as a mother of a teenage daughter, this is something that we cannot tolerate. And so beyond the fact that young people, from the age of 13 to 18, beat like animals a young man who doesn’t even know Hebrew, I really sometimes try to think to myself as someone who herself immigrated to Israel, what a difficulty it is that you can’t even convey the pain or what he was thinking in those moments.

“I can only hug his girlfriend Hadassah, who witnessed the events, and another friend of his, who is a soldier, and is now in the service, and, of course, we will do everything we can to embrace them and the family.”