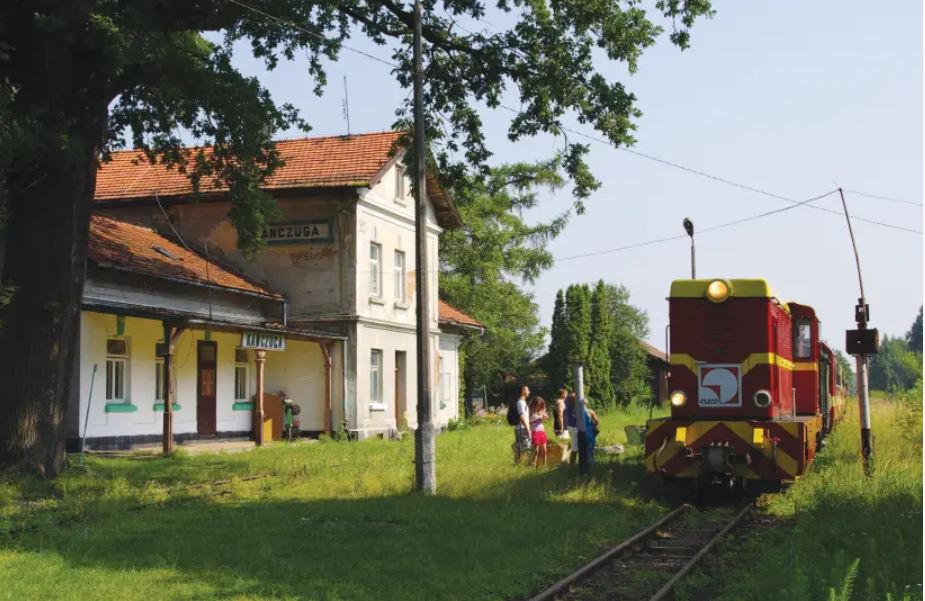 Posted at h in Features, Fundamentally Freund by
0 Likes
Share

You’ve probably never heard of a town called Kanczuga in southeastern Poland. It is a tiny point on the map, just another one of countless thousands of villages in Eastern Europe where, over the centuries, Jews lived, worked and dreamt of redemption.

They toiled to scratch out a living in conditions of poverty that would seem unimaginable to our generation, endured antisemitism and hatred far beyond our understanding, and yet managed to maintain a vibrant Jewish life. Among them were members of my family.

But 80 years ago this month, all that was cruelly shattered.

After the Nazis and Polish police rounded up hundreds of Kanczuga’s Jews, they herded them into the main synagogue. From there, the Jews were marched to the outskirts of the city, where the Jewish cemetery of Siedleczka stood.

The Germans gleefully lined them up and shot them, before unceremoniously tossing their bodies into a mass grave. Local Poles celebrated by holding a picnic and cheering on the murderers as they opened fire.

Amid the vast carnage which the Germans and their accomplices wreaked across the European continent, whether at death camps such as Auschwitz-Birkenau or sites such as Babi Yar, it is all too easy to forget the innumerable shtetls which were wiped off the map and are no more.

Easy, but unacceptable. Indeed, as we all know, the number of Holocaust survivors is declining each year. Back in April, on the eve of Holocaust Remembrance Day, the government published data indicating that there are 161,400 Holocaust survivors living in Israel, with an average age of 85. Last year alone, some 15,553 survivors, or more than 42 each day, died in the Jewish state.

And along with them went precious bits of history, tales and memories of travail and faith, which belong to us all.

If you or your family was affected by the Holocaust, seek out your relatives and collect their stories, not only about how Jews died but also about how they lived. We cannot allow centuries of vibrant Jewish life in the shtetls to be erased from our collective cache.

It is precisely for that reason that my friend Jonathan Feldstein and I are organizing an online memorial for Kanczuga’s Jews next week, on Monday, September 5, at 9 p.m. Israel time, to recall the victims and pay tribute to the survivors. Dozens of people from three continents with family links to Kanczuga have already signed up, and it is our hope that this will in some small way inspire people to do more to preserve our people’s past.

Before the Holocaust, Kanczuga was home to 3,000 people, of whom at least 40% were Jews. Until today, Kanczuga’s official seal still includes a Star of David at its heart, a silent yet symbolic reminder of the role Jews played for centuries in the life of the village.

Nearly 15 years ago, I visited Kanczuga to attend a ceremony marking the completion of the restoration of the local Jewish cemetery. Afterward, I wandered through the grounds, glancing at the remaining tombstones in somber silence, reading the names of those who had died prior to the onset of the Nazi inferno.

And then, in a moment I will never forget, I came across a tombstone with a familiar name: Freund.

Stunned, I called my father in the United States despite the early hour and said to him, “You’re not going to believe this, but I’m standing here on the grounds of the cemetery near Kanczuga, and I found a tombstone with the name Gittel Freund on it.” She seems to have been my great-great-grandmother, one of many family members who had remained in Poland.

Had I not become involved in learning more about Kanczuga, I might never have learned of her name or burial place.

Similarly, a few years ago, I visited with a remarkable man named Yehuda Ehrlich, who is in his 90s and is the last known surviving Jew from Kanczuga living in Israel. After exchanging some warm greetings, I told him about my family connection with Kanczuga and asked him if he had known anyone named Freund who lived in the town prior to the Holocaust.

“We don’t know their first names or what became of them, and I was hoping you might remember something about them,” I said, eager to learn a new piece of information and reclaim a shred of the past from obscurity.

Incredibly, Ehrlich said he did remember a Freund family. “I was just 14 when the war broke out in 1939, so I only remember the father. His name was Aharon, though he was known by his Yiddish nickname, Atche, and he was in his late 50s,” he told me.

Aharon Freund, Ehrlich related, was among the leaders of the Jewish community, and around Purim in 1942, the Gestapo chief in the nearby town of Jaroslaw summoned him and the other leaders to appear before him.

The Nazi demanded that Kanczuga’s Jews produce an inordinate amount of goods, including an impossibly large quantity of men’s suits, by a certain date or else they would face severe consequences.

“All the other Jewish leaders were silent,” Ehrlich told me. “They were of course justifiably afraid to say anything.”

But not Aharon Freund.

“He was the only one who had the courage to speak up, to tell the head of the Gestapo that the request was unreasonable and they would not comply,” Ehrlich said.

“What happened then?” I asked, though I suspected I knew the answer already.

“I heard that the Gestapo officer was incensed. He rose from his chair, took Atche and marched him downstairs to the basement, where he shot him dead on the spot,” Ehrlich told me, adding, “I don’t know what happened to the rest of his family, the Freund family.”

As painful as it was to hear this story, I was nonetheless grateful to God that some part of my forefathers’ past had been retrieved from oblivion. And I was proud to learn that dear Aharon Freund had so bravely taken a stand for his fellow Jews before being murdered al kiddush Hashem, in sanctification of God’s name.

We cannot bring the shtetls and their millions of Jews back to life, but we can still salvage something of their history, which is something we owe not only to them but also to our children and grandchildren.

For that is the power of the past: to inform the present and inspire the future. Hence, let us act now to collect these memories, before it is too late.