Bread of Seven Heavens: A Sephardic Tradition for Shavuot 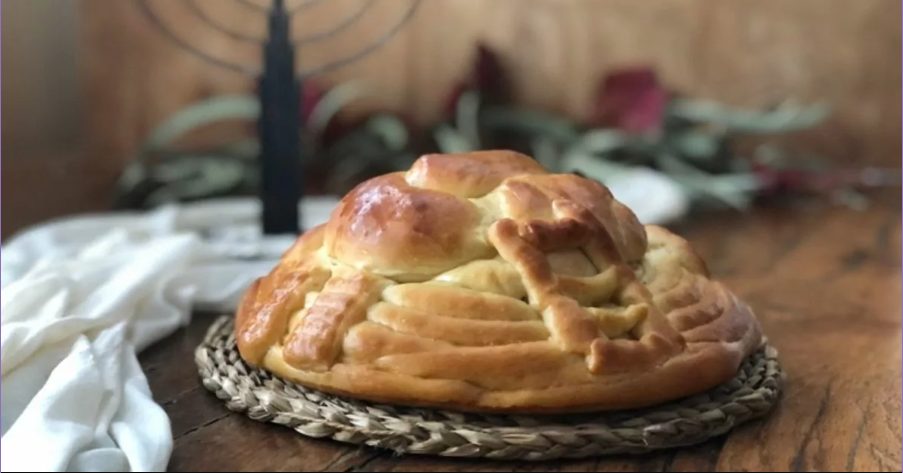 Bread of Seven Heavens: A Sephardic Tradition for Shavuot

When the Jews left Iberia after the enactment of the Alhambra Decree, they took their language, traditions and culture with them. The Seven Heavens Bread was a special type of symbolic challah baked for Tikkun Leil Shavuot, the all-night Shavuot study session.

This tradition almost died out during the Holocaust, when 96% of Salonica’s Sephardic Jewish population was killed. This year, preserve this tradition and the memory of that community by baking your own Siete Cielos Bread.

The first Sephardim arrived in Salonica, a city in the Ottoman Empire, in 1492 from Mallorca. They were “repentant” returnees to Judaism after a forced conversion to Catholicism. In the following years they were joined by Jews from Castile, Sicily, Aragon, Naples, Venice, Provence and Portugal. By 1613, Jews made up 68% of the population.

Thessaloniki is the only known example of a city of this size in the Jewish Diaspora that maintained a Jewish majority for centuries. This community influenced the Sephardic world both culturally and economically, and the city was nicknamed The Mother of Israel.

One of the traditions they brought from Iberia was a dairy challah baked especially for Shavuot. The Pan de Siete Cielos probably got its name from an old Spanish expression meaning: “I am so happy that I feel like I am floating on seven clouds”. This festive bread was first baked in the early 8th century, a period known as “the coexistence”.

Coexistence was a golden age for Spanish Jews, a time when Jews, Christians, and Muslims lived together in peace, making the Iberian Peninsula a hub for innovation and cultural exchange.

Sephardic Jews were probably inspired by the Monas de Pascua of their Christian neighbors. They started baking the bread of the seven heavens for Shavuot, one of the few holidays where it is customary to eat dairy foods.

Some historians speculate that Monas de Pascua and Pan de Siete Cielos were reinvented in the New World as Pan de Muerto. When the conquistadors (many of them converts) arrived, they found a culture of human sacrifice. They were so horrified that they replaced this tradition with the baking of a type of challah: sweet, round, with carved symbols.

To bake the Pan de Siete Cielos, a rich and milky challah dough is prepared. Symbols of the giving of the torah on Mount Sinai are carved into the challah. First, a round challah is formed to represent Mount Sinai. Seven pieces of dough are rolled out and pressed against the round challah, forming a ring around it. They represent the seven heavens or clouds. Symbols from the Shavuot story are then carved and pressed against the clouds.

Each family has its own traditions, but some common symbols are the Torah, Jacob’s ladder, Miriam’s well, the Star of David, the Hamsa, and the tablets of the Ten Commandments. After the challah is baked, honey is spread over it and sprinkled with sesame seeds. They should serve this bread when they read the Ten Commandments. As one grandmother explained, “Torah is as sweet as manna to those who feed on it.”

Adapted from the Cookbook of the Jews of Greece by Nicholas Starvroulakis
Ingredients:
• 8 cups of flour• 1⁄2 cup of milk• 2 cups of warm water• 5 eggs• 2 teaspoons of active dry yeast• 2 cups of sugar• 3/8 cup of melted butter• 1 teaspoon of anise extract or Arak• Honey and toasted sesame seeds
Instructions:
1. Pour the warm water into a large container.
2. Add the sugar and yeast.
3. Mix well and wait until the mixture foams, about 10 minutes.
4. In a separate bowl, place 3 cups of flour.
5. Make a hole in the center of the flour.
6. Pour the yeast mixture into this hole.
7. Start mixing the flour until you have a light dough.
8. Cover the bowl with a clean kitchen towel and let the dough rest for about 45 minutes.
9. Uncover bowl and add eggs, milk, butter, and anise or Arak extract.
10. Knead more flour into the dough until it feels elastic. It can be less than 8 cups to achieve the desired texture.
11. Cover the bowl with a clean kitchen towel and let the dough rise until doubled in size, about 2 hours.
12. When the dough has risen, you can sculpt your Seven Heavens Bread.
13. First, cut off a piece of dough and roll it into a ball. This will be Mount Sinai and it will be baked in the center. Place it on a large baking sheet lined with parchment paper.
14. Cut 7 pieces of dough and roll them out with your hands to form ropes.
15. Wrap them around the ball of dough. These are your 7 clouds.
16. Then carve the Shavuot symbols of your choice and press them into the clouds. Make the symbols that have meaning for you.
17. Cover the bread with a clean, damp kitchen towel.
18. Let the dough double in size.
19. Remove the towel and brush your bread with beaten egg (beaten yolks with a little water).
20. Preheat oven to 350 degrees Fahrenheit (175 degrees Celsius).
21. Place the bread in the oven.
22. Bake for about 30 minutes, or until bread is golden brown and bottom of bread sounds hollow when tapped. 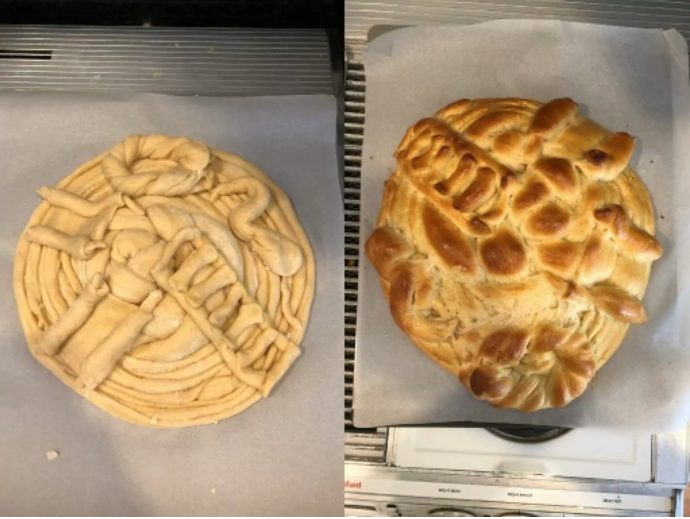