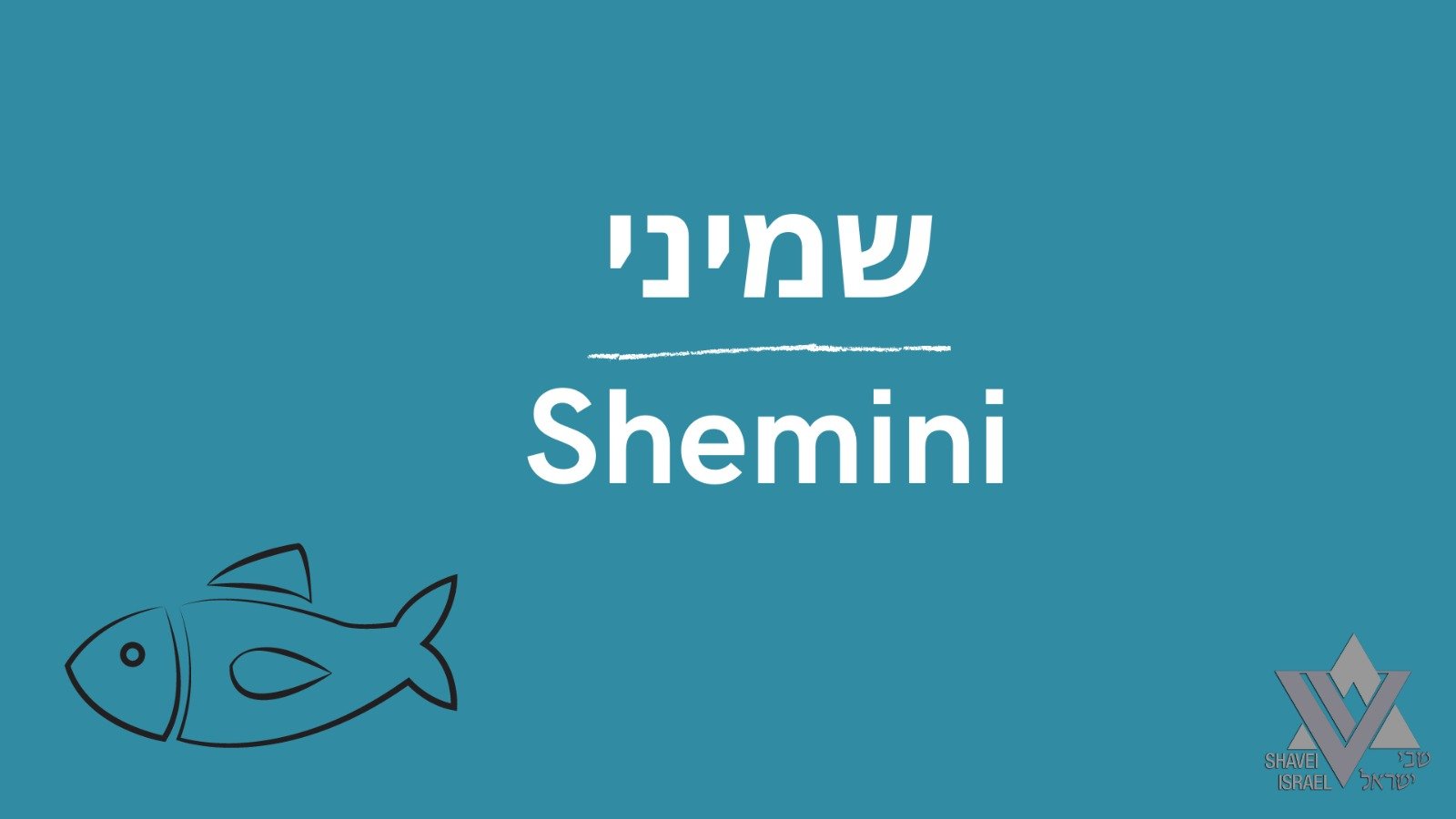 1st Aliya (Vayikra 9:1-16) On the eighth day of the inauguration of Aharon and the Cohanim, Moshe gathers the people.  He instructs Aharon to offer a chatat and an olah.  The people are also to bring a chatat, olah, shlamim and mincha.  For today, G-d will appear.  Aharon offers his offerings.  He offers the peoples offerings.  The offerings are brought exactly as instructed.

Moshe tells them that the offerings they are to bring today will invite G-d’s presence. At the end of Sefer Shemot, when the building of the Mishkan was completed, G-d’s presence filled the building. But His Presence is only half the story.  The Mishkan is not a place for He Alone.  It is a place of rendezvous: He.  And us.  He appeared upon completion of the building.  As if to take the first step.  Like a dance couple.  Someone is the lead.  He is the lead.  As He has been in the entire Torah til this point.  He has been the lead: Creation, Avraham, Egypt, Sinai, Mishkan.  It is all G-d’s reach for man.

Until here.  Moshe tells Aharon and the people: now, it is our turn to meet Him.  Aharon has been inaugurated as the one to represent the entire Jewish people in our approach to G-d.  He and the Cohanim will act as our representatives in bringing the offerings that express our desire to approach Him.

2nd Aliya (9:17-23) Aharon offers the mincha and the shlamim.  All the details are performed as commanded.  The portion Aharon is to receive is waved as commanded.  Upon conclusion of all the offerings, Aharon blesses the people and descends from the offerings.  Moshe and Aharon enter the Tent of Meeting, blessing the people upon exiting.  The Glory of G-d appears to the people.

All the types of offerings have been brought by Aharon: chatat, olah, mincha, shlamim.  The moment of rendezvous of the Divine, of responding to the approach of man is about to occur.  Aharon blesses the people with Birkat Cohanim.  Well, we call Birkat Cohanim a blessing, but it is really a prayer, a hope: May G-d bless you and keep you.  May He shine his face upon you ….

Aharon blesses the people with the hope that their aspiration for G-d’s rendezvous be realized.  Man can approach G-d, do all that is required; but His response is never dictated by us.  All we can do is our part.  And then wait for His response.

Moshe and Aharon bless the people: May the pleasure of G-d be upon you.  May the Shechina dwell on your efforts. The Kavod Hashem, the Glory of G-d appeared to the people.  Their approach and their prayers were granted with a rendezvous with the Divine.  Truly a peak, sublime moment of the entire Torah.  Man’s approach to G-d is answered with His Presence.

3rd Aliya (9:24-10:11) A fire descended from G-d and consumed the offerings on the altar.  The people saw, sang out and fell on their faces.  Nadav and Avihu, sons of Aharon, took incense, though not commanded, and burnt it before G-d.  A fire consumed them and they died.  Moshe told Aharon that this is what G-d said:  With those close to Me I am sanctified.  Aharon was silent.  After removing the bodies, Moshe told the other sons of Aharon to not mourn or leave the Mikdash; the Jewish people will mourn.  Moshe commanded the Cohanim to not consume wine when serving in the Mikdash, so that they can distinguish holy and profane and to teach the people.

The people are ecstatic with the Presence of G-d.  But the ecstasy is shattered by the death of Nadav and Avihu in bringing incense not commanded.  There is much rich commentary on the terrible drama of this story.  Ecstasy and death.  The simple flow of the narrative seems to rest on how man is to approach G-d.  The Mishkan is the place of intimate approach to G-d, the meeting of man and G-d in His home.  But the approach of finite man to infinite G-d is fraught with mystery.  And hubris.  How can finite man dare to think he can approach the Infinite?  It is absurd to even imagine that we could possibly know what would bring Divine favour.  We can do so only because – well, because He told us how.  G-d invited us, instructed us how to approach Him.  And we do so only with great humility, acknowledging that we are approaching Him only by His invitation.

It is in this context, after a long, extended narrative of detailed instructions and detailed compliance that the spontaneous desire of Nadav and Avihu to approach G-d with their unauthorized incense must be seen.  After all that, you just decide to jump, in a spirit of ecstasy, to approach G-d?  Incredible.  Shocking.

4th Aliya (10:12-15) Moshe instructs Aharon and his remaining sons, Elazar and Itamar, to consume the parts of the offerings that were brought today that they were entitled to.  They need to consume the mincha matza and the meat of the breast in the holy grounds.

Moshe proceeds with the momentous day of the appearance of G-d’s glory, proceeding with the details of the offerings.

5th Aliya (10:16-20) Moshe inquired about the meat of the chatat but it had been burned, not consumed.  He was upset: why did you not consume these in the holy place as commanded?  Aharon responded: On a day that this occurred, should we offer the offerings and eat them?  Is that proper in G-d’s eyes?  Moshe heard and agreed.

Moshe is upset that the offerings had not been consumed by Aharon and his other sons.  Aharon, struck speechless by the death of his 2 sons, now challenges Moshe.  Does our role as Divine servants eliminate our human feelings of tragedy?  Is a holy person angelic – or holy while remaining a person?  Am I not entitled to mourn at least today?

This brief, very brief, confrontation expresses a universal theme of the holy man.  Do we accept our humanity, our emotions, our desires, our complexity even in our holiest religious leaders?  Or do we expect of them superhuman, angelic behavior?  Religions of the world come down differently on this question.  Aharon sets the Jewish view, agreed to by Moshe.  The holiest person we have, the Cohen Gadol, cries like anyone else on the death of his children.  However holy he is, he is also a person with legitimate feelings.  Holy men are holy, but men they remain.

6th Aliya (11:1-32) Of land animals, you may eat those with split hooves and that chew their cud.  Those with only one such sign shall not be eaten:  camel, hyrax, hare and pig.  Aquatic beings that have fins and scales may be eaten.  Predator birds may not be eaten.  Insects may not be eaten with the exception of certain grasshoppers.  Touching the carcass of certain dead animals renders a person Tameh, impure.

The laws of kashrut begin a series of laws related to man’s uniqueness: animal-like but with a soul.  The Torah specifically legislates those activities that we share with animals: food, procreation, illness, death.  And those activities that distinguish us from animals: social behavior, communication, self-control.  In instructing us what we may eat and what we may not, we are taking the activity that we share with animals, eating, and exercising control.  We are not animals, driven without limit by the need for food.  We control what we eat, how we prepare it.

7th Aliya (11:33-47) The contraction of Tumah from contact with animals requires immersion in a mikveh.  You shall be holy because I, G-d, am holy.  I brought you out of Egypt to be My people and to be holy, as I am.  You are to distinguish between pure and impure and between living things that may be eaten and those that may not.

We are instructed to imitate G-d’s holiness.  In what way are we to imitate Him?  In Creation he separated, mavdil; so too we exercise discernment.  We distinguish between that which we consume; and that which we don’t.  Discernment, self control, structure, in particular in those activities we share with animals are what make us holy, imitating His holiness.