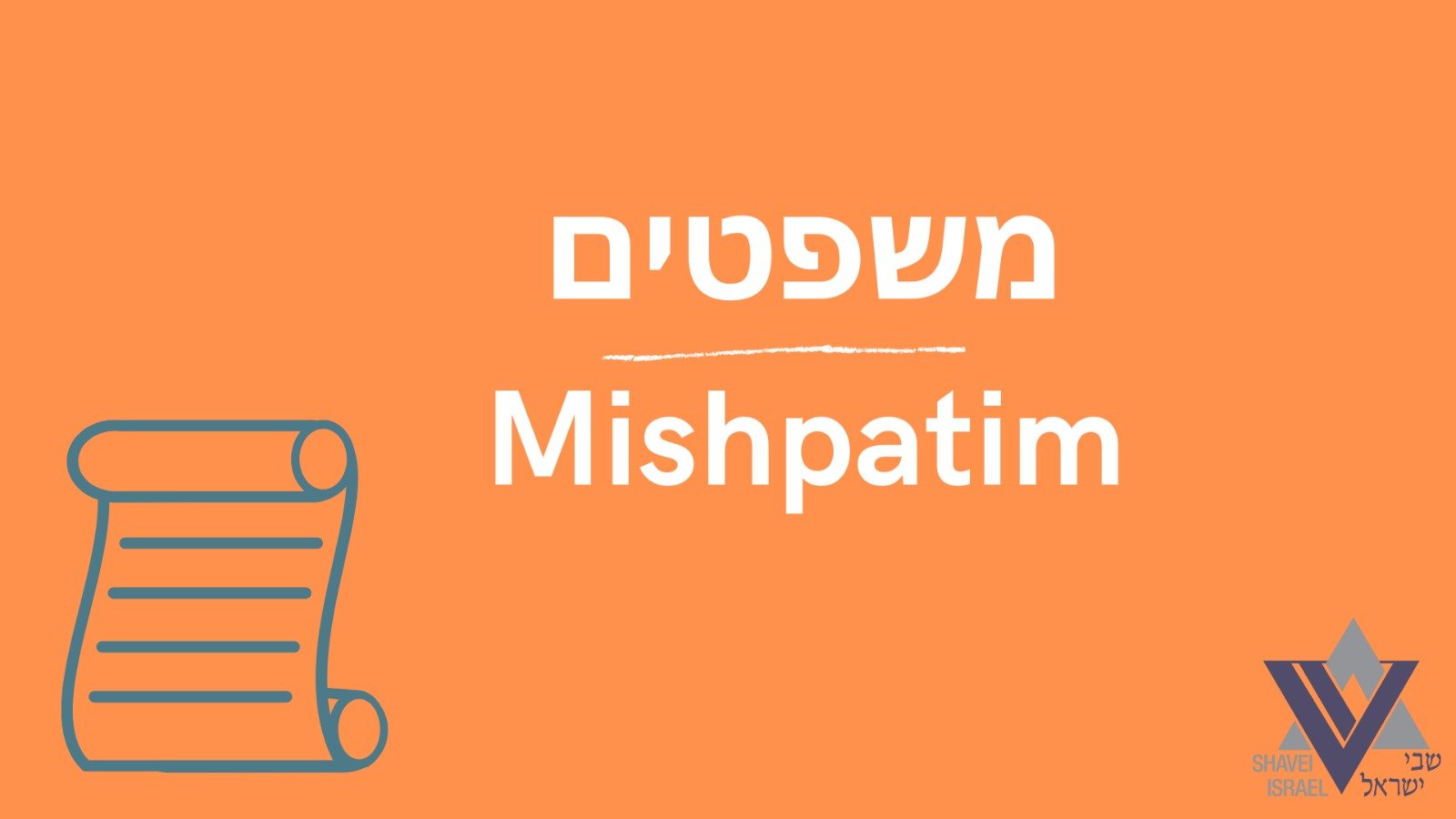 We begin a new era in the Torah: the Mitzvah era.  In the first 86 verses of the Parsha, there are 51 mitzvot. The bulk of the parsha is civil law mitzvot.  The end of the parsha resumes the narrative, describing the impending entry into the land of Israel.  Moshe ascends the mountain to receive the tablets.

To give some structure to these 51 mitzvot, I have introduced each section with a heading in bold, indicating the topic of the laws that follow.

1st aliya (21:1-19) And these are the laws you are to instruct them in.  The laws of slaves: a Jewish slave goes free after working 6 years.  If he chooses, he may extend his slavery permanently.  The owner or his son may marry a female slave.  If they choose not to, she goes free upon puberty.  Physical assault resulting in death is punishable by death; as is assaulting a parent, kidnapping, cursing a parent.  For bodily assault not resulting in death, payment is made for damage, unemployment and medical costs.

Last week’s Parsha ended with the pinnacle experience of the revelation at Sinai – and the people’s fear in hearing G-d’s voice.  What a contrast, to follow that immediately with laws about slavery.  And assault.  Rashi points out that the first word of the parsha has a “vav”, “and these are the laws”.  Even though to us this is a new parsha, in the Torah it is the continuation of the narrative of Mt. Sinai.  We have to ask the obvious question; in what way are all these civil laws connected to the narrative?

The length sojourn in Egypt had numerous purposes: 1) to allow all the Jewish people to experience G-d’s Hand in history, 2) to allow the entire Jewish people to experience revelation at Sinai and 3) to teach the Jewish people what kind of a society they don’t want to emulate.  We are journeying to a new life, a Jewish society in the land of Israel.  We aren’t just leaving Egypt; we have a destination.  But, that society we are going to build – don’t make it like the one in Egypt.  Leave Egyptian society behind.  Our Jewish society is to be nothing like that society: we are building an anti Egypt society.  Leave behind its abuse of slaves, its flippant disregard for human life (babies in the river), its excessive use of physical force (the slave master).

Our Jewish society will respect life, respect others, delineate regard for the property of others and build a society of goodness and justice.  So in that regard, it makes perfect sense to begin the description of the Jewish society in the very things that Egyptian society failed at:  slavery, physical assault, property infringement.

2nd aliya (21:20-22:3) Physical assault resulting in financial payment: assault of slaves, of a pregnant woman resulting in a lost pregnancy.  Assault of a slave resulting in loss of an eye or tooth grants the slave his freedom.  Damage caused by my property or actions:  a goring ox resulting in death of a person, death of an animal as a result of a pit dug by me, or as a result of my ox goring another.  Theft and sale or slaughter of animals requires restitution of 4 or 5 times the value of the loss.  In clandestine theft, if the thief is killed, the perpetrator is deemed to have acted in self-defense.  The punishment for theft is double the stolen object.

Besides regard for the dignity of others, our society is to be fair.  The topic of this aliya is not oxen goring oxen; it is people taking responsibility for their property.  If my property damages yours, I take full responsibility.  People respecting the property of others.

3rd aliya (22:4-25) Good neighbors: damage in your property must be compensated if done by either my grazing animals, or by a fire lit by me in my property; laws of compensation for loss of your property while being guarded or borrowed by me.  Laws when taking advantage of another: seducing an unwed woman, sorcerers put to death.  If one oppresses the stranger, widow or orphan and they call to Me, your wives will be widows, children orphans.

Returning to the theme of rejecting the norms of Egypt the superpower; power does not grant privilege.  There are people with power.  And people without.  The foreigner, the widow and the orphan have no power – they are alone, with no one to champion their cause.  Do not prey on their lack of power.  I, says G-d, am the Champion of those who have no power.  They may have no person to turn to.  But, they always have Me.  You, with power, who take advantage of those without; you will have Me to reckon with.

4th aliya (22:26–23:5) Good citizens: do not curse judges or rulers, do not delay obligations, nor ally with tricksters to pervert justice, nor follow a bad crowd in disputes.  Helpful neighbors: return a stray animal, help unburden a buckled animal even of your enemy.

The power imbalance of Egypt that bred resentment of those in power is not for us.  We are them – respect those in power, for they serve us.  Our society is to be cooperative for the good of us all.  And bettering the lives of others is not the sole responsibility of government: we all can make the lives of others better – initiate the return of lost items, unburdening the burdens of others.

5th aliya (23:6-19) Justice: do not pervert justice – of the poor and weak, through lies, through bribes and of the foreigner, for you were foreigners in Egypt.  Man’s limits in G-d’s world: work the land 6 years, leave it for the poor in the 7th.  Work 6 days, allow rest to your workers on the 7th.  Observe the 3 pilgrimage festivals: Pesach, Shavuot, Sukkot.  Do not appear empty handed.

This detailed listing of what we would call civil law concludes with Shmita, Shabbat and the holidays.  The root of a Jewish society is the healthy realization of the limits of man and our partnership with G-d.  We work; but the land is His.  We employ workers; but we are all servants to Him.  Our agriculture is punctuated by holidays; so as to temper our pursuit of wealth for wealth’s sake with an infusion of standing before Him.

6th aliya (23:20-25) Journey to the Land: I am sending My angel to guide you to the land of Israel.  Loyalty to what I say will ensure your successful settling of the land.  Don’t worship idols there; rather serve G-d and you will enjoy blessing and health in the land.

7th aliya (23:26-24:18) Your opponents in the land will cower.  I will cause them to leave slowly over time so the land not be desolate when you arrive.  Do not make a pact with the people in the land; they may not dwell with you lest you end up serving their gods.  Moshe ascended the mountain, wrote the words of G-d.  He built an altar at the foot of the mountain; offerings were brought.  He read the words of the covenant; the people responded that they will fulfill it all.  Blood was sprinkled as a covenant.  Moshe ascended with Aharon, Nadav and Avihu and the 70 elders; they perceived sapphire, the purity of the heavens.  G-d called Moshe up the mountain to give him the luchot, the Torah and the Mitzvot.  The cloud of G-d was on the mountain, the vision of G-d like a consuming fire.  Moshe was there 40 days and 40 nights.

The last aliya of a parsha gets scant attention.  But this last paragraph?  Sapphire, vision of purity of the heaven, a cloud and fire on the mountain.  While we often focus on the content of the 10 commandments at Sinai, much more attention is given in the Torah to the drama of the experience; both in Yitro last week and in this description.  The experience of Sinai is frightening.  The people felt unsure, frightened, unworthy, overwhelmed, confused.  They want a close and benevolent G-d, but they may very well be having second thoughts on seeing the power and implications of what a close G-d means.