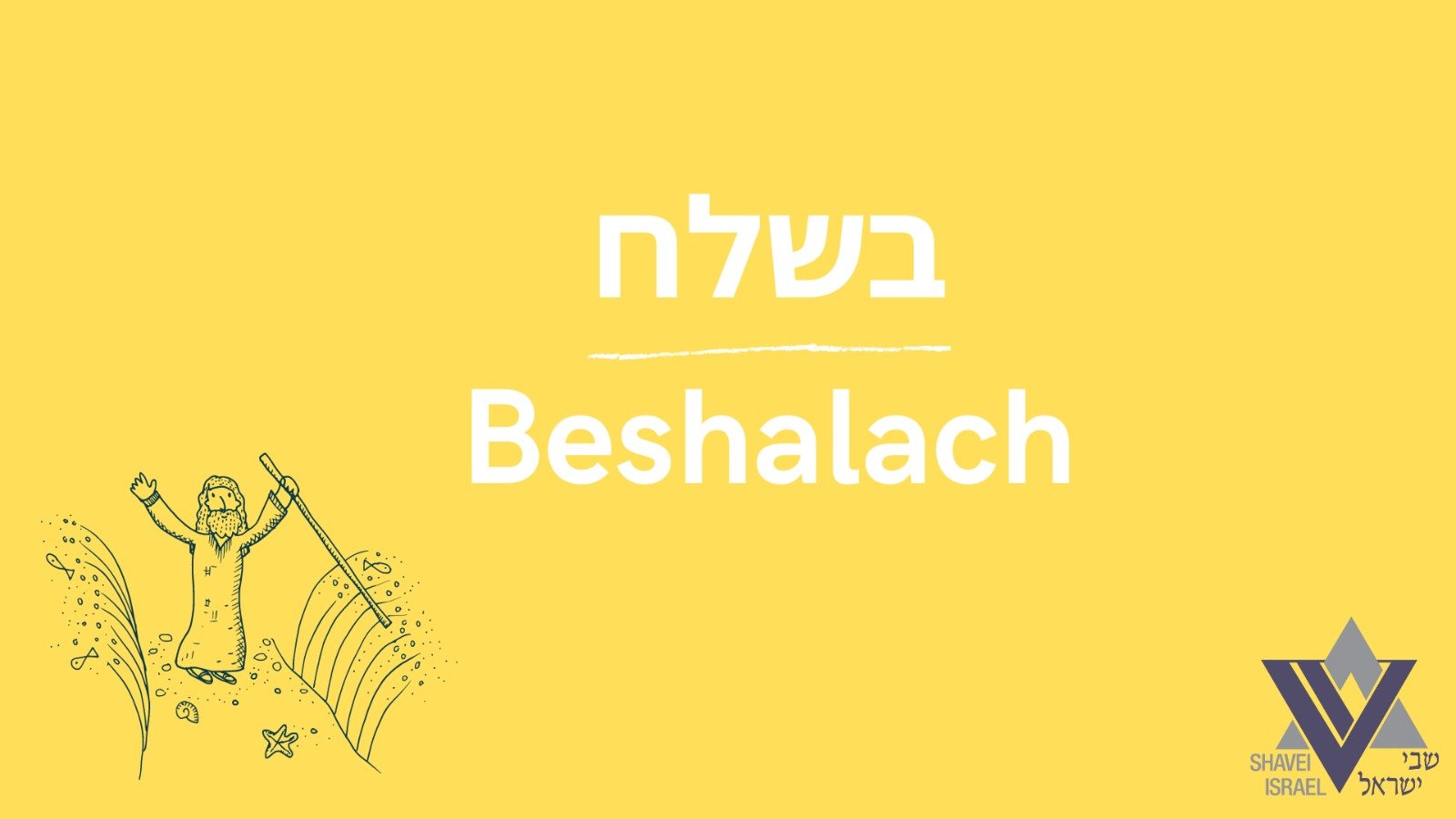 Paro pursues, the sea splits, the people sing.  The people traveled and complained for water in Mara, for bread and meat in the Desert of Sin and for water in Refidim.  Amalek attacked and was defeated.

1st aliya (13:17-14:8) G-d guides the Jews in the direction of the Sea.  Moshe takes Yosef’s bones.  A cloud guides them by day, fire by night.  G-d instructs them to avoid the straight route to the Land of Israel for fear that return to Egypt will be too easy.  Rather camp at the sea so that Paro will notice.  I will harden his heart and he will pursue, in order that Egypt will know that I am G-d.  Paro led his elite chariots in pursuit.

Our parsha introduces a new chapter in the history of the Jewish people: the chapter of national freedom.  A cloud has hung over the people from the moment Avraham was told “your people will be afflicted in a foreign land for 400 years”.  7 complete parshas, from the sale of Yosef til now, have told the story of that affliction.

But now with freedom comes the challenge of living.  Being a free people is a wonderful concept but a hard reality.  It is almost easier to live hoping for freedom than to actually be free.

Even G-d Himself is concerned that the people will balk at the uncertainties of freedom; they will wish for the comfort of the certainties of slave life.  And will want to return to Egypt.  Hence He diverts them to a circuitous route.

2nd aliya (14:9-14) When Paro’s army approaches, the people are afraid.  They cry to G-d and say to Moshe: why did you bring us out of Egypt to die in the desert?  We would have preferred to be slaves in Egypt than die in the desert.  Moshe tells them not to fear, for they are about to see G-d’s redemption.

The focus of the Torah changes dramatically.  There have been 4 main figures in this story: G-d, Moshe, Paro and the Jewish people.  But one has been absent from most of the story: the Jewish people.  We have heard precious little about the Jewish people in the entire story of the Exodus.  Moshe, upon G-d’s direction confronted Paro.  Moshe received the mitzvot before the plague of the firstborn.  All we hear of the Jews is that they did all that G-d commanded concerning the pesach offering.  Even the dramatic night of the Exodus, when Paro ordered them to leave, we hear only of their receipt of gold and silver and scrambling for provisions, with no time for the dough to rise.

What about joy and celebration?  And of fear; concern, fear of the unknown, fear of change, fear of vulnerability, fear of retribution from Paro?  What of their emotions, their thoughts?

All of that changes here.  Now we hear of their struggles, their worries, their concerns.  Because up until here, the narrative has been from G-d’s perspective – in order to teach the lesson of G-d’s Hand in the world.  Now the focus shifts to the Jews.  We have learnt His lessons.  Now we have to live it.  And that brings us to fear, joy, uncertainty, disappointment, and vulnerability – all that makes people human.

3rd aliya (14:15-25) G-d instructs Moshe to raise his hand so the sea will split.  And that He will harden the heart of Egypt in order that He be glorified through Paro and his entourage.  And Egypt will know I am G-d.   Moshe did so; the people entered the dry land in the sea with the waters as walls on both sides.  The Egyptians followed; at morning they became trapped in the sea.

4th aliya (14:26-15:26) The water returned and drowned all the Egyptians.  The Jewish people saw the Egyptian dead, saw the Hand of G-d, feared G-d, believing in Him and Moshe.  Moshe and the people sang “Az Yashir: I will sing to G-d, my strength, my savior, my G-d.  He is the One of War.  Your Hand is powerful, Your Hand vanquishes enemies.  Nations will fear Him.  G-d will reign forever.”  Miriam led the women in song.  Moshe led the people to the desert to Mara.  The people complained for water.  G-d instructed Moshe to throw wood and sweeten the water.

In the great song at the sea, we have emotion released.  The people sing.  Divine redemption demands a human response.  In fact, when we quote the exodus from Egypt in our tefila, we inevitably mention the Shira – people need to sing when blessed with redemption.

Here we find joy, appreciation, elation and faith.  And while the entire people sing with Moshe, the song is curiously in the first person singular: I sing, My strength (the English doesn’t note singular but in Hebrew “Azi”, my, singular, strength.)  This is personal, individual – mine, not ours.  We all sang the song at the sea; yet in the singular.  My G-d saved me.

In fact, though I am merely speculating, this could be the source for the phrase in the Haggada “Each person is required to view himself as leaving Egypt”.  If we are exact in recounting the story in Egypt, we must note that each person, individually, personally sang the song in the singular: My G-d saved me, My G-d fought the battle.  And so, if we want to tell the story of the Egypt accurately at the seder, we too must feel individually our place in that story, just as the individual Jew did at that time.

5th aliya (15:27-16:10) They traveled to the desert of Sin.  They complained: oh that we would have remained in Egypt with the abundance of bread and meat.  The manna was provided in the morning: gather enough for a day, on Friday for 2 days.  G-d appeared in a cloud.

The series of complaints begins the sticky business of being a people.  However lofty freedom be, human concerns are often more immediate.  They complain for water, bread, meat and water again.  Moshe is exasperated.

6th aliya (16:11-36) Meat will come in the evening.  Each person shall gather manna daily for their needs.  Some people saved for the next day; it spoiled.  And some went to gather on Shabbat.  G-d questioned: how long will you resist doing My commands?  G-d has given you Shabbat, hence gives you double on Friday.  Aharon, take a portion of manna to preserve forever.  The Jewish people ate the manna for 40 years.

Shabbat precedes the giving of the Torah.  The Mitzvah of Shabbat is the 4th of the Ten Commandments.  Yet, here already, before Mt. Sinai, is the notion of Shabbat.  Prepare what you need on Friday.  Gather double on Friday.  Do not gather on Shabbat.  Because none will fall.

There is an irony to give the manna and Shabbat at the same time.  6 days you shall work.  The seventh is a day of rest.  But, they are being given their food falling from heaven.  What work are they doing for six days?

Here, in a non-work environment, there is Shabbat.  It is meant not only as a day off from the hard work of the week.  It is a holy day, a rendezvous with the Shechina.  The lack of work is a means to the end of spiritual focus.  An intimate day with the Shechina is meaningful – whether after 6 days of work or not.

7th aliya (17:1-16) There was no water in Refidim.  The people complained, as did Moshe.  Moshe was instructed to hit the rock; water was produced.  Amalek attacked in Refidim.  Yehoshua defeated Amalek.  A remembrance of this war need be recorded.

The juxtaposition of the war of Amalek with all that came before is instructive.  The Divine provided us with: redemption from slavery, intervention at the sea, water, food, meat, water again.  It would seem that Amalek is attacking that reality.  A people with a G-d that protects and provides – that is a people I attack.

The enemies of the Jewish people view us as the people of G-d.  A people protected by His Hand.  That provokes jealousy, resentment and denial.  Of that we need no commentary.