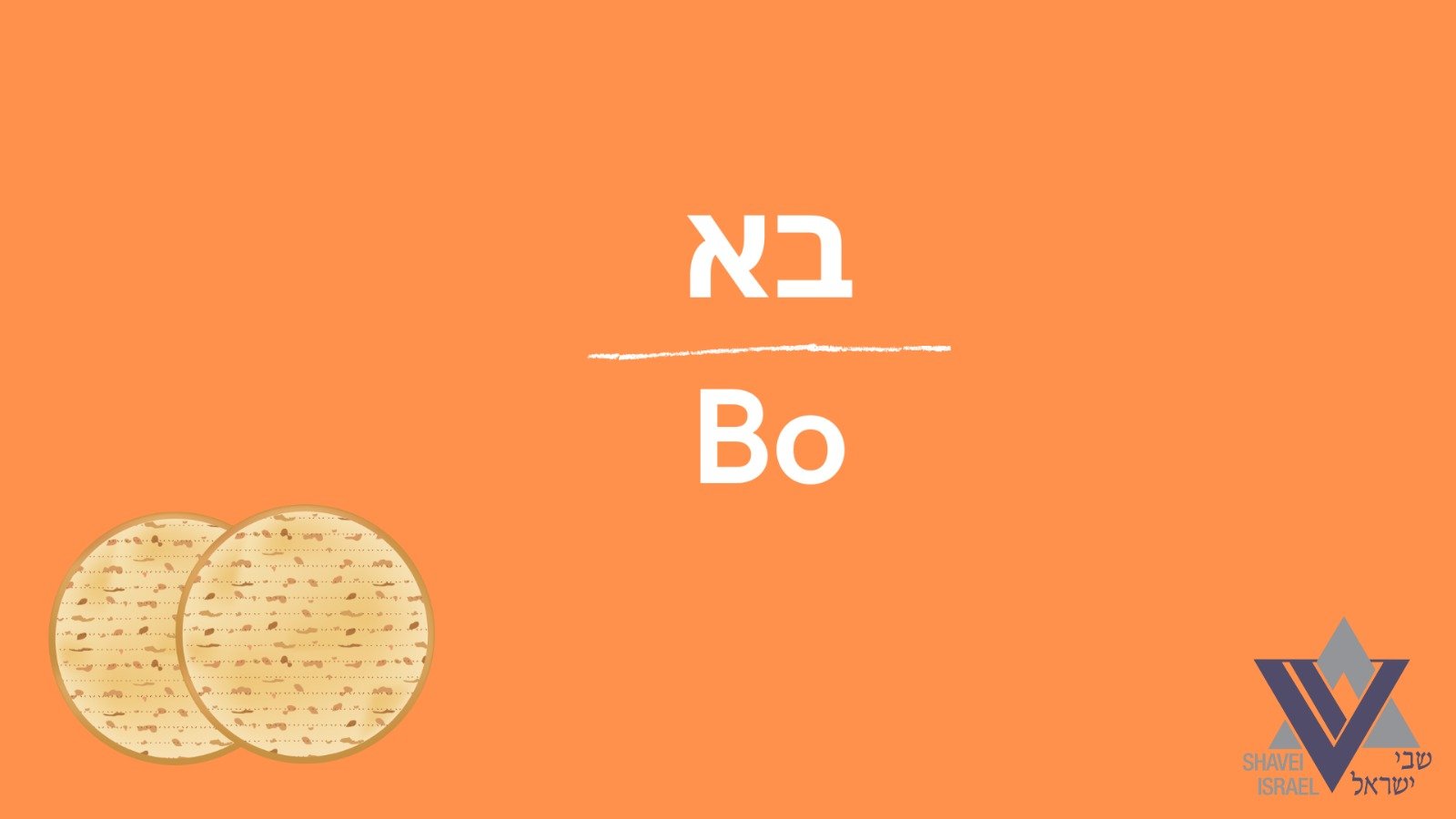 The 8th and 9th plagues occur.  Before the 10th, death of the first born, the mitzvot of Korban Pesach and of Matza are given.  The first-born die.  The Jews are sent out of Egypt.  Mitzvot are given to commemorate the momentous event of the Exodus from Egypt.

1st aliya (10:1-11) The eighth plague: locusts.  Moshe and Aharon come to Paro: locusts will swarm, eating all vegetation left from the hail.  They leave.  Paro’s advisors warn him that Egypt is heading to destruction.  Moshe and Aharon are brought back.  Paro says: go and serve your G-d.  Who is going?  Moshe replies: young, old, men, women, animals.  Paro refuses: only men.    And sends them out.

The plagues have patterns.  One pattern in these last plagues seems to be a reversal of creation.  Back in the creation story, light is created on day 1.  The heavens on day 2.  The land and vegetation on day 3.  In reverse: the locusts eat all the vegetation on the land.  They swarm from the sky.  In darkness, Moshe lifts his staff to the sky.  And then; no light.  As if the world of Egypt is unraveling back to chaos.

2nd aliya (10:12-23) The east wind brings in the locusts.  They darken the earth, eating all vegetation.  Paro quickly calls Moshe and Aharon: I have sinned to G-d your G-d.  Pray to remove this death from me.  Moshe does.  The wind brings the locusts back to the sea.  Paro does not send the people out.  The 9th plague: 3 days of darkness.  There is light for the Jews.

While we shouldn’t have a favourite child, we can have a favourite plague.  Kids like frogs.  My favourite is darkness.  For what it says about the Jews.  If it is dark in Egypt for 3 days – oh yea, why 3 days?  None of the other plagues tell us how long they lasted.  Why did the darkness last 3 days?  Where else in this story does 3 days come up?

Moshe asked Paro to allow the Jews to go 3 days journey into the desert to serve G-d.  If it’s dark for 3 days – perfect – leave, go the 3 days and by the time the lights come on, the Jewish people are at the Sea.  Why didn’t they leave under cover of 3 days darkness?

Because the story is not the Jews march to freedom.  A freedom march would have a charismatic leader, who rallies the people to fight the injustices done to them, leading a people who yearn to gain their freedom.  But that is not the story.  The Jews are in Egypt hundreds of years.  No insurrection.  Moshe is 80 when called for his mission – kind of late in life to lead your people.  But leading the people is not his idea; it’s thrust upon him.  He refuses.  Moshe is not a charismatic leader, a smooth rhetorical speaker, a master legislator.

The story of the Exodus is His story.  He chooses Moshe, against his will, to be his pawn.  And look at the Jews – they could have run for it – but they are not freedom marchers.  They leave completely by the will of G-d, not their own wiles.  When they had the chance to run – they didn’t.  The reluctant leader and the passive followers mean only one thing: their redemption was not their own doing, but His doing.

3rd aliya (10:24-11:3) Paro calls Moshe: Go serve G-d, even your babies.  Just leave the animals behind.  Moshe replies: we need to take them – we don’t know what to offer til we get there.  Paro: don’t ever see me again or you will die.  G-d tells Moshe that after the next plague they will go free.  And the Egyptians will equip the people with gold and silver.

Justice is a central theme of the Torah.  The injustice of the slavery must be righted – hence the promise that the Egyptians will give gold and silver, a small righting of the wrong of the slavery.

4th aliya (11:4-12:20) Moshe tells Paro of the impending plague of the first-born.  Your people will plead with us to leave.  Moshe leaves angrily.  G-d tells him that Paro will not listen.   Moshe and Aharon are given the instructions for the Korban Pesach: on the 10th of the month take a lamb for the family, guard it until the 14th, the entire Jewish people shall offer it, consume it at night roasted with Matza and Maror, with your staff in your hand, shoes on your feet.  Meanwhile I will smite all first born at midnight.  This day and its celebration will be marked eternally.  7 days eat Matza; no chametz shall be eaten for 7 days.

Matza is to be eaten on the night of the exodus – before midnight.  But I thought we eat Matza because of the haste of the exodus?  That doesn’t happen til tomorrow.  Rav Menachem Liebtag points out that the seder on the night of the exodus is an anti-Egypt dinner.  Animals are sacred – we roast one.  And bread that rises is an Egyptian development.  All bread in these parts is flatbread – pitas, laffa.  Bread in fancy bread molds is Egyptian.  So, at the seder in Egypt – no fancy Egyptian bread, just Matza.

5th aliya (12:21-28) Moshe instructs the people in the Pesach, including marking their doors with its blood.  You are not to leave your home on that night.  This holiday will be observed forever; when you get to the land, observe it.  Your children will ask you why; tell them because G-d passed over our homes.  The people hearing these instructions bow and go and do exactly as G-d commanded Moshe and Aharon.

Imagine the faith necessary to follow these instructions.  Ok, G-d has promised that the first-born Egyptians will be smitten on the 15th at midnight.  And with that, we will go free.  But for slaves to brazenly prepare to slaughter the sacred animals of Egypt, not on one day, but take it and guard it for 4 days, offer it, roast it.  Why roasting on an open fire?  I don’t know, I speculate, but, well, you can’t hide the smell of a barbecue.  The whole neighborhood enjoys it.  The Jews are commanded to celebrate, unashamed, on full display, burning what is sacred to the Egyptians, right in their faces – before they go free!

And to magnify the confidence, the faith, the assurance, know that you will observe this forever.  Before the exodus happens, they are planning to celebrate it forever.  That is confidence.  Faith.

When Moshe instructs the people, they did exactly as G-d commanded.  Wow.

6th aliya (12:29-51) At midnight, all the first-born in Egypt die.  Paro calls Moshe and Aharon and orders them to leave to serve G-d.  Quickly, so all of Egypt is not smitten.  600,000 adult men were amongst the Jews who left Egypt.  The dough was baked as Matza as they could not wait for it to rise.  The sojourn in Egypt was 430 years.  G-d tells Moshe and Aharon the rules of the Pesach offering: only circumcised slaves, not employees, the whole people, don’t take it out of the home, one rule for all the people.

Tbe Exodus from Egypt is a core belief: that G-d shapes Jewish history, with a yad chazaka and an outstretched arm.  We believe in an all-powerful G-d.  Who gave us the Torah.  But Who, in addition, has a plan.  He intervened in the affairs of man, brought us to Him.  G-d’s Hand in history has too often, in fact most often, been obscured from our view.  Where is He leading us, how is He guiding us?

We, the privileged generation, oh, how privileged, we, who have returned to our Land, we are truly privileged; because when we read of His Yad Hachazaka and His Zroa Netuya, His strong hand and outstretched arm – we can give a nod, yes, affirm, that He does guide our people, does intervene in our history.

7th aliya (13:1-16) G-d commands: all first-born people and animals of the Jewish people shall be holy to Me.  Moshe tells the people: remember this day, for on it G-d took you out of slavery with a strong Hand.  When you come to the land of Israel, observe this: eat matza 7 days, rid the house of chametz, tell your children that it is for this that G-d took us out of Egypt.  And bind them as a sign on your arm and remembrance between your eyes.  Every first-born animal is a dedicated offering.  When your child asks what is this, tell them that G-d took us out of Egypt.  Bind this as a sign on your hand and a guide between your eyes, as G-d took us out with a strong hand.

The story of the Exodus need be remembered in its details through Mitzvot.  Including binding tefilin on our hand, our weaker arm, for He has the strong arm, and on our heads.  For all our actions and all our aspirations, for all of history, need be guided by that story of His love, taking us to be His beloved.