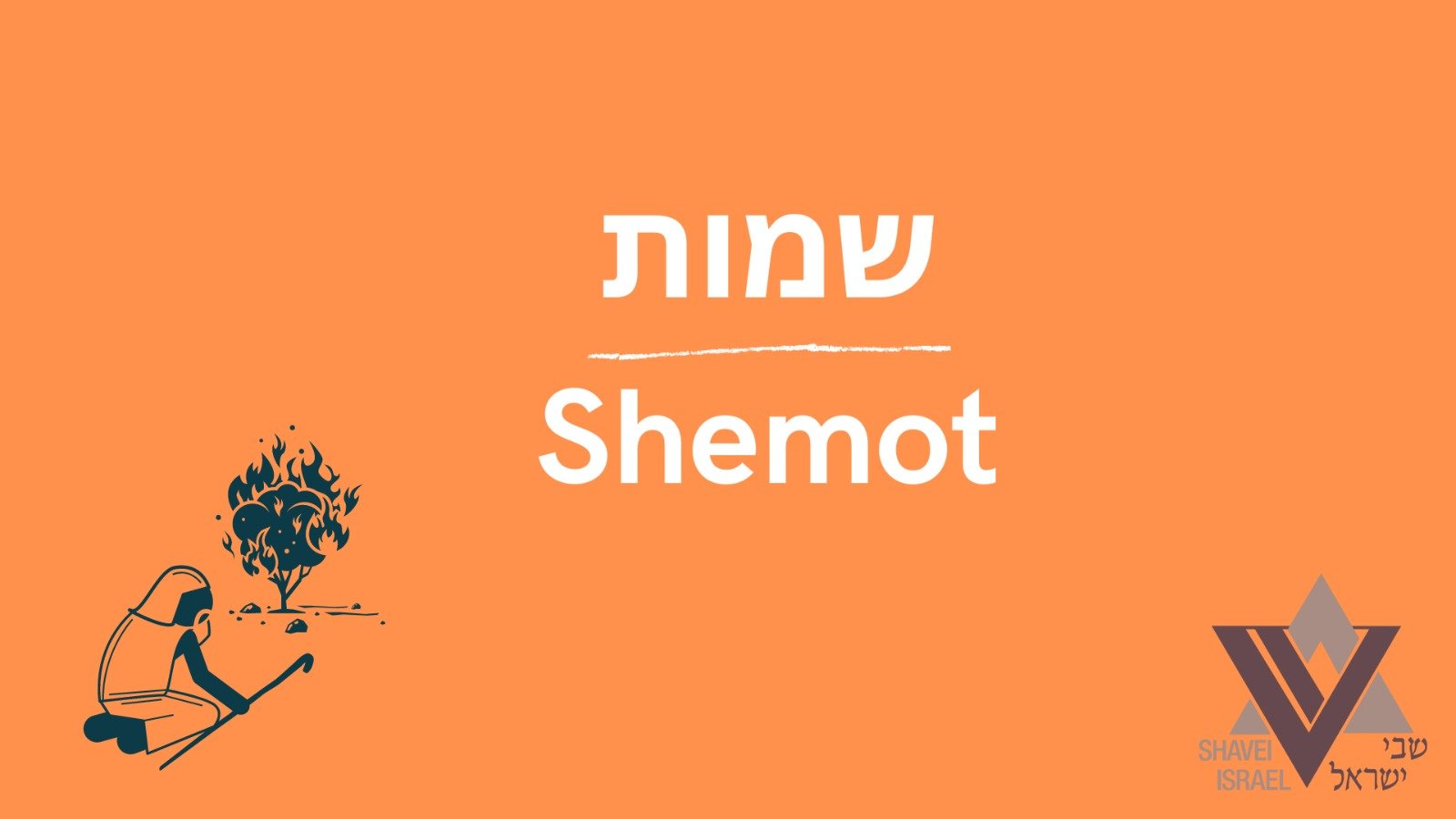 The Jewish people are in Egypt.  A new Paro is concerned with the size of the Jewish people.  He decrees hard labor, infanticide and then actively drowning the male babies.  Moshe is born, raised in Paro’s daughter’s home.  After seeing the Jews mistreated, he flees to Midian, marries and settles there.  At age 80, Moshe encounters the burning bush.  G-d instructs him to go to Paro and demand, in G-d’s name, to free the Jewish people.  Moshe, after attempting to refuse this mission, goes to Paro.  Paro increases the burdens.  The people complain.

1st Aliya (1:1-17) 70 Bnei Yisrael descend to Egypt.  They grow exceedingly numerous, filling the land.  A new king who knew not Yosef arises.  Afraid that the Jews would join with enemies of Egypt, he seeks to weaken their numbers.  A labor tax is followed by oppressive labor.  Then the midwives are instructed to kill the Jewish babies.  The midwives fear G-d and do not heed Paro’s directive.

In Shemot G-d and man switch places.  It is the story of Divine control of Jewish destiny.  He is the Main Director, the Jewish people the mere stage actors.  He no longer lurks, with repeated promises.  He acts, dominates, controls, manipulates.  He initiates, communicates, commands.  Later, at Sinai, He reveals Himself.

But His appearance begins only when we hit bottom.

Paro acts to weaken the Jewish people.  Vicious actions, including murder.  The midwives fear G-d, refuse to murder.  There is no mention of G-d’s actions.  We have seen this before.  G-d’s name is absent from the sale of Yosef, as it is here.  Spiraling downward we can do on our own.  Man does a mighty fine job of cruelty all on his own.  G-d appears when we hit bottom.

2nd Aliya (1:18-2:10) The midwives defend their actions to Paro.  Moshe is born, placed in the water in a basket.  Paro’s daughter rescues him.  Miriam arranges for Moshe’s mother to nurse him.  He is returned to Paro’s daughter and named Moshe.

When Moshe is born his mother “saw that he was good”.  And he was placed in the water, albeit in a basket.  Those 2 elements, water and “it was good”, immediately remind us of the first day of creation.  In the beginning “the spirit of G-d hovered over the waters” (Genesis 1:2).  And when light was created, “G-d saw the light and it was good.”  Moshe’s being placed in the water and his mother “saw that he was good” could be the Torah’s way of saying there is a new creation story taking place: with Moshe’s birth, a new world dawns for the Jewish people.

3rd Aliya (2:11-25) Moshe matures.  He goes out to see the travails of his brothers.  He defends a Jew by killing his Egyptian aggressor, and then saves a Jew from a Jewish aggressor.  He flees for his life to Midian, aids Yitro’s daughters, is welcomed by Yitro, marries Zipporah, has a child Gershom.  “For I am a stranger in a strange land”.  G-d sees the suffering of the Jews and remembers his covenant with Avraham, Yitchak and Yaakov.

Moshe names his son Gershom, for “I am a stranger”.  Which strange land is he referring to?  Being a Jew in Egypt?  Or being an Egyptian in Midian?  Where is Moshe’s home?

The story to this point is the story of people; G-d has yet to appear.  In a world without G-d’s presence, there are good people and bad people.  Paro, evil.  Midwives, good.  Moshe’s parents, brave.  Paro’s daughter, good.  Moshe’s sister, altruistic. Egyptian slave master, cruel.  Jews struggling, violent.  Yitro, welcoming.

And Moshe?  Goes out.  Concerned.  Helps those who need help.  Feels angst; a stranger.

G-d appears.  His name appears 5 times in 3 verses.  Everything changes now.  Or perhaps not.  All the human activity to this point; has He orchestrated it, or is it people doing what people do?  Some good, some not?  Or mere puppets in the Hand of the Puppeteer?

4th Aliya (3:1-15) Moshe and the burning bush.  Moshe, Moshe, Hineni.  G-d speaks, Moshe cowers.  G-d tells him:  I have seen the suffering of My people.  I will save them from Egypt and bring them to the land of milk and honey.  I am sending you to go to Paro and he will release my people from Egypt.  Moshe objects: who am I to go to Paro?  And the Jewish people will question who sent me.  G-d says: tell them the G-d of their forefathers, Avraham, Yitzchak and Yaakov sent you.

The entire story of the Torah changes here.  G-d moves from the unseen force behind human action to directly dictating human activity.  He tells Moshe that He will take the Jewish people out of Egypt and bring them to the land of Israel.  Up until now, the Jewish people have been promised the land but have lived only with the promise, not with its fulfillment.  They have not seen the Hand of G-d but have rather detected it behind the events.  As Yosef said “G-d has brought me to Egypt to save the family.”  He never heard that.  He peered behind the veil and detected it.

Now the veil is drawn.  Moshe is told in vivid detail exactly what will transpire.  The Jews will be sent out by Paro.  The story of the Exodus from Egypt is a pillar of Jewish belief because it is a blatant, direct display of G-d’s Hand in our history.  It is His Hand in full display, not behind the veil.

5th Aliya (3:16-4:17) G-d continues: Gather the people.  Tell them that I will take them to the Land.  They will listen.  Go to Paro.  I know he will not listen.  I will smite the Egyptians.  You will be loaded with gold, silver and clothing from the Egyptians.  Moshe is still convinced that the people will not believe him.  G-d gives him signs:  staff turns to snake and then back, hand turns leprous and then back.  And water to blood.  Moshe objects: I am not a good speaker.  G-d says: I give speech to man.  I will send Aharon with you.  He will speak.  Take your staff.

As Moshe hears more details and is given signs to bring to the people, he reluctantly acquiesces to being the human conduit for the Divine Hand.  He realizes that his human weaknesses are irrelevant; he is merely the puppet in the hand of the puppeteer.  The Exodus from Egypt is not the story of a great, charismatic leader who leads his people from oppression to freedom, displaying the power of human will in the face of injustice.  It is the story of the Divine Hand guiding human events through a reluctant leader.  This is not Moshe’s story.  It is the Divine’s.  Moshe reluctantly agrees to his role in this, the most momentous display of Divine Providence in history.

6th Aliya (4:18-31) Moshe gets Yitro’s blessing to return to Egypt.  G-d tells Moshe that those seeking his death have died.  G-d tells him to tell Paro: G-d says Israel is my first born.  Send out my son, for if you do not, I will slay your first born.  Zippora circumcises her son.  Aharon greets Moshe.  They gather the people.  The people believe that G-d will redeem them.

G-d adds one more thing to Moshe; Israel is My first born.  As if to say – “Moshe, this is a story of love.  I view the Jewish people as my beloved first born.”  And.  Refusal by Paro will result in Divine punishment.  Our western ethos is uncomfortable with these central principles of Judaism: G-d’s Hand in history, G-d’s love for the Jewish people, and Divine punishment.  As Rabbi Sacks, z”l, said; Radical then.  Radical now.

7th Aliya (5:1-6:1) Moshe and Aharon approach Paro, requesting a 3-day journey to the desert to celebrate.  Paro refuses.  He increases the workload.  Conflict arises between the Jewish workers and the Egyptian supervisors.  The Jews criticize Moshe for increasing their burden.  Moshe complains to G-d.  G-d reassures him that through a strong hand, Paro will send them out.