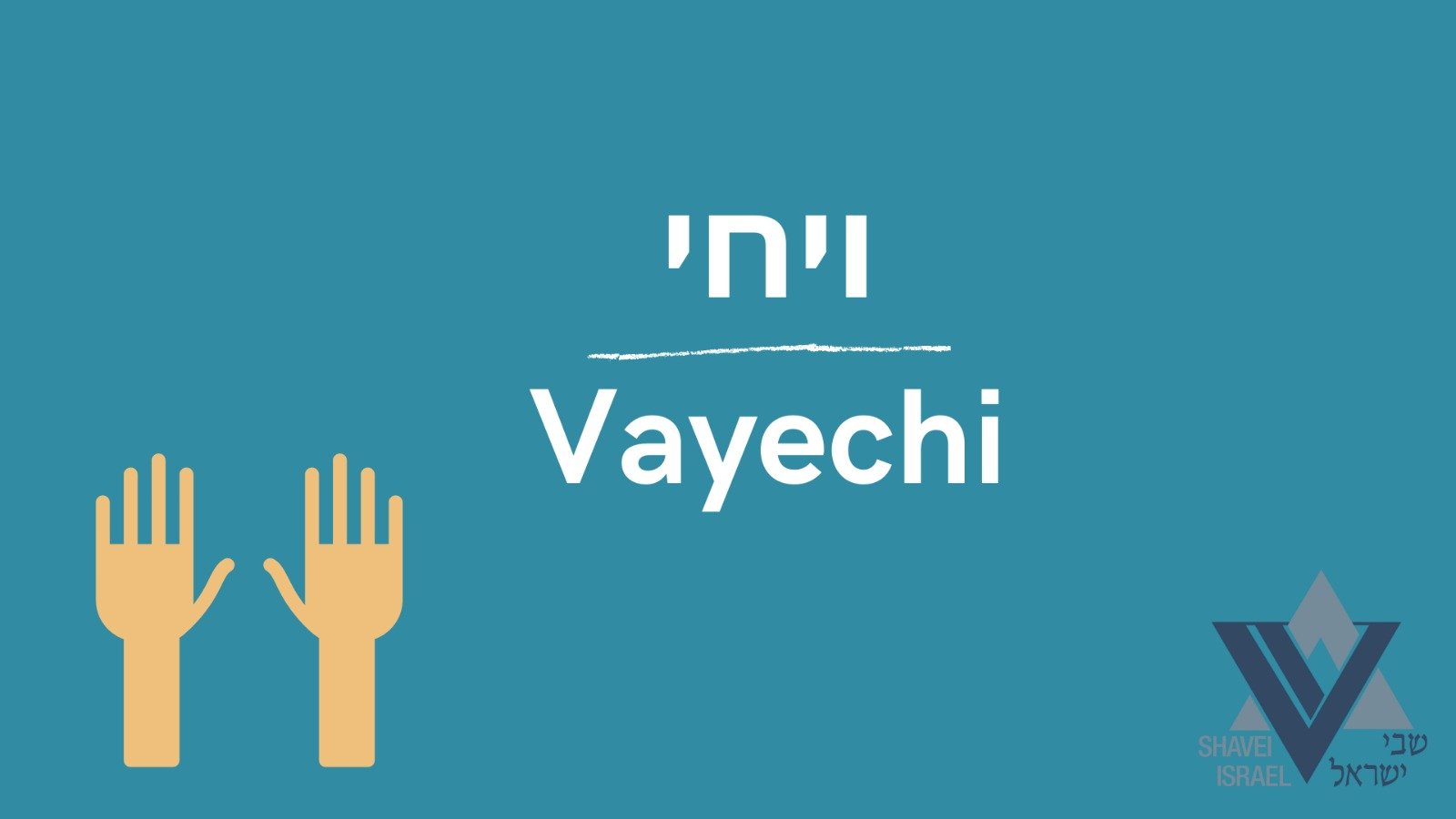 Vayechi means life, yet the parsha begins with talk of death and ends with death.  Yaakov demands to be buried in Israel.  Yosef swears he will.  Yaakov elevates his grandchildren, Ephraim and Menashe to be equal to his children as tribes settling the land of Israel.  He blesses Ephraim and Menashe.  Yaakov calls all his sons and blesses each of them.  Yaakov dies.  He is buried amidst great honor in Maarat HaMachpela.  The brothers are afraid that now Yosef will exact revenge.  Yosef reassures them.  Yosef asks to be buried in Israel when the Jewish people return.  He dies and is placed in a coffin in Egypt.  The beloved book of Breishit is concluded.

1st Aliya (47:28-48:9) Yaakov asks Yosef to swear that he will not bury him in Egypt but rather with his forefathers.  Yaakov falls ill.  He tells Yosef that G-d appeared to him in the Land of Israel; he was told his descendants would have a permanent hold in the land of Israel.  Ephraim and Menashe will be treated as equal tribes in dividing the land.  Rachel died on the way into the land and I buried her there.

The Jewish people are ensconced in Egypt.  And that is precisely the theme of this parsha.  Yaakov is fighting, pushing, perseverating on one theme; this is not home.  All he talks about is the land of Israel: don’t bury me in Egypt, Ephraim and Menashe will be equals in dividing the land, may they prosper in the land (of Israel); he blesses the sons emphasizing their locale in the land.

Yaakov is insisting: we are here but we’re going to be there.

In fact, were I choosing where to begin this parsha, I would have backed up one verse.  (Though the word “Vayechi” has a nice ring to it).  The last verse of last week’s parsha is: Yisrael dwelt in the land of Egypt, Goshen, held it, and was exceedingly prosperous.

That is the exact same verse (almost) of the beginning of Vayeshev.  There, Yaakov wanted to settle, take root, build a nation in Israel.  Now, here he is doing exactly that; settling, taking root.  But in the wrong place; in Egypt, not Israel.

Why does Yaakov mention that Rachel died suddenly and was buried on the way to Beit Lechem?  Perhaps this is a tender moment of father and son.  He is speaking to Yosef.  “Yosef, you lost your mother tragically, suddenly.  Rachel, my dear wife.  Your mother.  You, so young, it was all so sudden, you did not have a chance to bury your mother in the way I am asking you to bury me.  You and I shared that tragic time.  Now, it is so different.  I elderly.  You, a grown man, of great success.  Maybe we would have had more children.  In her memory, in her honor, your 2 sons take their place as full sons of mine, to fill the void that might have been.”

A wistful, tender, shared moment, amidst instructions of national import.

2nd Aliya (48:10-16) Yaakov cannot see.  He hugs and kisses Ephraim and Menashe.  Yaakov places his right hand on Ephraim, the younger; left hand on Menashe the older.  G-d before whom my forefathers walked and Who protected me, bless these.  And may they increase in the land.

You can’t but hear echoes of Yaakov’s father Yitzchak: blind, gave the bracha to the younger, not the older.  But here Yaakov does not bless just one.  He blesses both with the same bracha.  That changes everything.  The era of “one is in and one is out” is over.  All are part of the Jewish people.  And this is grandchildren.  Grandchildren means long term, future, legacy, all the children.

3rd Aliya (48:17-22) Yosef does not like the switch of hands.  He corrects Yaakov.  Yaakov demurs.  Both will be great, though the younger will be greater.  He blessed them both: The Jews will bless with “May G-d make you as Ephraim and Menashe.”

Yosef suffered from his father’s favoritism.  He does not want the same for his children.  But Yaakov insists.  Because there is a difference between exclusion and distinction.  Yaakov is not excluding anyone.  Both are in.  Both are blessed.  Jews in the future will bless with both Ephraim and Menashe.  But Yaakov tells Yosef:  while from now on all Jews are part of the Jewish people, while all are in, they are not identical.  Some will be greater, some less great.

4th Aliya (49:1-19) Yaakov calls his sons to tell them what will occur with them.  He addresses them individually.  Reuven, my first born.  Shimon and Levi, due to your anger, do not associate my honor.  Yehuda, you saved my child from destruction; authority will not depart from you.  Zvulun will dwell on the coast.  Yissachar is a powerful worker; he will see the land’s goodness and beauty.  Dan, the nation’s judge.  G-d, we wait Your salvation.

One word is missing from Yaakov’s address to each of his sons: G-d.  The Torah does not say he blesses his sons.  Blessings are from G-d.  Yitzchak blessed his son:  May G-d give you of the dew of the heavens…  Even Yaakov himself just blessed Ephraim and Menashe: May G-d before whom my forefathers walked bless these young men.  And Yaakov told Yosef the Jewish people will bless: May G-d bless you as Ephraim and Menashe.

Blessings are from G-d.  Why does Yaakov not mention even one time G-d’s name in his address to his sons?  Because he is not blessing them.  He is describing them.  He is emphasizing to them, as he is about to die, that their place is not in Egypt.  Their place is in the land of Israel.  And they will get there, with all their varied talents.  To build a nation.  A nation needs leaders, merchant marines, hard working agriculture, justice.  Yaakov is stating as a matter of fact to his sons what the state of the Jewish people in the land of Israel will look like.  You will all be included because all your talents will be needed.  And you are all different and essential.

5th Aliya (49:20-26) Yaakov’s address to each son continues.  Gad, a legionnaire.  Asher, bread and delicacies.  Naftali, a swift messenger.  Yosef had adversity but with G-d’s help prevailed and was enormously blessed.

With the description of Binyamin in the next aliya, the descriptions are complete.  The Jewish nation will be built in the land of Israel as a result of all of you.  None are out, all are in.  It will be a nation of agriculture, military, leadership, bounty, justice, commerce, and trade.  It will be a colorful, diverse and successful nation.

Yaakov is driving hard, fighting, persevering in his message: we are only here in Egypt temporarily.  The land of Israel is where we will be.

6th Aliya (49:27-50:20) Yaakov’s end is near.  He commands his sons to bury him in Maarat Hamachpela, describing in detail Avraham’s acquisition of it and the burial there of all the avot and imahot.  Yaakov dies.  Yosef gets permission from Paro to bury Yaakov in Israel.  A great procession accompanies his burial.  Upon the return to Egypt, the brothers tell Yosef that Yaakov commanded them to tell Yosef to bear the sin done to him by them.  Yosef cries upon hearing this.

Yaakov’s burial entourage is full of honor and respect to him.  The Jewish people have earned great fame.  At the same time, the end of the book of Breishit finds the Jewish people settled in Egypt, with no end in sight.

7th Aliya (50:21-26) Yosef counters that G-d has brought them to Egypt so that they may survive.  Yosef sees his great grandchildren in Egypt.  Yosef has the brothers promise to bring his bones to Israel when they are redeemed.

Only problem is that he is wrong.

You can’t fault Yosef.  He is correct in what he sees.  But he doesn’t see what we see.  He sees the little picture.  We have the benefit of the big picture.  We know what happens next.  Many years in Egypt, massive growth, Paro, enslavement, suffering, and finally, redemption.  Sure, the decent of the Jewish people to Egypt was G-d’s plan.  But it was the big plan, the dramatic plan that ends with the Exodus from Egypt.

Yosef has unwittingly been the cause of the descent of the Jewish nation to Egypt.  He thought it was G-d’s plan to save the family.  But it is really G-d’s plan to ensconce the entire Jewish people in Egypt.  For it to grow to a nation.  Then to redeem the entire Jewish people from one place at one time.  Yosef didn’t know what was to come.  But we do.