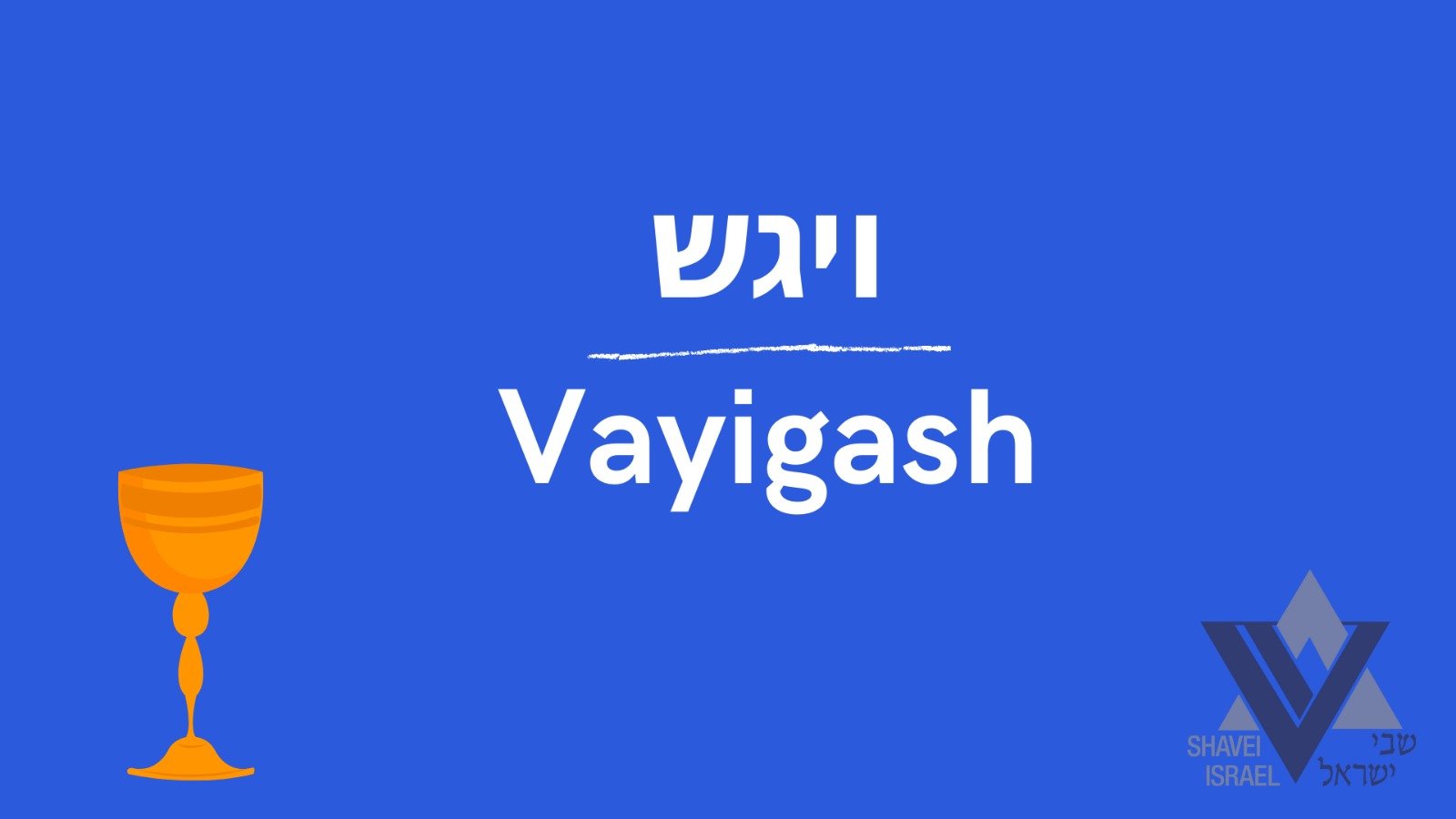 The Parasha begins in the middle of the story.  Yosef has just told Yehuda and all the brothers that Binyamin, the thief, will become a slave to Yosef.  All the others are free to leave.  Our Parasha begins with Yehuda’s long and impassioned plea to Yosef to allow Binyamin to return home, while Yehuda will assume his place as a slave.  Yosef is overcome.  He orders all to leave.  And tells his brothers, “I am Yosef”.  He instructs them to bring Yaakov.  Paro sends the brothers home with wagons to bring Yaakov and the rest of the family.  Yaakov reunites with Yosef.  The entire family settles in Goshen.  Yaakov meets Paro.  The famine gets worse.  Yosef acquires all of Egypt for Paro.

1st Aliya (44:18-30) Yehuda pleads with Yosef: this is our father’s dear child.  While you asked us to bring him here, we told you that leaving his father would break our father’s heart.  When we needed to buy food, our father told us that if anything happened to Binyamin, he would descend to the depths.  And now, if I return to my father without the boy, and his soul is bound to his….

The aliya ends suspended in air.  Yaakov and Binyamin, their souls are bound…  There could be no better way to convey the drama; ending the aliya with their bound souls.

Yehuda earns leadership by this dramatic moment.  He is assuming responsibility.  He hasn’t said it yet, but he will in the next aliya – he will do anything to ensure Binyamin’s return home.  His entire argument is one of concern for his father.  His father will die of a broken heart, losing the only 2 sons from his dear wife.

Now, while Yehuda is the only actor in this aliya and while his actions are heroic and of powerful substance, there is a silent actor; Yosef.  Let’s place ourselves in Yosef’s shoes.  When we hear Yehuda’s words it is familiar to us, because we know the whole story until here.  We were there when the brothers returned home, we heard the interactions with Yaakov, his anguish at the thought of Binyamin leaving.

Yosef knows nothing of this.  What happened when I never returned home?  Was my father pained?  Did he miss me?  We know Yaakov was inconsolable when the brothers brought the bloody coat.  But Yosef doesn’t know.  Everything that happened after he was thrown in the pit is a blank to him.  Is my father alive?  What did he know about what happened to me?  Why didn’t he come seeking me?

Yehuda’s speech to Yosef is like drawing the curtain – Yosef is now privy to what his father thought happened to him, how much his father loves Binyamin, who is like a replacement Yosef to Yaakov.  Dramatic is the moment when Yosef tells the brothers who he is; this moment for Yosef is equally so.  It is a glimpse into the home of his father, a home he has known nothing of for 22 years.  This is the first time he hears that his father was heartbroken at what he thought was Yosef’s death.  He didn’t seek me because he thought I was dead.

2nd Aliya (44:31-45:7) Yehuda guaranteed Binyamin’s return.  He will not be able to bear seeing Yaakov’s pain.  Yehuda will stay in his stead as a slave.  Yosef cannot bear this any longer.  He orders all the others out.  Alone with his brothers he states:  I am Yosef your brother.  Is our father still alive?  The brothers are dumbstruck.  He reassures them that his sale to Egypt was G-d’s plan in order to save the family through this famine.

What did Yehuda say that Yosef could no longer bear?  The commentators read this in the context of Yosef’s intent throughout this story.  Why did he accuse the brothers of being spies?  And demand they bring Binyamin?  And plant his goblet in Binyamin’s bag?  It would seem he is trying to recreate the scene of the crime.  They sold Yosef, their brother as a slave.  Would they sell Binyamin as a slave again; or have they repented?  Yehuda’s offer to stay in Binyamin’s stead is a victory, teshuva.

It could be understood entirely differently.  Binyamin is Yosef’s replacement in the family.  With Yosef gone, Binyamin assumes his place.  When Yehuda relates how much Yaakov loves Binyamin, Yosef is not hearing Binyamin, he is hearing Yosef.  Binyamin is a substitute Yosef to Yaakov.  Yaakov’s love of Binyamin is really his love of Yosef in Yosef’s absence.  Yosef, hearing of his father’s love for him is overcome.  He needs to not only hear, but to see his father.  And that is what he tells his brothers.

Yosef is called Yosef Hatzadik not just because he withstood Potiphar’s wife’s advances.  He mentions G-d 4 times.  His speaks of G-d and he believes all his travails are G-d’s plan.  He overlooks his personal travails by peering into the Divine.  His ascent to rule in Egypt is not him; it is G-d’s plan.  He does not deny his powerful position, but views himself as but a pawn in the Divine Hand to help his family survive.

Why does Yosef give his brothers clothes?  And why, if Yaakov is to come quickly to Egypt, why send him animals laden with food?

5th Aliya (45:28-46:27) Yaakov offers offerings in Beer Sheva.  G-d calls to him; Yaakov, Yaakov.  And he says, Hineni.  Don’t be afraid.  I will go down with you and I will bring you back up.  The entire family descends.  The Torah lists the genealogy of the family; the 70 souls who came to Egypt.

This simple aliya changes everything.  The twists and turns of the story of the brothers is now seen in wide angle; the camera moves from close up, to a wide lens.  Yaakov is thinking Jewish history.  Avraham was told his children will be slaves in a foreign land for 400 years.  Yaakov, while anxious to see Yosef, is nervous about moving his entire family to Egypt.  Will they ever return?  Is he complicit in abandoning the promise that the Jews will live in the land of Israel?

G-d calls him with that phrase that rings of drama:  Yaakov, Yaakov.  Hineni.  G-d reassures him; I will bring you back.

And the next paragraph, the genealogy begins and ends with the same phrase:  these are the Bnei Yisrael that came to Egypt.  Jewish history now leaves the land of Israel.  And will not return for the entire rest of the Torah.  Yaakov was justified in his fear.  This is the moment of exile of the Jewish people from the land of Israel.

6th Aliya (46:28-47:10) Yaakov and Yosef reunite, with hugs and tears.  Yosef plans carefully with the brothers.  They are to tell Paro they are shepherds.  They will settle in Goshen.  Paro agrees to what Yosef has planned.  Yaakov blesses Paro.

The dramatic reunion is 2 verses.  Somewhat anti climactic.  Yosef successfully arranges for his family to be preserved; both materially and by remaining together and away from the Egyptians.

Oh, what a bitter irony.  Because we know what comes next.  The Torah has moved on from the story of Yosef and his brothers and his father.  The Torah is now describing the story of the Exodus from Egypt.  You know how the Exodus story began?  Yosef moved his whole family to Egypt.  He settled them successfully; perhaps too successfully?

7th Aliya (47:11-27) Yosef supports his family.  The food in Egypt becomes scarce; all is precarious.  Yosef acquires gold, livestock and land for Paro.  Save the land of the priests.  The people become slaves to Paro.  Yaakov and the family dwell in Goshen, take root there and prosper.

The irony continues.  Yosef creates a hugely powerful Paro; money, livestock, food stores, slaves.  Control over all of Egypt.  What irony; Yosef has created the first chapter of the Egypt story.  A hugely powerful Paro.  The entire Jewish people in Egypt.  Remember Yosef Hatzadik, so called because he saw G-d’s plan.  As he told his brothers, “G-d has placed me here to save you in the time of famine.”  Well, Yosef was wrong.  He only saw chapter 1 of the story.  The real story is that G-d has placed me here to bring you all to Egypt, to solidify the power of Paro.  That will result in your being slaves.  And leaving Egypt amidst signs and wonders.  Yosef is a pawn.  But in a much bigger story than he can imagine.

Rav Reuven Tradburks is the director of Majon Milton, the English Preparatory Course for Conversion, an association of the Rabbinical Council of America (RCA) and Shavei Israel. In addition, he is the director of the RCA-Region Israel. Prior to his aliyah, Rav Tradburks served 10 years as the Director of the Toronto Vaad Harabonim Conversion Court and as a congregational rabbi in Toronto and the United States.