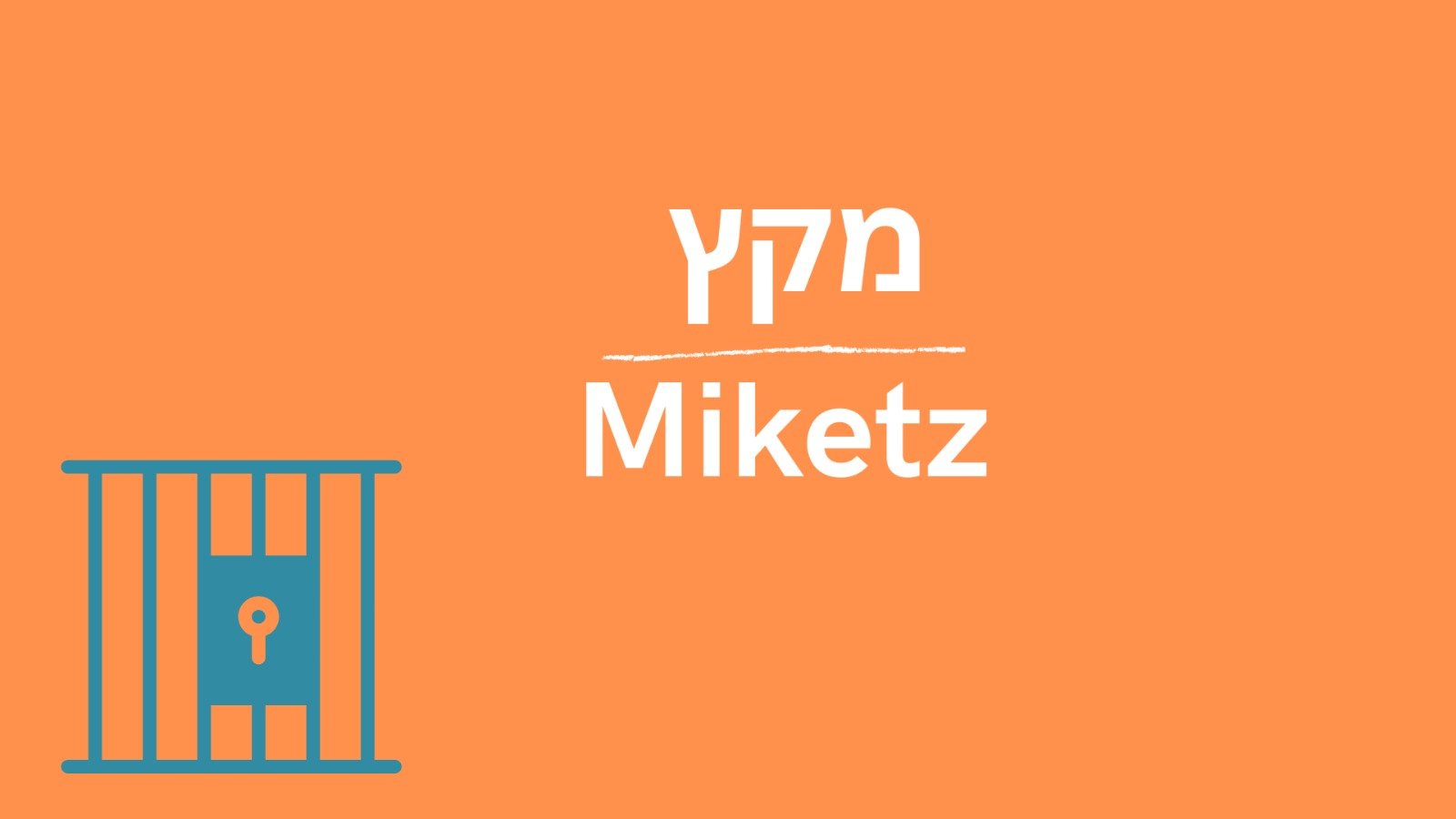 Yosef ascends from jail to complete control of Egypt.  Paro has a dream.  The Butler remembers Yosef in jail.  Yosef tells Paro of 7 impending years of plenty followed by 7 of famine.  Yosef is appointed to manage the hoarding of food in the good years.  When the famine begins, the whole world turns to Yosef for food.  Including his family.  Yosef recognizes his brothers; he accuses them of spying.  Shimon is kept in jail, the brothers return home to bring Binyamin.  When the need for food forces them back to Egypt, Binyamin is brought with them.  Yehuda guarantees his return to Yaakov.  Yosef plants his goblet with Binyamin, punishes him with remaining a slave in Egypt.

1st Aliya (41:1-14) 2 years later (after the Butler’s return to serve Paro), Paro dreams.  7 healthy cows emerge from the water, devoured by 7 skinny ones who emerge after.  Paro is not satisfied by the dream interpretations of his wise men.  The Butler remembers Yosef, telling Paro of him.  Yosef is shaved, dressed and rushed to Paro.

Dreams aplenty.  Yaakov dreamt of the ladder and the angels.  Yosef had 2 dreams.  The Butler and Baker had dreams.  Now Paro has 2 dreams.

When Yosef is successful in interpreting both the Butler and Baker and Paro’s dreams, does he wonder about his dreams?  Does he think his dreams may still come true?  Or does he assume his don’t match the pattern; the others were 2 dreams, one night.  His were 2 dreams, 2 nights.  Or perhaps 2 nights is a sign that they will take a long time to occur.  Maybe even over 20 years.

2nd Aliya (41:15-38) Paro relates the dreams to Yosef.  Yosef tells Paro that the 7 years of plenty will be followed by 7 years of famine.  Now, Paro you shall appoint a wise person to hoard food during the plenty, to avoid the lands collapse during the famine.  Paro responds: could one like this be found who has G-d’s spirit in him?

Dream interpretation is a rich subject.  If the dream is of plenty and famine, I get healthy stalks being devoured by sickly ones.  But stalks don’t eat.  And what do cattle have to do with agriculture?  Why cows walking out of the Nile?  Ok, cows can eat each other, whereas stalks can’t.  But stalks are agriculture, cows aren’t.

The name Elokim appears 7 times in this exchange between Yosef and Paro.  When a word is repeated 7 times, it is a signal – take note, this is central.  The story of Yosef’s sale, his descent to Potiphar’s home, his being framed by Mrs. Potiphar, thrown in jail, is a downward spiral designed by the hands of man.  But all that is about to change, for G-d’s Hand is entering the story.

3rd Aliya (41:39-52) Paro appoints Yosef over all of Egypt; he receives the signet ring, the royal clothes, rides the royal chariot, receives the Egyptian name Tzafnat Paneach and marries.  He gathers the grain in the years of plenty.  His 2 sons are born; Menashe, G-d has allowed me to forget my father’s home and Ephraim, G-d has made me prosper in Egypt.

In an instant, Yosef has gone from the foreign lad in jail, to the number 2 man in the land.  But.  The wrong land.  Aren’t we supposed to be settling the land of Israel?  In our absorption in a wonderful story of twists and turns, we forgot that the story of the Torah is the promise to Avraham: Your children will inherit the land.  Of Israel.  Not Egypt.  The shift of the story of the Jewish people has moved entirely from Israel to Egypt right under our noses.

And don’t we all love the Midrash that the Jews were redeemed from Egypt for not changing their names, their clothing or language.  Yosef is given new clothes, and a new name in a new language.  Yosef seems to have become the quintessential Egyptian.

4th Aliya (41:53-42:18) The famine begins.  Paro instructs his people to go to Yosef, for Yosef has opened the storehouses.  Yaakov sends his sons, save Binyanim, to Egypt to get food.  When the brothers bow to Yosef, he recognizes them.  He remembers his dreams.  Yosef challenges the brothers, claiming they are spying Egypt.  To prove they are not, he demands they bring Binyamin.  And puts them in jail for 3 days.

What did Yosef think when he saw the brothers?  All the commentators grapple with Yosef’s response.  Why not say hello to them?  Why hide?  Varied are the responses.  But on the level of metaphor or drush – what an image.  The Jew, successful, wildly successful, in the highest offices of his new land, with his new language, his new name, his new clothes; is unrecognizable to his brothers.  And he himself, so comfortable in his new world, cannot find the words to bridge the gap.

5th Aliya (42:19-43:15) Yosef tells the brothers that one should stay behind while the rest return home and bring Binyamin to him.   They respond to themselves; this has occurred because of how we treated Yosef.  Yosef cries upon hearing this.  Shimon is jailed.  Yosef places their money with their grain.  When they discover this, they wonder why G-d is doing this.  Yaakov is distressed at the thought of Binyamin leaving him.  But when the food runs out, there is no choice.  Yehuda guarantees Binyamin’s safe return.  They return and stand before Yosef.

The brother’s feelings of guilt for the sale of Yosef are inescapable.  Over 20 years later, in Egypt, buying food – when things turn into a crisis, with Yosef demanding they bring Binyamin, the brothers immediately blurt out: we are getting our due for selling Yosef.  They have been waiting for calamity to befall them, knowing it will surely come.  But of course, they mean this is G-d meting out a form of punishment to them.  When really, it is Yosef who is manipulating them.  So, it isn’t G-d, it’s Yosef.  Or is it?  Maybe they are right.  Yosef is repeatedly described as successful in Egypt; in Potiphar’s home, in the jail, and now as number 2 in the Land.  He is efficient and definitive.  Yet, here, he is capricious; puts them all in jail, says they should all remain in jail and one return, then changes his mind, one stay in jail, all return.  Either Yosef is beside himself and winging it, not really knowing what to do.  Or maybe the brothers are not the only ones being manipulated.  Maybe Yosef too is a puppet in the Divine Hands – he makes a move, and He puts into his head something different.  In order to bring the Jews to Egypt.

6th Aliya (43:16-29) The brothers receive a royal welcome from Yosef upon their return with Binyamin.  They apologize for the money they found in their grain sacks.  Yosef tells them not to worry for their G-d has given them a gift.  The brothers are treated to a fine dinner.  Yosef inquires of their father and sees Binyamin.

Binyamin is Yosef’s brother, the only other born from Rachel.  Binyamin was very young when Yosef was sold.  This is 22 years later.  Yosef would not recognize Binyamin.  The aliya ends on a pregnant note – he sees Binyamin – and then what?  The next aliya begins with Yosef crying.  Yosef does a lot of crying in the story.  At the same time, for the brothers, they swing up and down.  Nervous as to how he will react.  Relieved at the banquet he serves them.  But then crashing down when in the next aliya the goblet is planted with Binyamin.

7th Aliya (43:30-44:17) Yosef sits the brothers in the order of their birth.  They are surprised.  Their sacks are packed with grain, their money returned.  And Yosef’s goblet planted in the sack of Binyamin.  No sooner had they left, Yosef orders the guards to pursue.  The goblet is found in the sack of Binyamin.   They return to Yosef.  Yehuda offers that they all stay as slaves.  Yosef demurs; the thief alone shall be a slave.  The rest of you return home in peace to your father.