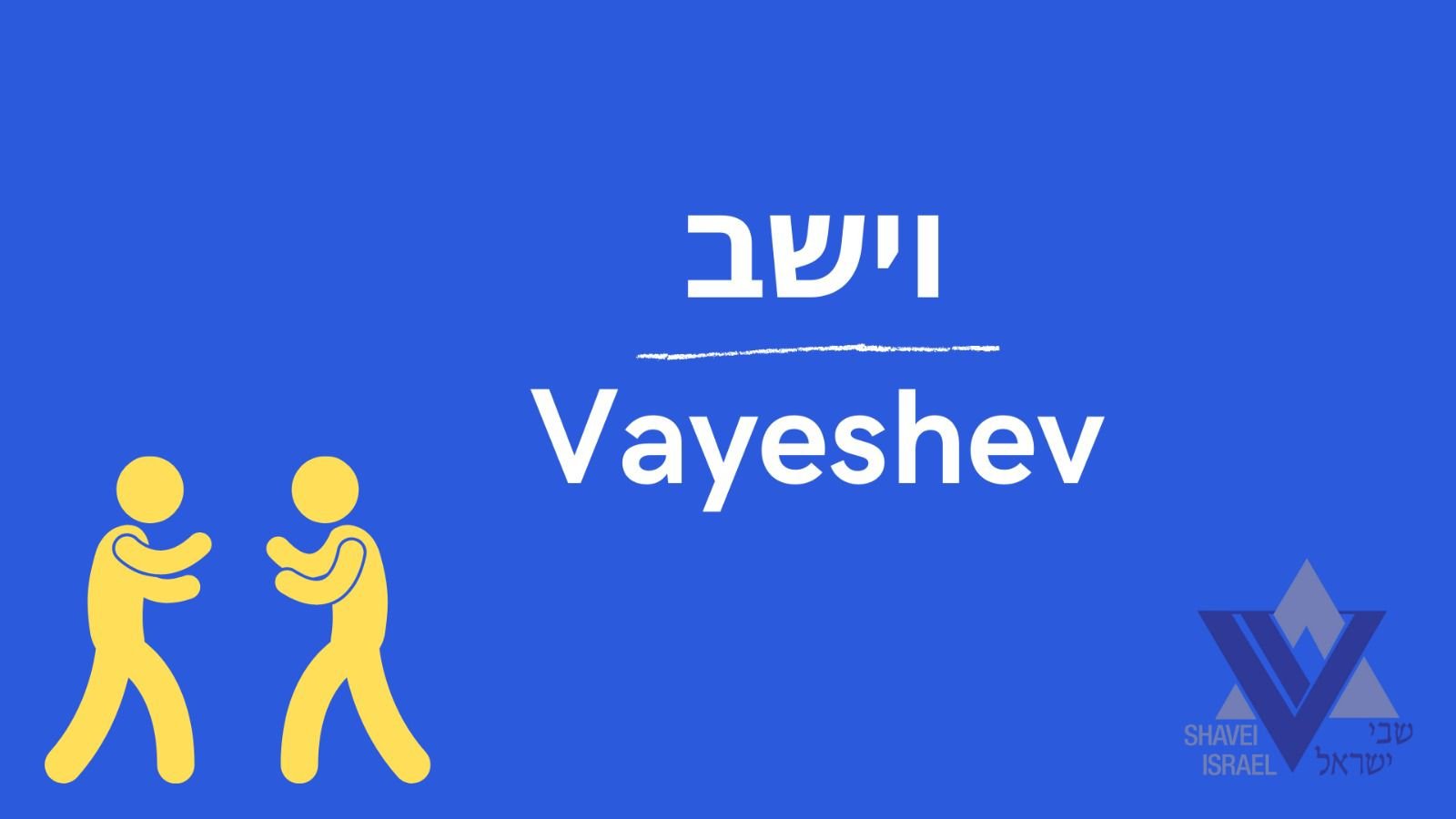 The sale of Yosef in Parshat Vayeshev is one of the most famous stories of the Torah.  Yaakov settles, finally, in the land of Israel.  Yosef is favored.  Yosef has 2 dreams.  Yaakov sends Yosef to inquire of his brother’s welfare.  The brothers sell Yosef to merchants traveling to Egypt.  Yehuda is confronted by Tamar and accepts responsibility.  Yosef achieves great success as a servant to Potiphar.  After being framed by Potiphar’s wife, Yosef ends up in jail.  His success continues in jail.  He interprets the dreams of the butler and baker but remains in jail.

The story of Yosef is the longest in the Torah, spanning 4 parshiot.  It’s panoply of human emotions and conditions are gripping: a favored child, dreams, jealousy, isolation, sexual struggle, success.  And later; tears, confrontation and brotherly responsibility.  It is the story that lays bare human foibles; hence its appeal and fame.

1st Aliya (37:1-12) Yaakov settles in the land of Israel.  Yosef is 17, brings reports to his father.  Yaakov loves Yosef.  He gives him a special coat, provoking the jealousy of his brothers.  Yosef has 2 dreams.  The brothers, gathering sheaves of wheat, gather around and bow to Yosef’s.  The sun, moon and 11 stars bow to him.  The brothers feel hatred.  Yaakov, while criticizing Yosef, takes note of the dreams.

The first verse, while eminently simple, introduces this entire story.  “Yaakov settled in the land of his father’s sojourning.”  As if to say: they were sojourners, but not me.  I am going to be a settler.  Avraham was promised the Land of Israel.  And that his children would be strangers in a strange land, returning wealthy to Israel.  Yaakov figures, “hey, that was me.  Long years with Lavan.  Returned wealthy.  Now on to the next stage of Jewish history: settling and ruling this land”.

The time to settle and eventually rule this land has arrived.  Building a state requires an economic change, from shepherding to farming.  And rule requires power.

When Yosef dreams not of sheep but of bundles of wheat, Yaakov’s ears perk up.  Why a dream of wheat when we are shepherds?  Is this a new world dawning?

And then a dream of power, of the sun, moon and stars.  Is this a Divine message, through dreams, that the promise of the land is about to happen, with agriculture and power facilitating the building of our nation?

2nd Aliya (37:13-22) Yaakov sends Yosef to inquire of the welfare of his brothers.  A man directs him to Dotan.  The brothers plot to kill Yosef and put an end to his dreams.  Reuven objects to spilling his blood, suggesting to merely throw him into a pit.  He saves Yosef, hoping to return him to his father.

The single best known aliya in the Torah (ok, because of Broadway – oh, such is our world).  Brothers wanting to kill their brother?  This is unprecedented.  Well, except for the first brothers in the Torah, Cain and Abel.  Rivalry, competition, jealousy is an inescapable part of life.  Brothers struggle (as the Midrash says re Cain and Abel) over inheritance money, religion, marriage or here, parental love and jealousy.  Had the Torah avoided this sibling rivalry, it would have lacked the reality of life.  But what is of much greater import is the response to rivalry.  The response of sibling loyalty, brotherhood and responsibility (and lack of it) is the story of the Torah.  Human failures will happen – how to respond is the concern of our Torah.

3rd Aliya (37:23-36) Yosef is stripped of his coat, thrown in an empty cistern.  Merchants appear.  Yehuda objects to killing their brother, convincing the others to sell Yosef to these merchants.  Yosef is sold to the merchants and brought to Egypt.  Reuven finds the cistern empty and rends his garments.  Yosef’s coat is dipped in blood, brought to Yaakov.  Yaakov rips his clothes and is inconsolable.  Yosef ends up in the home of Potiphar.

Yosef dreamed of the sun, moon and stars – as high as you can get – and ends in the pit, as low as you can get.  Yaakov, who dreamt of a ladder ascending to the heavens, now says he will “sink to the netherworld in mourning”.  Yaakov deceived Yitzchak with goatskin on his arms; Yaakov is deceived by Yosef’s coat dipped in goat’s blood.

4th Aliya (38:1-30) Yehuda descends.  He has 3 sons.  1 son marries Tamar and dies, as does the 2nd.  He delays the 3rd son from marrying her.  Tamar disguises herself.  She becomes pregnant from Yehuda.  Yehuda orders her to be put to death.  She sends his identifying possessions.  Yehuda admits.  She has twins, Peretz and Zerach.

Yehuda descends.  But ends up with Zerach – shine.  Yehuda withheld his 3rd son from Tamar, as he withheld Yosef from returning to Yaakov by selling Yosef.  But here he took full responsibility whereas there he didn’t.  When the brothers wanted to kill Yosef, Reuven told them to throw him in a pit.  Ok, don’t kill him with a knife; kill him passively, of starvation.  Yehuda stood up; let’s not kill him, let’s sell him.  That certainly was better than killing him.  But he really should have objected more vociferously and said: “I will not let you harm Yosef.  I will return him to Abba.”  Here he takes full responsibility.  This is a harbinger of the full acceptance of responsibility he will demonstrate later in guaranteeing Binyamin’s return to Yaakov.

A little wee aliya of 6 verses.  And G-d’s name appears 6 times.  G-d’s name did not appear in the 66 verses until here in the parsha (save for the death of the 2 sons of Yehuda: “they did bad in the eyes of G-d”).  This is very similar to the absence of G-d in the beginning of Sefer Shemot until He finally sees their affliction.

Man does just fine spiraling down all by himself – Yosef at the hands of his brothers, Yehuda with his mishandling of Tamar, the Jews in Egypt at the hands of Paro.  When he hits bottom, G-d appears.

6th Aliya (39:7-23) Potiphar’s wife propositions Yosef.  Yosef resists, for as much as he has complete authority in the home, this would be a sin to G-d.  With no one around, she grabs him.  He flees, leaving her holding his garment.  She frames Yosef as having approached her.  Yosef is thrown in jail.  G-d is kind to him and the jail keeper puts Yosef in charge.  All that he does, G-d makes successful.

From dreaming of the sun, moon and stars, and brothers bowing to him, Yosef has gone down to Egypt, down in status to a slave, and now down yet again to jail.

Yosef earns the title of Yosef HaTzaddik from his resistance to Mrs. Potiphar.  He is alone, in a foreign land, no one around, being propositioned; yet, his thoughts are sinning to G-d.

7th Aliya (40:1-23) The butler and baker of Paro are jailed.  Yosef takes care of them.  They dream.  Yosef asks: tell me the dreams for their explanations are to G-d.  The butler saw a fruitful vine, squeezing the grapes into the cup of Paro.  Yosef says: you will be restored as butler.  And, Yosef adds, remember me when things are good again and tell Paro, for I don’t deserve to be here.  The baker describes dreaming of bread on his head.  Yosef says: you will be hung.  The butler is restored.  The baker is hung.  The butler forgets Yosef.

And if Yosef is such a good interpreter of dreams – well, he himself had 2 dreams.  What does he make of his dreams?  He dreamt of the brother’s bundles of wheat bowing to him.  And of power, all bowing to him.  Does he mull over his dreams every once in a while?  Every week?  Every day?  He tells Paro that he having 2 dreams implies that they will happen soon.  He had 2 dreams.  His dreams didn’t happen soon.  Does he think they will still happen?  After all, how soon is soon?  A few days?  Or 25 years?