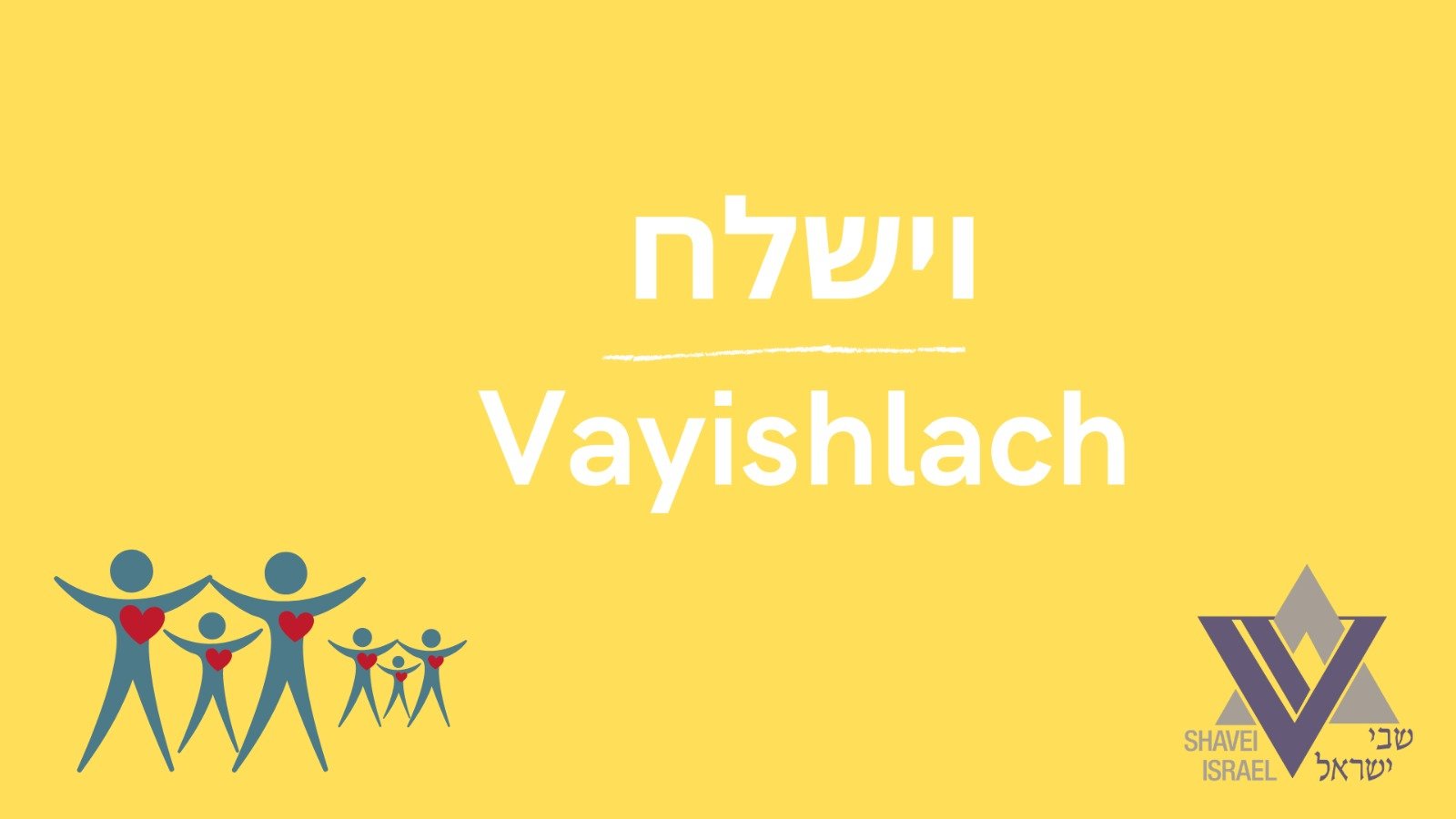 Yaakov’s challenges never seem to end.  He returns to the land of Israel.  He is fearful of a confrontation with Esav.   He prepares by dividing his entourage.  A man fights him through the night, changing his name to Israel from Yaakov at dawn.  Yaakov sends gifts to Esav to appease him.  Esav runs, hugs Yaakov, kisses him and cries.  Yaakov spurns Esav’s request that they settle together.  Dinah is raped by Shechem in Shechem.  Shimon and Levi kill the men of the city.  Yaakov arrives at Beit El, the place of his ladder dream and builds an altar.  Rachel dies giving birth to Binyamin.  Reuven lies with Bilha.  Yaakov is reunited with Yitzchak.  Esav’s lineage is outlined.

Yaakov’s life is one of travail. Esav wanted to kill him; he fled for his life.  The time with Lavan was full of hard work and deception.  He fights with an angel.  On his return home, he never reunites with his mother Rivka.  He avoids confrontation with Esav.  Dina is raped.  The city of Shechem is slaughtered.  His dear wife Rachel dies in childbirth.  And next week Yosef gets sold.  We well understand Chazal’s comment at the beginning of next week’s parsha that Yaakov just sought some peace and quiet.

1st Aliya (32:4-13) Yaakov sends messengers to Esav.  Tell Esav that his servant Yaakov has been with Lavan.  We have much flock.  Word comes back that Esav is approaching with 400 men.  Yaakov is afraid; splits his entourage, so at least half will survive.  And he prays:  While I am undeserving, You promised my progeny would be numerous.

Yaakov does not know what to expect from Esav.  Last we heard, Esav wanted to kill Yaakov.  Yaakov does not know if he still does.  Because, there is a crucial lacuna in our story.  Way back when Yaakov stole the blessing from Esav, Esav vowed to kill Yaakov.  Rivka warned Yaakov to flee.  But she also promised him that she would send word when the coast was clear, when Esav no longer sought to kill Yaakov (27:45).  Where’s his mother Rivka?  The one who loved him?  Yaakov never got word from her that it is safe to return.  Now, he did get assurance from G-d to return and that He would be with him.  But does that mean Esav still wants to kill him, but that G-d will be with him and protect him?  Or that Esav has given up his anger?

2nd Aliya (32:14-30) Yaakov prepares gifts of his livestock for Esav with the message: from your servant Yaakov.  A man fights Yaakov overnight, wounding his thigh.  At dawn the man tells him his name is Yisrael, for he fought G-d and man and prevailed.

Yaakov does not know if Esav harbors murderous intent.  If he does, Yaakov attempts to appease him with gifts.  Why does he think livestock gifts with a gift card attached, “from your servant Yaakov” will cool Esav’s murderous intent?

Esav wanted to kill Yaakov because Yaakov stole the bracha.  What was that bracha?  (27:28-29) “G-d will give you of the fat of the land, much grain and wine.  And you will rule: your brother will bow to you.”  A 3 part bracha: agricultural success, political power and dominance over your brother.  Yaakov is telling Esav not to get too worked up about the bracha.  Because it never came true.  I have no agricultural success, no power and no dominance over you.  All I have are animals.  No land.  Certainly no fat of the land.  And power?  I have been a migrant worker with Lavan.  And who is bowing to whom?  “From your servant Yaakov”.  3 strikes – no fat of the land, no power, and you are the master, not me.  So, no need to fuss over a bracha that was a blank.

3rd Aliya (32:31-33:5) Yaakov wakes with a limp, hence the prohibition of eating the sciatic nerve.  He sees Esav.  Divides his family.  Esav runs to him, hugs, kisses and cries.

Yaakov must have sighed a sigh of relief.  When he heard that Esav was coming with 400 men, he was convinced Esav still sought to kill him – otherwise, why the brigade?  And, I never got word from Mom that Esav doesn’t want to kill me.  And then Esav ran, hugged, kissed and cried.  What a relief.

What changed Esav’s mind?  Let’s leave Yaakov’s shoes.  And jump into Esav’s.  Rivka never sent word of Esav’s change of heart because he didn’t have one.  He has every intention to kill Yaakov.  Brings his army.  But now he has a change of heart.  Why?  Perhaps he was convinced by Yaakov that the bracha was a dud and so nothing to get worked up about.  But the Torah seems silent on this crucial flip.  Why doesn’t it tell us why Esav changed his mind, gave up his intent to kill Yaakov and hugs him instead?

Rav Elchanan Samet has a fascinating suggestion.  The Torah is not silent on the change of heart.  It tells us exactly.  A man fought with Yaakov all night.  In the morn, he blesses Yaakov.  For Yaakov has prevailed.

Rav Samet suggests that when the Midrash says this man is “saro shel Esav”, Esav’s heavenly angelic counterpart, it is explaining the simple flow of the story.  It is this story that explains Esav’s change of heart.

Esav the man is guided by Esav the angel, his heavenly counterpart.  There are 2 parallel worlds: this world and its heavenly partner.  Esav the man doesn’t know why he changes his mind.  His mind was changed by his guardian angel.  Esav the angel has tried to fight Yaakov all night unsuccessfully.  The fight with Yaakov is over.  Esav’s heavenly “sar”, his angel, admits defeat.  The “sar” blesses Yaakov.  And hence, Esav the man’s fight is over too.  Esav’s guardian angel changed from murderous intent to blessing – so too Esav the man changes in parallel from murderous intent to reconciliation.  The Midrash seems to be the pshat.  (My friend Rabbi Shmuel Goldin pointed out this is foreshadowed at the end of last week’s parsha by Yaakov’s sojourn in “machanaim”, literally “double camp” where he encounters angels.  There are parallel worlds, the physical and the angelic.)

4th Aliya (33:6-20) Esav is urged to accept Yaakov’s gifts.  Esav offers that they live in brotherhood.  Yaakov demurs, sending Esav ahead, hinting he will catch up.  He turns instead toward the land of Israel.  He dwells in Sukkot and then in Shechem.  He builds an altar and calls in the name of G-d.

While Yaakov may have tried to convince Esav that the bracha of Yitzchak did not come to be, he does not believe it himself.  He goes to Shechem and builds an altar.  Why doesn’t he go immediately to Beit El?  Didn’t he make a vow when he had the dream with the ladder that he would return to that spot?  And why didn’t he immediately reunite with his mother and father?  Why go to Shechem and not Beit El or Chevron?  He is following in Avraham’s footsteps – literally.  Avraham journeyed from Charan; first stop in the land of Israel was Shechem, where he built an altar.  Yaakov has just journeyed from Charan to the land of Israel, stopping first at Charan and building an altar.

5th Aliya (34:1-35:11) Dina is raped by Shechem in Shechem.  The brothers claim they will only ally with people who are circumcised.  While the men are recovering Shimon and Levi kill them all.  Yaakov is upset.  But they counter; “can they make our sister a harlot?”  G-d tells Yaakov to go to Beit El and make the promised altar.  He does.  G-d appears to him and tells him his name is Yisrael not Yaakov.  And that nations and Kings will come from him.

The story of the rape of Dina is the first story of the next generation.  And the brothers rhetorical comment will be a clarion for the rest of the book – not what they said but what they implied.  “Can they make our sister a harlot?” meaning, and we, her brothers stand idly by?  No.  We stand up for our siblings.  Thus begins the rest of the book – brothers standing up for brothers.  Or not.

The pivot to the story of Yaakov’s children is occurring.  But it will proceed without Rachel, Yaakov’s dear wife.  Women have played a dominant role until here.  Rachel’s death deprives Yaakov of the wise feminine voice that Avraham had with Sarah and Yitzchak had with Rivka.  Would Yosef have had that special coat, had Yaakov had Rachel’s counsel?