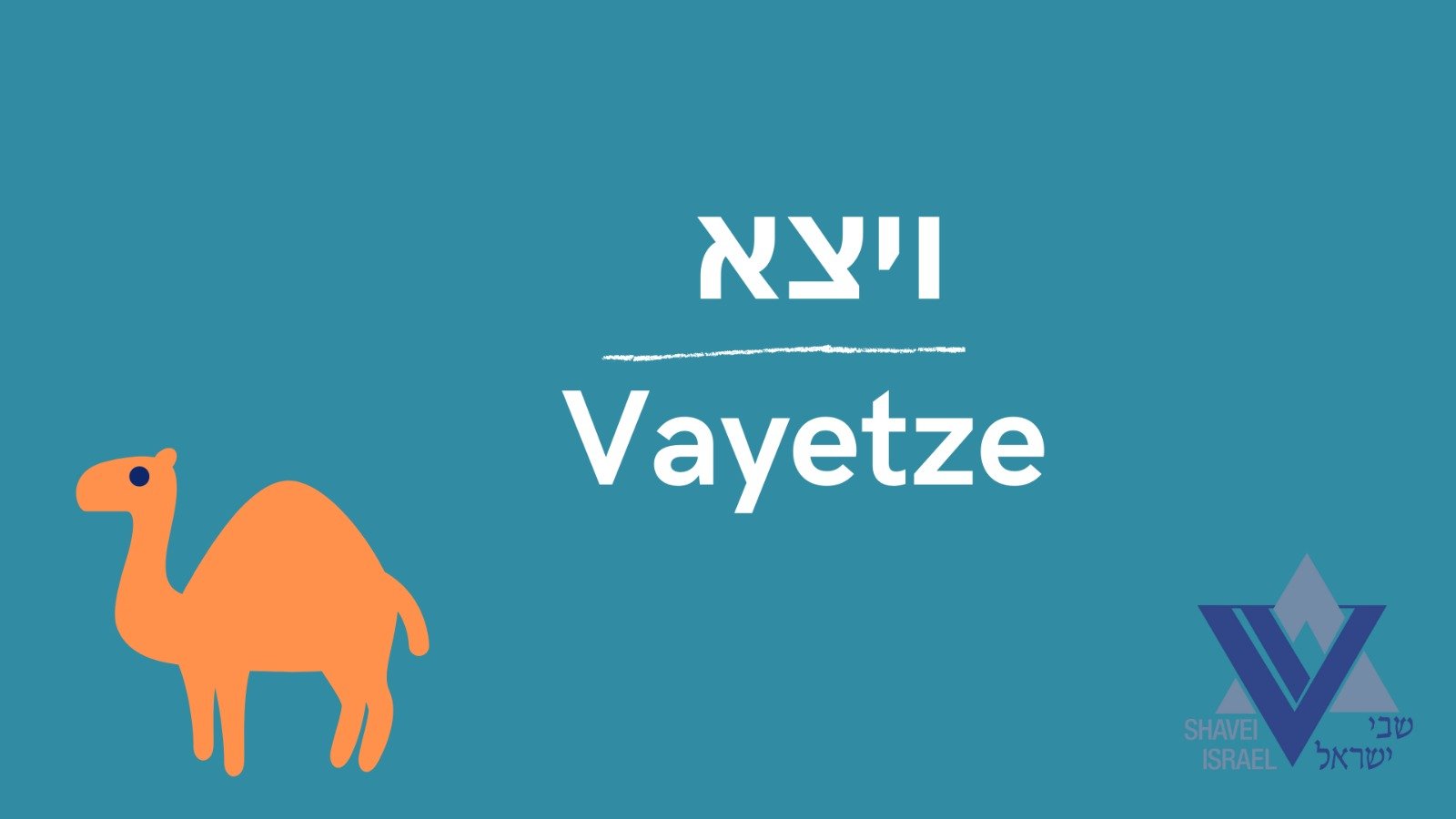 Our Parsha begins with Yaakov fleeing the land of Israel from Esav’s murderous intent and it concludes with his return to the land of Israel. He dreams as he leaves of a ladder reaching to Heaven with G-d promising that He will bring Yaakov back in peace. Yaakov meets Rachel at the well in Charan, marries Leah and Rachel, 11 of the 12 sons and Dina are born. Lavan and Yaakov bicker. Yaakov earns his wages through animal husbandry. Angels greet Yaakov on his return to Israel.

1st Aliya (28:10-22) Yaakov flees the land of Israel. He dreams: a ladder with angels, G-d at the top. G-d reiterates to Yaakov the promise of the land of Israel and of numerous descendants. And that He will protect Yaakov and bring him back to the Land. Yaakov makes a monument at that spot and declares that upon his safe return he will come back and make this spot a house of G-d.

One of the great dreams of the Torah. In fact, the first dream of an upcoming series of dreams in the Torah: Yosef’s dream, Paro’s dream. In this dream Yaakov is assured of Divine protection. But why did he need this assurance? What was on his mind?

Let’s place ourselves in Yaakov’s sandals. He does not know the end of the story. We do but he doesn’t. He is filled with uncertainty. Avraham had 2 children: Yishmael and Yitzchak. One, Yitzchak continued Avraham’s legacy as a Jew. The other, Yishmael was out. Then Yitzchak had 2 children, me and my brother Esav. Maybe we too will repeat this same pattern: one will be in and one will be out. Who is the one – am I in or am I out? I stole the blessing intended for Esav my brother. Perhaps my fleeing Israel now is a Divine sign that I am out and Esav is in. After all, my father Yitzchak never left the land. So am I being expelled from the land, expelled from the promise of the land? G-d reassures him – I will give you the Land and bring you back. But. In a dream. Are dreams real or wishful thinking?

2nd Aliya (29:1-17) Yaakov arrives in Charan. He converses with shepherds at the well. They are waiting for a crowd of them to remove the stone over the well. He inquires of Lavan; that is Rachel, daughter of Lavan, coming now. Yaakov removes the heavy stone of the well, gives Rachel water. He tells her he is Rivka’s son. Rachel runs to tell her father, Lavan runs to greet Yaakov. Yaakov stays with them for a month.

If Yaakov is looking for a sign that G-d is with him, he got it. There are so many parallels to Eliezer finding Rivka at the well. Except in reverse. Rivka drew the water for Eliezer and his camels; Yaakov removes the stone and gets water for Rachel and her animals. Eliezer asked Rivka who she was; Yaakov tells Rachel who he is. Rivka ran home to her mother; Rachel runs home to her father. Lavan ran out to greet Eliezer; and Lavan runs out to greet Yaakov. Eliezer was seeking a wife for Yitzchak and returning to Israel; Yaakov is seeking family but not leaving.

3rd Aliya (29:18-30:13) Yaakov loves Rachel. In response to Lavan asking how he can compensate Yaakov, Yaakov offers to work 7 years to marry Rachel. At the end of that time, Lavan makes a celebration. He gives Leah to Yaakov. In the morning Yaakov realizes. Lavan remarks that here we don’t switch younger and older. Yaakov marries Rachel and works another 7 years. Leah has 4 children: Reuven, Shimon, Levi, Yehuda. Rachel is upset, as she is barren. She gives Yaakov Bilhah, her maidservant. She has Dan and Naphtali. Zilpah, Leah’s maidservant has Gad and Asher.

Let’s get back in Yaakov’s sandals. He still wonders if he is part of the Jewish people or has been spurned – was that dream of Divine protection prophetic or mere wishful? He is tricked at night when it is hard to see and marries Leah. Is this a sign from G-d of displeasure at Yaakov tricking his father who could not see to get the bracha? Maybe I am out. On the other hand, my dear wife Rachel seems to follow in my grandmother Sarah’s footsteps; she is barren and gives her servant to me to have a child, just like Sarah was barren and gave Hagar to Avraham to have a child.

11 of the sons of Yaakov and his daughter Dina have been born. There is but one son from his dear wife Rachel. If we get back in Yaakov’s shoes, he does not know if he is to be in the Jewish people or not. Because another thing may sit uncomfortably with him. Avraham was the first generation of the Jewish people. While he was in, his brother Nachor was out. Back at the end of Yayera (22:20-14), we learn that Nachor had 8 sons with his wife Milka and 4 with his concubine Reuma. 12 sons. And at the end of Chayei Sarah (25:12-15), we learn of the children of Yishmael, the one who is out of the Jewish people. 12 sons. Hmm, the ones who are out of the Jewish people, Nachor, Avraham’s brother, and Yishmael, Yitzchak’s brother, had 12 sons. I have 11. On the other hand, all my children are walking in the footsteps of Avraham, leaving their land of Charan and journeying to Israel. Which sign is it? Am I in or out?

5th Aliya (30:28-31:16) Lavan asks Yaakov what his wage is for all the work he has done. Yaakov asks that he be allowed to select and breed certain animals as his wage. He is wildly successful and becomes laden with livestock. Lavan’s sons become jealous. Yaakov knows it is time to leave. He carefully explains to Rachel and Leah that he is worried as Lavan has not been honest with him. And that the angel has told him it is time to return to the land. They agree that whatever G-d says they must do.

Yaakov creates enormous wealth. Perhaps this is a Divine sign: Avraham had great wealth, Yitzchak was blessed with “meah shearim”, a 100 fold bounty of agriculture. Perhaps this is a Divine sign that I walk in my forefather’s footsteps.
6th Aliya (31:17-42) Yaakov and the family leave without telling Lavan. Rachel steals Lavan’s idols. Lavan pursues. G-d tells him not to harm Yaakov. Lavan berates Yaakov for his deception, not allowing him to kiss his children. Were it not that G-d instructed him otherwise, he would be justified in harming Yaakov. He searches for his idols but does not find them. Yaakov is fed up. He berates Lavan for his lack of appreciation of all of Yaakov’s hard work, changing his wages 10 times. But G-d saw my oppressive work and rewarded me.

One last look from Yaakov’s shoes. He still is unsure whether he is part of the covenant or not. But another prediction rings in his ears. Years earlier Avraham was told his children would be in a foreign land and afflicted, the Hebrew word “eenu”. For 400 years. And would return with great wealth. Yaakov uses that very word to describe his hard work for Lavan “G-d saw my hard labour – an’ee”. Perhaps, Yaakov wonders, I am that Jewish people. Foreign land. Afflicted. I am here 20 years, a long time – seems like 400. Leaving with great wealth.

On the one hand, on the other hand – Yaakov’s sees signs in his life that point to his being the next link in the Jewish people. And he sees signs that perhaps he is the one that is out and Esav in. But the scale is clearly weighing in his favour.

7th Aliya (31:43-32:3) Lavan and Yaakov part amidst a parting ceremony. A marker and stones are placed as testimony that Lavan will not approach Yaakov, nor Yaakov approach Lavan. Lavan returns home. Angels encounter Yaakov as he returns to the land.

The break with Lavan is complete. Pacts come in different shapes and sizes. If you get in trouble, I will come to help. Or, we will open our borders to commerce. Or. A wall. A cold peace. You, on your side. I on mine. Kind of like the mitzvah to never return to Egypt. Years of deception, of toil, of suspicion. That chapter is closed.