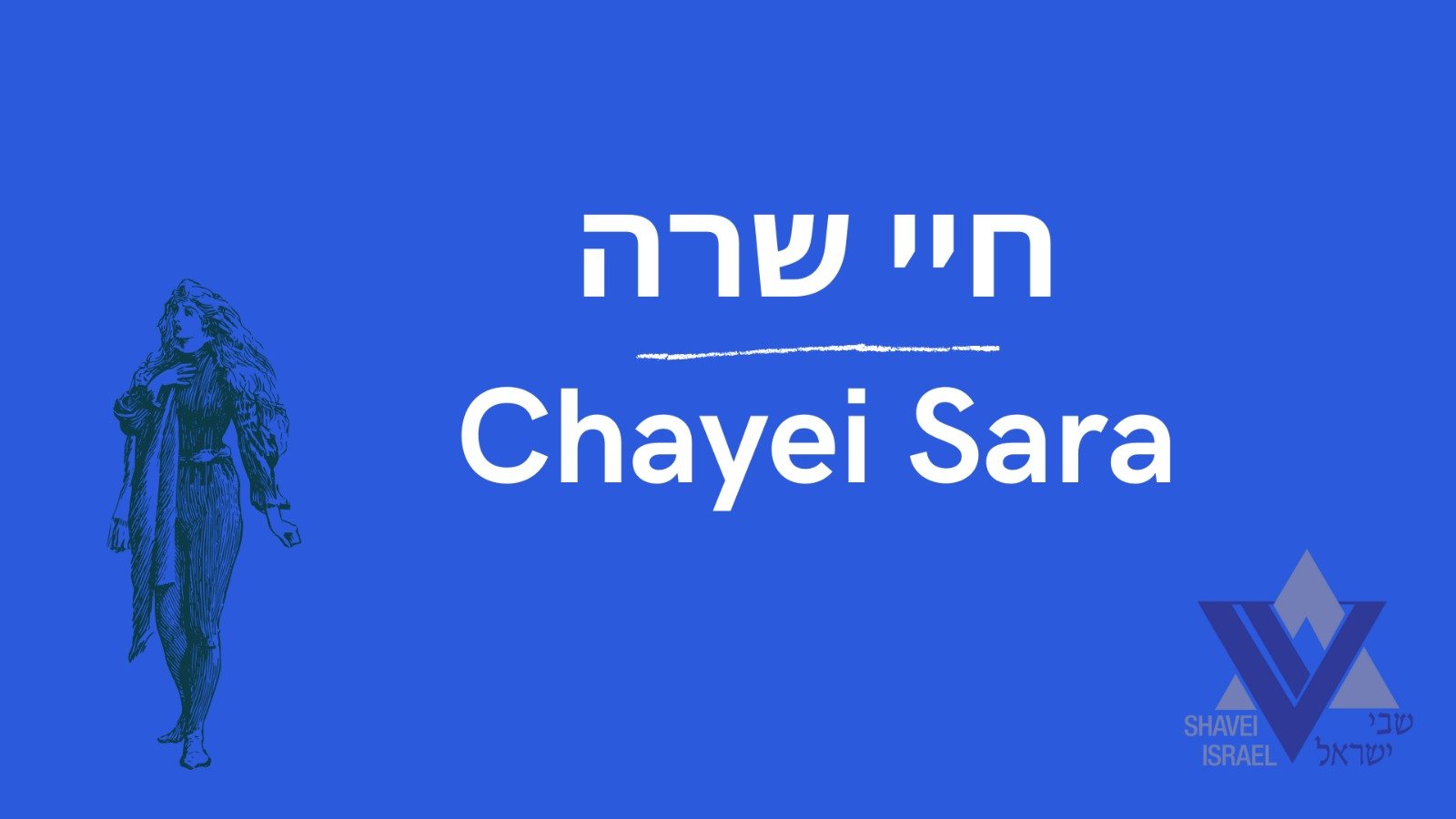 Our Parsha is the transition from Avraham and Sarah to Yitzchak and Rivka; Sarah dies at the beginning of the parsha, Avraham toward the end.  Avraham buys Maarat Hamachpela where Sarah is buried.  Avraham directs his servant to travel to Avraham’s land to bring a wife for Yitzchak.  Upon arrival, the servant asks G-d to show him the right one, the one who will give drink to he and his animals.  Rivka appears, does what he had hoped.  He tells the story to her family.  They agree that she is the one.  Yitzchak greets them on their arrival and marries Rivka.  Avraham’s other children are listed.  Avraham dies.  Yishmael’s descendants are listed.

1st Aliya (23:1-16).  Sarah dies at age 127 in Kiryat Arba, Chevron.  Avraham needs to buy a burial plot.  He is treated with nobility and respect.  The people want to give him a plot, while he insists on purchasing it.  He is successful in buying Maarat Hamachpela.

Avraham has clearly earned the respect and admiration of the people.  He in turn treats them with great respect, bowing twice.  The promises made to Avraham, of fame, of fortune and of family, have all been fulfilled.  Yitzchak has been born; Avraham is a man of great prominence, the people call him a prince of G-d; and he is wealthy.  But.  The promise that he would have the land of Israel?  He does not even own a burial plot.  Fame, fortune and family, yes; foothold in the land, no.

2nd Aliya (23:17-24:9) Sarah is buried.  Avraham requests from his chief of staff to swear to not have Yitzchak marry a Canaanite.  Rather, “go to my land, my birthplace” to find a wife for Yitzchak.  Do not take Yitzchak there.  If she refuses to come, you have done all you can.

Yes, Avraham addresses his chief of staff.  While we commonly refer to him as Eliezer, his name does not appear in this story.  He is not the only anonymous person to profoundly influence the story of the Jewish people.  He takes his place alongside the man Joseph will encounter on his way to see his brothers, who steers Joseph in their direction.  Both nameless.  As if to say: is he finding a wife, or is He finding the wife for Yitzchak?  Many messengers does He use.

And why is Avraham so insistent on sending his servant to “my land, my birthplace”?  You cannot help but hear an echo from Lech Lecha – “from your land, from your birthplace” – said to Avraham.  It could be that Avraham is seeking a woman to lead the new generation of the Jewish people who will walk in his footsteps.  Literally.  He is seeking a woman who will walk in the footsteps of Sarah.  Sarah, not just Avraham, left her land, her birthplace, her family home, journeying to the land of Israel.  This new generation will be led by a woman who too leaves her land, her birthplace and her parent’s home.

Following in the footsteps will animate Yitzchak and Rivka’s life.  Yitzchak will do many of the things that Avraham did – digging the wells, going to Gerar.  Rivka will walk in the footsteps of Sarah; Sarah sent Yishmael away, Rivka will in effect cause Esau to be sent away from the Jewish people.

3rd Aliya (24:10-26) The servant arrives in Nachor’s city.  He asks G-d for a sign; the woman who gives me and my camels to drink, she is the one.  Rivka appears and does just that.  She tells him she is from the family of Nachor.  And there is food for the camels and room for him to stay.  The man bows to G-d.

Rivka is not only going to walk in Sarah’s footsteps, leaving her home to go to the Land of Israel.  She also follows in the footsteps of kindness.  In the story of Avraham and Sarah’s generosity to the 3 men at the beginning of Vayera, there are 2 “ratz – run” and 2 “maher – fast”.  Rivka has 2 maher’s and 1 ratz here and then another when she runs home.  And – Avraham offered his guests “a little water”.  Here too the servant asks for “a little water”.  Not sure that drawing water for 10 camels would be called a little – but nary a peep of objection from Rivka.

4th Aliya (24:27-52) Rivka runs to tell her mother.  Her brother Lavan greets the man, welcomes him in.  But before he eats, the man insists on relating what just happened.  He relates that he is Avraham’s servant.  And that Avraham has been blessed.  And the promise to bring a wife for Yitzchak from his family.  And of his deal with G-d.  And that if the woman did as he had said, he would see it as a sign.  And his bowing to G-d.  He finishes by asking them if Rivka shall join him.  They respond yes; he bows to G-d.

Happy endings are fun to read once.  Or twice.  The commentaries address the detail with which the Torah repeats the story, this time told by the servant.  They mine the story for lessons.

But one lesson that jumps out is the G-d talk.  There is a lot of G-d talk by this servant.  But not just the servant; Lavan and Betuel respond “this has come from G-d”, “she will go as G-d spoke”.  Talk of G-d does not seem foreign to them.  Perhaps this is the lingering effect of Avraham’s influence; even after all these years of being away from his family, the influence of his belief in G-d still persists.  And the servant, the chief of staff’s language is deeply religious language – he certainly has been profoundly influenced by Avraham’s calling in the name of G-d.

5th Aliya (24:53-67) The servant is ready to leave.  When Rivka’s mother and brother ask for a little more time, the servant presses them.  They ask Rivka her wish; she will go.  They bless her.  Upon their arrival in the Negev, Yitzchak is coming from Beer L’chai Roi.  He sees the camels; she sees him.  Yitzchak is told of all that occurred.  Yitzchak and Rivka marry.

With the mission to find a wife for Yitzchak successful, someone is missing from this return: Avraham.  They travel right to Yitzchak.  Rivka and he marry.  And Avraham is not heard from again.  A true passing of the baton.

Why is it necessary to tell us Yitzchak was in Beer L’chai Roi?  In fact, he returns there and resides there after Avraham’s death.  Why?  That is the place where Yishmael was saved from near death after being banished by Sarah.  Perhaps Yitzchak regrets Yishmael’s banishment and seeks to make peace with his brother.  We will see that he does the same later with his own sons; he seems to want both Yaakov and Esav to continue his legacy.  The men seem to want reconciliation; the women see the need to be definitive.  Sarah banishes Yishmael.  Rivka banishes Esav.  Yet, Avraham is reluctant to send Yishmael away and Yitzchak seeks reconciliation with Yishmael and seeks to bless Esav.

6th Aliya (25:1-11)  Avraham marries Keturah; they have 6 sons.  All that Avraham has goes to Yitzchak; these are sent eastward with gifts.  Avraham dies at age 175; he is buried by Yitzchak and Yishmael in Maarat Hamachpelah.  Yitzchak is blessed by G-d: he lives in Beer L’chai Roi.

The transition from Avraham to Yitzchak is complete.  While G-d has been a silent partner in this parsha, here He completes the generational transfer – He blesses Yitzchak.  The Jewish people will be Yitzchak and not Yishmael.

7th Aliya (25:12-18) The generations of Yishmael are enumerated.  Yishmael dies.  His descendants dwell from Egypt to Assyria.

Yishmael’s story is brief.  He has numerous and powerful offspring.  The brevity is to emphasize that the Torah is not as interested in the history of power as in the history of the covenant of G-d with the Jewish people.  And that will be told at great length.