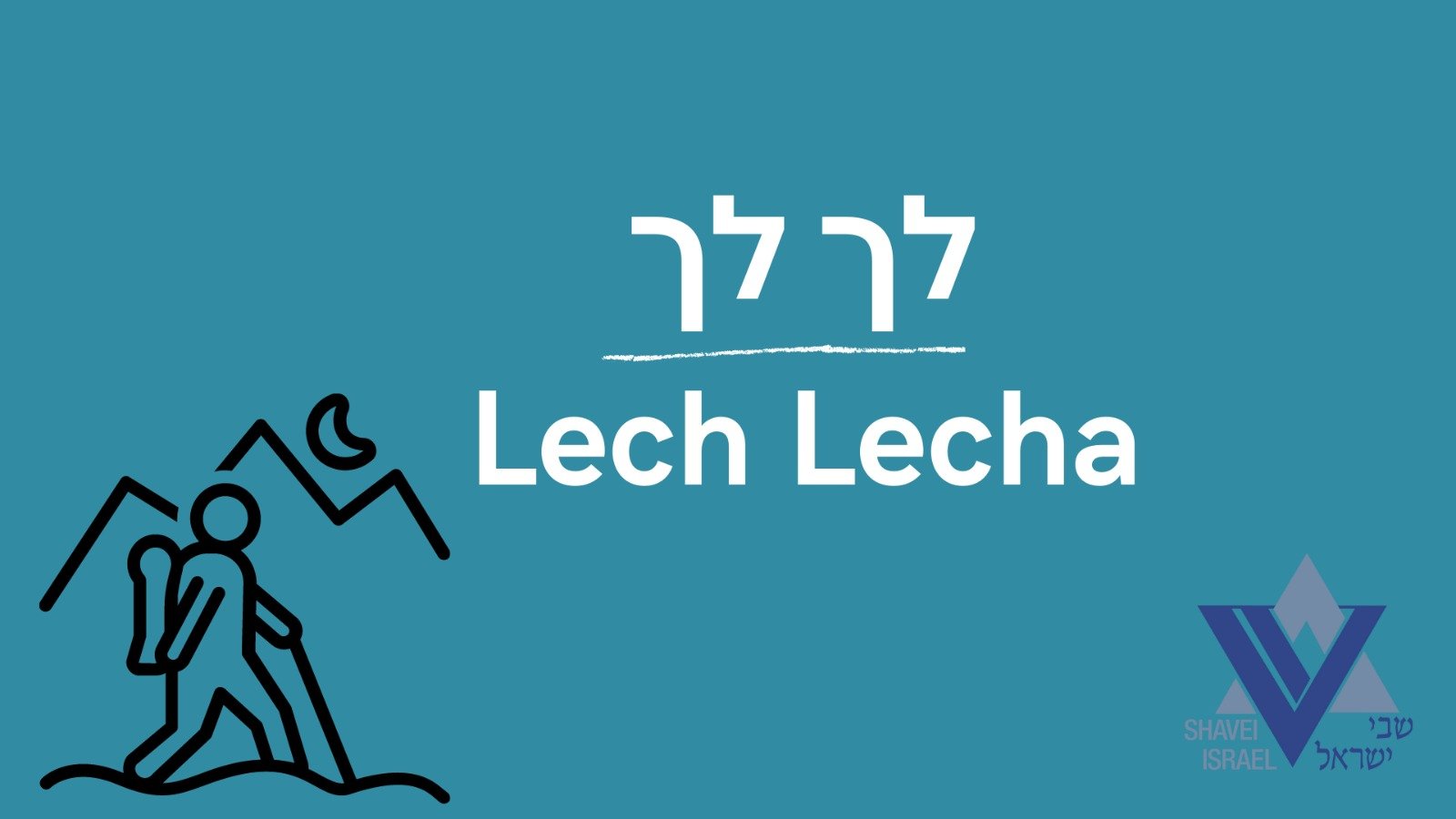 The Parsha introduces the Jewish people.  Avraham journeys to the Land of Israel, is promised the land, spends time in Egypt due to a famine, separates from Lot due to their great wealth, and rescues Lot when he is taken captive in war.  Avraham is promised the Land, though told his descendants will spend 400 years in Egypt.  Sarah has no child, Hagar bears Yishmael, Avraham is promised that Sarah will bear a child.  He is given the mitzvah of mila, circumcision, as a sign of the covenant.

1st  Aliya (12:1-13).  Avram (while we refer to him as Avraham his name begins as Avram and is only changed later) is told to journey to the land he will be shown.  There he will achieve family, fortune and fame.  The family journeys with Shechem as their first stop.  G-d appears to Avraham and promises him the land.  He builds an altar.  A famine forces the family to seek relief in Egypt.

Avraham is the first to be told to journey to a place, not away from a place.  Adam and Eve were sent out of the Garden, Cain sent away to wander the earth, Tower of Babel the people dispersed.  Avraham reverses this trend:  he is not sent away from G-d but pulled near to Him.

The story of the Torah is the story of promises.  Avraham is given 3 personal promises and one national one.  He is told he will have family, have fortune and have fame.  And his people will inherit the land.  G-d makes promises to man.  Unsolicited, perhaps undeserved.  Though we come to know Avraham as a great man, the Torah is mum on any background to receiving these promises.  For it is a story of G-d’s desire for a people – it is His reach to us.

2nd Aliya (12:14-13:4).  The family goes to Egypt fleeing famine.  Paro sees Sarah and she is taken to his palace.  Avraham is lavished with wealth because of her.  Paro sends them away.  The family returns to where they began, laden with wealth, to call in the name of G-d.

Avraham’s 3 promises, family, fortune and fame, will be fulfilled one by one.  First fortune.  Promise fulfilled – Avraham returns to the land from Egypt laden with wealth.  The Ramban points out the foreshadowing of the Exodus from Egypt – just as here Avraham journeys to Egypt because of famine, Paro suffers a plague, Jews leave with great wealth, so too this story repeats with the entire Jewish nation in th exodus from Egypt.

What does it mean that Avraham called in the name of G-d?  Ibn Ezra says either he prayed.  Or he called to people to embrace G-d.  Avraham engages the people of the land in knowledge of one G-d.

3rd Aliya (13:5-18).  The herds of Avraham and Lot are so numerous that their shepherds quarrel.  They need to separate.  Avraham allows Lot to choose – you go left, I right.  You go right, I left.  Lot chooses the lush area he sees around Sodom and Gemora.  Avraham is told by G-d to look over the land for he will have it all forever.  And his children will be as numerous as the sand of the earth.  He moves to Hevron and builds an altar.

The promise of fortune has been granted.  But his only family, Lot, moves away.  This is followed by a reiteration that Avraham’s children will inherit the land – except, he has no children.  He only has Lot.  And Lot’s judgement is suspect.

Eyes have been a bit of a problem in the Torah so far.  Eve looked at the fruit and it was beautiful.  Before the flood, the men looked at the women and chose wives.  Lot looks at the Jordan Valley and it looks like the lushness of Egypt.  Looks deceive; for while beautiful, each of these failed to consider more than the looks.  Looking will be replaced for the Jew by hearing, Shema, listening to the Divine Command.  Seeing beauty will be usurped by hearing the Command.

4th Aliya (14:1-20).  Four Kings make war with 5 Kings.  Lot is taken captive.  Avraham rescues him, returning all the spoils and captives.  The King of Sodom comes out to greet him, as does Malchizedek the King and Priest of Shalem.  Malchizedek blesses Avraham to G-d and blesses G-d for protecting Avraham.

The promise of fame has been achieved.  After the heroic rescue of Lot, Avraham finds the company of Kings.  2 of the 3 promises he received, those of fame and of fortune have been achieved.  The remaining 2 – of children and of inheriting this land are tougher.  Lest we think that G-d promised a deserted land to Avraham, this pitched battle of 9 kings belies that.  Not only has Avraham been promised that his children will inherit the land while he has no children, he has been told he will inherit a hotly contested land.

G-d promises to be Avraham’s shield, his “magen”; Malchizedek used the same expression, that G-d was Avraham’s “magen”.  Hence the description we use in tefilla of Magen Avraham.

As a conversation starter, G-d says to Avraham, “do not fear”.  Who said Avraham is afraid?  What is he afraid of?  Rashi comments that Avraham is worried that he has been showered with so much from G-d already that perhaps he does not deserve to have the remaining promises granted.  The remaining 2 promises are big ones; children and the land of Israel.  Perhaps I no longer deserve those.  Some promises are conditional – you deserve it, you will get it.  Perhaps he has used up all his merit and deserves no more.  G-d tells him to not fear for his merit is great.

6th Aliya (15:7-17:6).  After promising Avraham that he will have children, G-d again promises to him that He will give him the land of Israel.  Avraham queries as to how he will know this for certain.  In a dramatic ceremony of cut birds and a deep sleep, Avraham is told his children will be strangers and afflicted in a foreign land for 400 years.  Avraham will die in peace.  G-d makes a covenant to give the land to Avraham’s offspring.  Sarah has no child.  She gives Hagar to Avraham and Hagar becomes pregnant.  Sarah sends Hagar away.  An angel tells her that her offspring will be many.  Her child will be cantankerous but powerful.  Avraham is 86 when Yishmael is born.  At age 99 Avraham is told to walk before G-d.  His name is changed to Avraham.

Avraham was given 3 personal promises and one national one.  He was promised fame and fortune, which he received.  He is assured he will have children, which he believes.  But those are promises to him.  He wonders now about the promise that his descendants will inherit the land of Israel – what if they don’t deserve it?  G-d puts him to sleep, a tardema – the same word used when Adam went to sleep and Eve was formed – a deep, historic, epic sleep.  And G-d tells him that these promises will be kept.

The Torah continues the startling story of G-d’s unconditional promises to man.  Still no demands have been made of Avraham.  But the Torah also teaches us a lesson about promises: patience.  The promise that the Jewish people will have the land of Israel is going to take 400 years to happen.  Avraham will not see that one fulfilled.  Nor, in fact, will Moshe.  The Torah will end with that one not yet fulfilled.  Man lives patiently with promises yet to be fulfilled.

7th Aliya (17:7-27).  Avraham is told to circumcise his family as a sign of the covenant between he and G-d.  He is startled at the promise that Sarah will have a child at age 90, he 99.  He suggests that Yishmael could be the next generation of the Jewish people.  No, while Yishmael will be great, Yitzchak will be the next generation.

Avraham is reluctant to give up on Yishmael as the heir to the Jewish people.  Perhaps this is Avraham’s persistent kindness – he sees good, even greatness in Yishmael.  But that type of greatness is not sufficient: greatness comes in different shapes and sizes.  Yishmael is great in his way: Yitzchak will be great in a different way.  There is greatness amongst the nations of the world: but Jewish greatness is different.