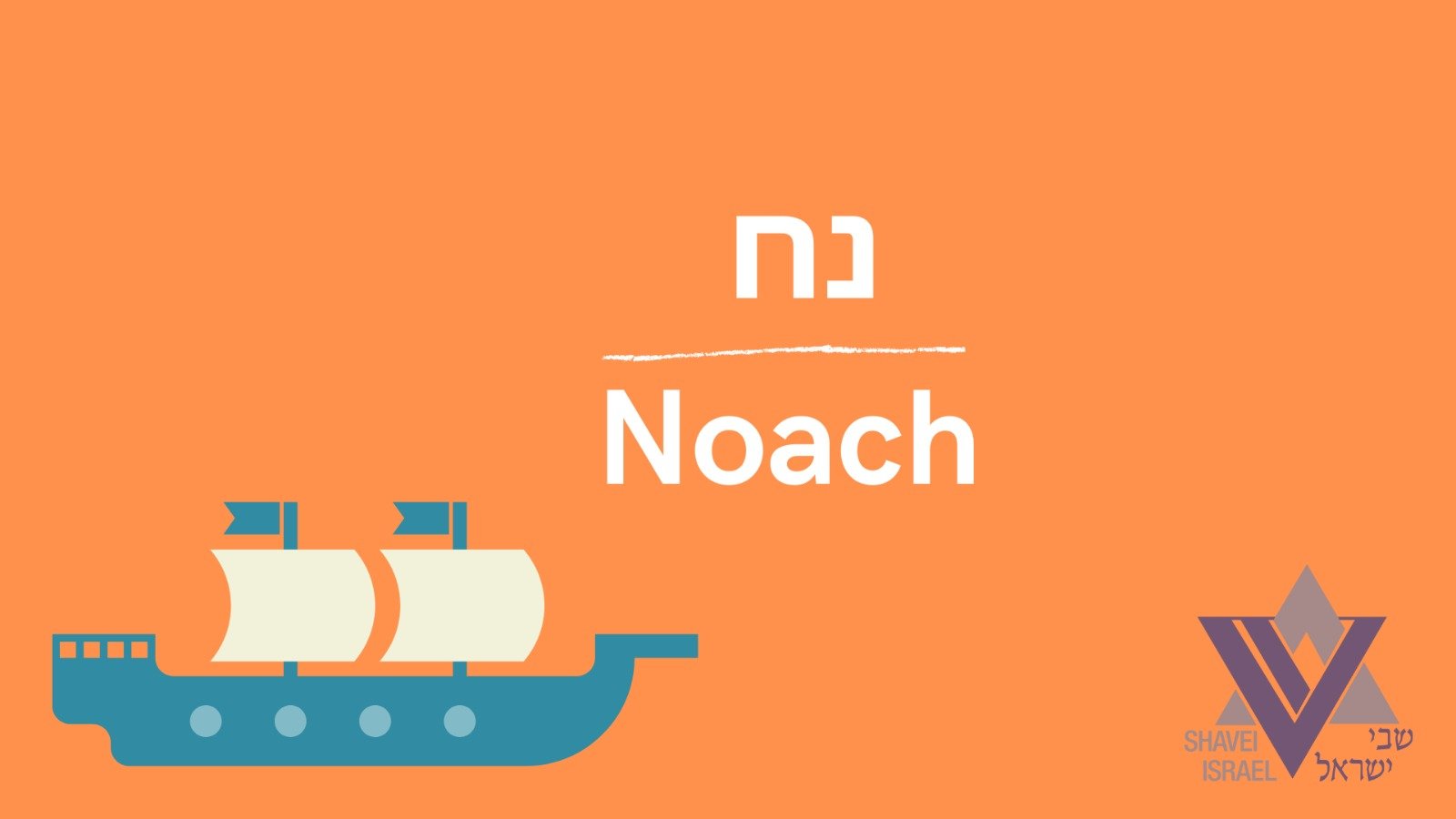 Parshat Noach describes: the destruction of the world through the Flood, Noah and his family, the story of the Tower of Babel and the introduction of Avraham’s family.

The first 2 parshiot in our Torah, Breishit and Noach, are essentially parallel creation stories, or more accurately a creation and a recreation.  However, the lessons to be learnt are not in the parallels but in the differences.  What is different in this recreation?  What does G-d communicate to Noah that He did not communicate to Adam?

1st aliya (6:9-22).  Noah is righteous, while the world is filled with evil.  Noah is instructed to build an Ark, for while G-d is to destroy all living beings, He establishes a covenant with Noah to save him.  Noah, his family, 2 of each animal and the food are to be brought into the Ark.  The aliya ends with “Noah did all that G-d commanded”.

The world will be destroyed with water.  The Torah describes in the second verse in the Torah, that the first thing to exist in the world was water: “The spirit of G-d hovered over the waters”.  If you want to indicate that the world is getting a reboot, is starting again, cover it with water, as it was “In the Beginning”.

2nd aliya (7:1-16).  Noah is again described as righteous.  Bring 7 of each pure animal, 2 of the impure, and all the birds into the Ark.  Noah was 600 years old and brought his family into the Ark.  The water of the springs of the depths was released and the stores of water above were opened.  All entered the Ark, as G-d had commanded Noah.

The water floods the world from below and from above.  We have seen water below and above before: in Creation, Ch. 1:6, G-d separated between the waters above and below and made the heavens between.  There He separated the waters; here He is releasing all the water, reversing the Creation.

3rd aliya (7:17-8:14).  The Flood covers the earth.  All living things die, save Noah and all that are in the Ark.  G-d remembers Noah.  The waters recede.  The Ark rests on Mt. Ararat.  Noah sends out the raven.  Then Noah sends out the dove to see if the water has receded enough for land to be inhabitable.  She returns for she has found no place to rest.   After 7 days, she is sent out again and returns with an olive branch.  The third time she is sent out, she does not return.  Noah removes the covering and sees there is dry land.

There is a lot of detail of water and of time.  The rising water, the receding water, how many days it rained, how many days it took to recede.  This stands in contrast to the initial creation of the world.  In creation, each thing created happened immediately, each day crisp and defined.  And after 6 days, the creation ceased.  In this recreation, the covering of the world with water took time; the receding of the water took time.  Why?

This is the most crucial part of this story.  The world was not destroyed – I mean, not back to “tohu v’vohu – to void and empty”.  G-d did not look at the evil of the world – man and animals – and destroy the world.  He could have chosen to destroy the world entirely and begin anew with another 6 days of creation.  He did not do that.  He “recreated” the existing world – saving Noah, saving the world, covering it slowly with the water that existed.

The story of the Torah is G-d’s love of and commitment to man.  He saves the world.  He saves Noah.  But even before this; Adam and Eve sinned and were punished.  But not destroyed.  Cain killed Abel, the most egregious sin, and is punished; but is not himself killed.  G-d is committed to this world and is committed to mankind.  He destroys the world naturally, maintaining it, covering it slowly with water and waiting for the water to recede.  That very process communicates His commitment to His world and to mankind.

4th aliya (8:15-9:7).  Noah is told to leave the Ark with his family and with the animals, blessing the animals to teem over the land.  Noah offered sacrifices on an altar.  G-d committed to never again curse land and animals because of man, nor the constellations.  G-d blesses Noah and family to be fruitful and multiply, to fill the earth.  They may eat creatures but may not kill man.

The echoes of Creation continue.  Noah and the animals receive the same blessings made to the animals and to man in Creation.  Noah is the new Adam.  But with one dramatic difference.  G-d pledges that never again will there be a destruction of land, animals or seasons.  This was not promised at Creation.

The notion of G-d promising is shocking.  G-d making promises to man? Is it prompted by Noah’s offering a sacrifice?  That’s all it takes to get a Divine promise for all time?  Could it be that one little act of offering sacrifices outweighs all the horrible evil that man is capable of perpetrating, and has perpetrated in the history of mankind – that’s all it takes to guarantee the world will never deserve to be destroyed?  And just the notion that He promises to us?  The clear message of the Torah is that mankind is so precious to G-d that He commits to us, regardless of our failings.

5th aliya (9:8-17).  G-d tells Noah and his family that He is making a covenant with all living things that the world will never again be destroyed by Flood.  The rainbow is a sign of this covenant between us.  I will see the rainbow and remember this eternal covenant.

The word “brit”, covenant occurs 7 times in this paragraph of 9 verses.  We are so familiar with the rainbow after the flood story that its plain meaning slips by unnoticed.  G-d is pledging himself to the world.  And, as if to make sure He Himself doesn’t forget, He places a sign, a reminder of his pledge.

This rainbow is a love story.  Noah has got to be looking around, wondering, “is He talking to me?  What did I do to deserve this?  The Master of the Universe, who just covered the world in water due to man’s failings, He is committing to me?  And binding Himself with a rainbow, lest He forget?”

The Creation story crowned man with majesty, created in the image of G-d.  The Flood recreation story is a love story, the love of G-d for man, the commitment He has to man.  And while a covenant has 2 parties, each of whom pledges to the other, in this covenant nothing is demanded of man.  Only He pledges to us.

6th aliya (9:18-10:32).  Noah plants a vineyard, becomes drunk and lies exposed in his tent.  Cham sees Noah; the other sons cover him without looking.  Cham is cursed, Shem is blessed, Yefet granted beauty.  Noah’s numerous descendents are listed, distinctive in geography and in language.

Noah seems to follow in Adam’s agrarian footsteps – Adam was placed in the Garden of Eden, Noah plants a vineyard.  But the decline of the new man is not long in coming.  The generations of Noah are described as different, distinct, separated into nations, into languages and distinct geographic regions.  This gives rise to Nimrod, the warrior – distinctions and groupings give rise naturally to competition.

7th aliya (11:1-32).  The Tower of Babel, an attempt to unite mankind results in a dispersion and proliferation of languages.  The genealogy of Noah’s descendants continues until Avraham’s family is introduced, who journey toward the land of Israel.

The story of the Tower of Babel begins as a desire for unity, ends with people scattered the world over.  The desire for unity would seem to be a good thing.  However, unity often implies united under me, coercing all to be like me.  World history is the history of empires, seeking to make the world a better place by being just like me.  The theme of dispersion, of exile which began with Adam being exiled from the Garden of Eden, and Cain exiled to wander the world has its next chapter with the dispersion, the exile of the builders of the Tower of Babel.

This dispersion and exile of the first 2 parshiot of the Torah will be reversed with the call to Avraham to come to the land of Israel.