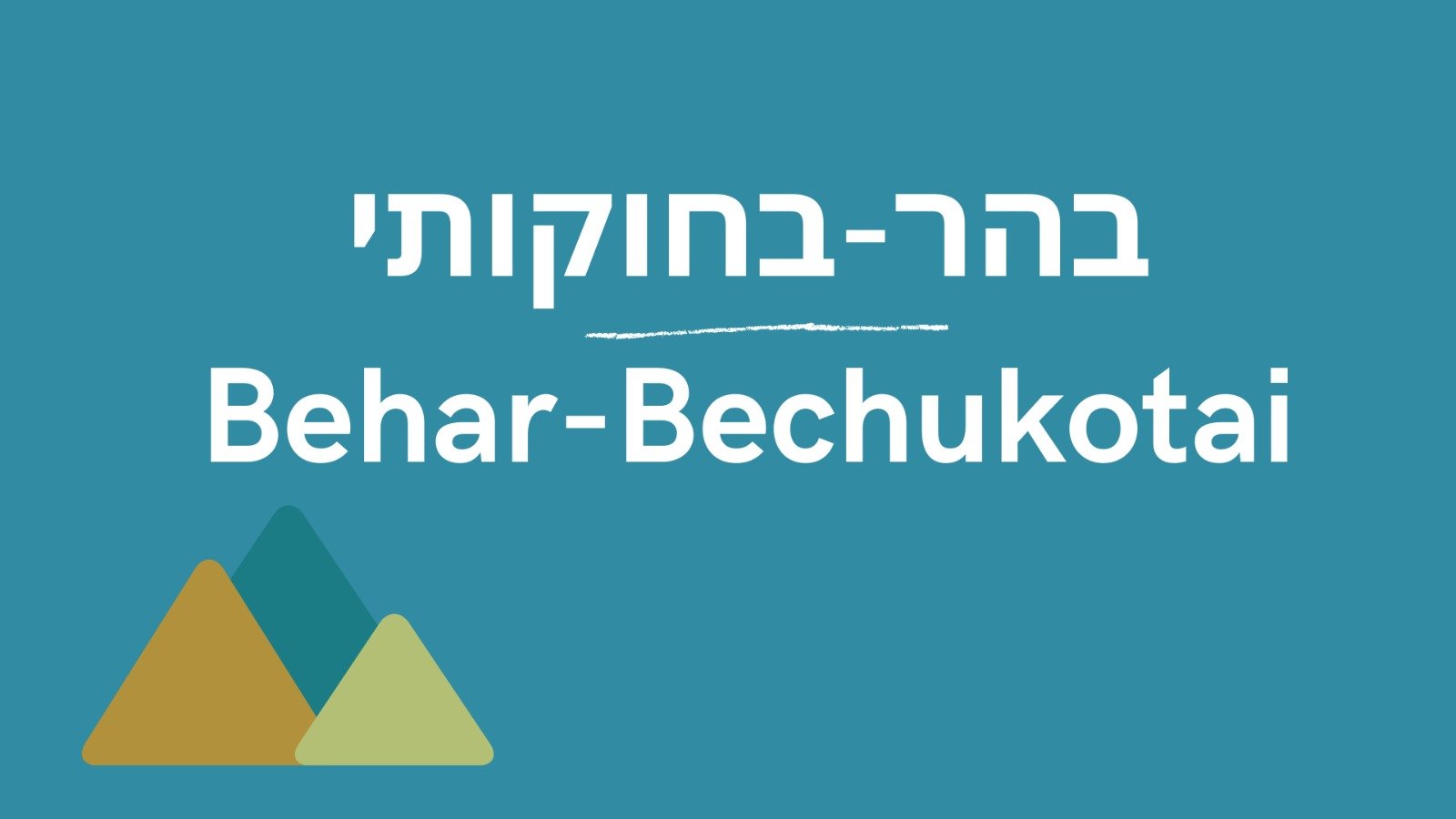 1st aliya (Vayikra 25:1-18) Shmita: The Land of Israel has its Shabbat. Work 6 years, the 7th is a Shabbat to G-d. What grows on its own is available to be used. Yovel: 7 cycles of 7 years is followed by Yovel, the 50th year, the Jubilee year. It is holy; pronounce liberty throughout the land. Slaves go free; land returns to its original owner. When selling your land, do not abuse the buyer knowing the land will return to you in the 50th year. Sell it commensurate with the years the buyer will have until Yovel. Keeping these laws will allow you to be secure in the land.

There are 2 aspects to the holiness of the land of Israel. First, it is the land of the Jewish nation. We have unique laws of kindness in agriculture; leaving parts for the poor, giving support to the Cohanim and Leviim. These laws only apply in our land, where we build our unique Jewish society.

And second, our land is where G-d has invited us to be close to Him. We are closest to Him in His home, in the Mikdash. And in Jerusalem, His city. But the holiness of proximity to Him seeps outward from Jerusalem to the entire land. Hence, the land is holy both in our standing close to the King. And in it being our unique homeland, the place where we live according to our unique laws, reflecting Jewish philosophy.

Shmita tells us that we need realize that all the earth is His. It has its Shabbat – by refraining from work on the 7th year, we affirm that the land is ours but temporarily. We are but sojourners on this land; it is His. Slaves go free in Yovel; for we are all His servants.

2nd aliya (25:19-28) Don’t be concerned that you will not have enough to eat if you rest the land; I will provide. Let the land not be permanently sold; for the land is Mine, you but sojourners on it. If one becomes needy and sells his field, redeem it. The seller may also redeem it according to the years left until it returns to him in Yovel.

After introducing our limited ownership in the land of Israel, the Torah switches to our responsibilities one to another. When people are in trouble, help them out. The sale of a field cannot end well. It’s losing a job. In an agrarian society, what will this former landowner do for a living? This is the beginning of a downward spiral. Redeem his field; get it back for him, so he can make a living. This is as the Talmud states; the highest form of tzedaka is giving a person a job. Redeeming the field is returning his way of making a living to him.

3rd aliya (25:29-38) A house in a city may also be redeemed if sold, but only within the first year. After that, the sale is permanent. Homes in open towns are considered like fields; they may be redeemed and they return in Yovel. The towns of the Leviim, even if walled, are always able to be redeemed and they too return in Yovel. When one is in need, help him. Do not charge interest; give him life. I am G-d who took you out of Egypt to give you this land and to be your G-d.

The Talmud points out that the progression of stories the Torah presents here is from bad to worse. A forced sale of a field due to poverty. Then the sale of a home. Then the need for a loan. And in the next aliya, sold as a slave. The cheapest tsedaka is the first one; getting the field back, avoiding this whole collapse.

4th aliya (25:39-26:9) If one is sold to you as a slave, do not oppress him. Treat him as a worker. He goes free in the Yovel year. For you are My servants. Slaves purchased from the surrounding nations are as property that passes to future generations. If a Jew is sold to a non-Jew, a relative shall redeem him, for the Jewish people are servants to Me, My servants that I redeemed from Egypt. (Bechukotai) And if you will do all my mitzvoth you will have bounty, peace, unusual success against your enemies. I will turn to you, multiply you and fulfill My covenant with you.

Parshat Bechukotai, though short, is powerful. Following an entire book of holiness, the stakes are laid out. The pursuit of holiness in the land that is holy is a high stakes endeavor. The achievement brings wonderful blessing; food, peace, health. For us, who enjoy walking in this holy place, the blessings are abundant. Though we know from history, so is the …. opposite.

5th aliya (26:10-46) And I will be in your midst; I, your G-d, You, my people. I will remove the yokes from you and you will walk proudly. But if you do not do My mitzvoth, I too will not pay attention to you. You will be subjected to illness, to enemies, to drought. If you persist in ignoring Me, I will persist in ignoring you, leaving you vulnerable to war, pestilence, famine. Your holy places will be vanquished, your cities destroyed; you will be scattered around the world. Then the land will have the rest of its Shmita. You will be panicked in your exile, afraid of a driven leaf. You will admit your failings; I will remember my promises to you. Even in your dispersion, I will not allow you to be destroyed.

Failure to live up to the demands of this holy place brings desolation and exile. The desolation of the land of Israel without the Jewish people is legendary. Chilling. The Jewish diaspora, Jewish history, is predicted here; who needs a description of its fulfillment? Jewish suffering in exile was taken by other religions to be a sign of the rejection of the Jew. The return to the land of Israel, so unexpected, so unprecedented, and so dynamic is a powerful refutation of that. If the exile was Divine displeasure with our dismissive attitude to Him, the return to the land can only be Divine pleasure in bringing us close. And a charge for us; to never be dismissive of Him, but to engage, to search, to reach. What privileged times we, the undeserving, are fortunate to be a part of. And how vigilant we need be to not again be dismissive of Him in His land.

6th aliya (27:1-15) When you make a vow of your value to G-d, there are set values for different ages and stations. This value is given to the Mikdash. If you pledge an animal, it is given and should not be switched. A pledge of a home may be given or redeemed.

Following the chilling section of the curses, the book of Vayikra ends with a full chapter of laws of vows. Generosity inspires contributions to the Mikdash. That’s a good thing. The religious centre of the Jewish people needs contributions. But this section is not only about what is given; but also what is not. When I pledge my value, is my intent to become a monk, giving up my life to serve in the Mikdash? The Torah does not endorse that. Pay money; keep your station in life. The Torah imposes the interpretation of vows of people and their value to be monetary gifts; but not Temple slaves. If you pledge an animal? Fine, let that become a sacrifice. But not you. Or any around you. A home too; the Torah does not want the Mikdash to acquire vast holdings. Homes are for people; the Mikdash is to be splendid, grand, and inspiring. But it is not to become a vast financial empire.

7th aliya (27:16-34) If a field is pledged, it’s worth until Yovel is calculated. That value is given to the Mikdash to redeem the field. If it is not redeemed, it remains with the Mikdash even after Yovel. Property which becomes owned by the Mikdash may not be redeemed.

Fields are the quintessential means of livelihood. If you wanted the Mikdash to be a financial empire, fields would be the place to start. But the Torah’s default is that a donation of a field ought to be redeemed. Fields are for the people to make a living; not for the Mikdash.

The book of Vayikra, the book of man’s approach to G-d, ends with a sober balance. While we approach G-d, dedicate our lives to Him, reach for Him, and He for us, the Torah protects us from going too far, from divesting of our assets, ridding ourselves of our homes and becoming a Temple slave, giving our all to the Mikdash. Our challenge is to be holy in our homes and our fields while reaching for the Divine.