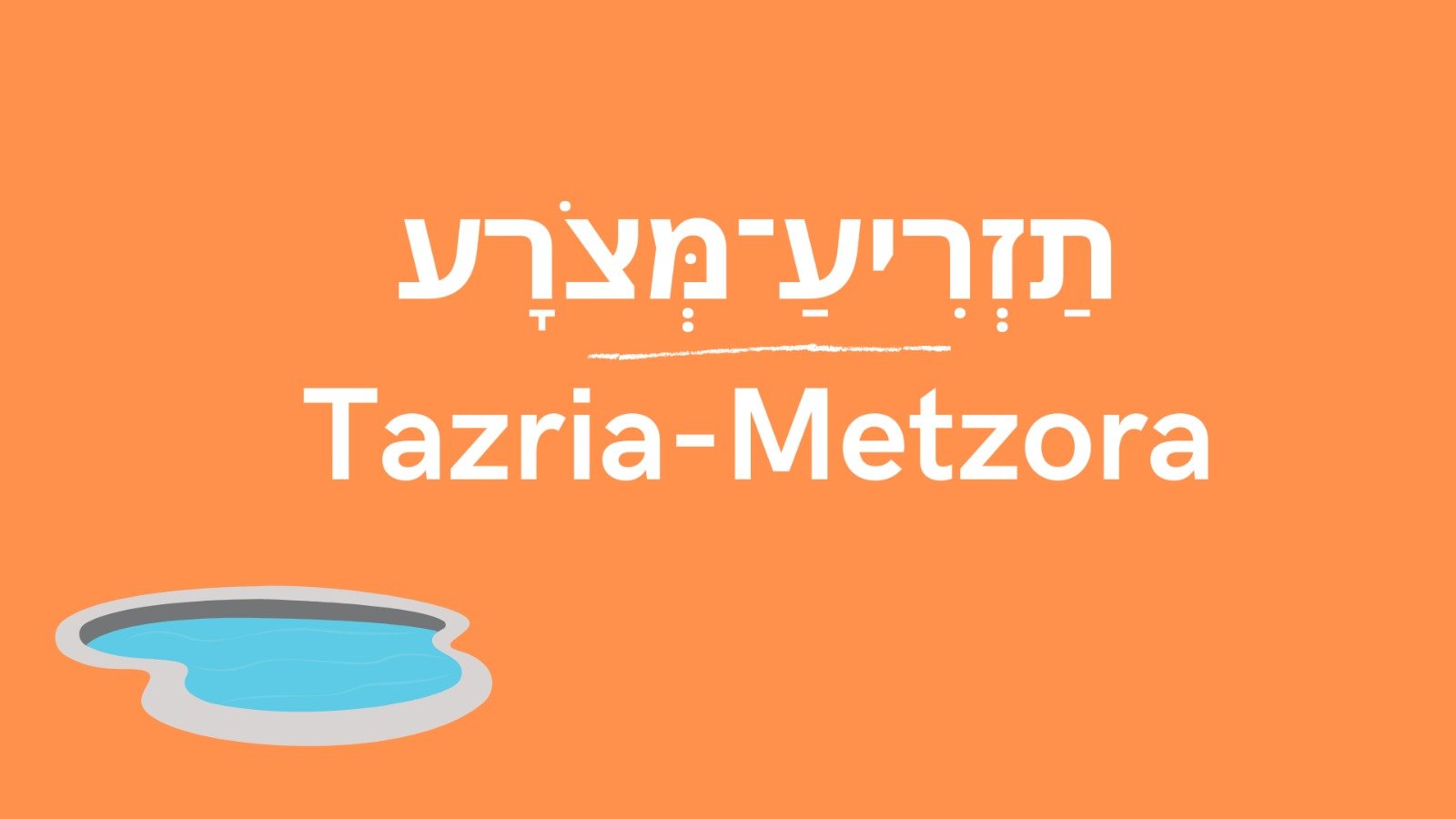 The double parsha of Tazria-Metzora is challenging.  Their theme is simple: entry to the Mikdash is restricted for those who are Tamei.  There are a number of situations that render a person Tamei.  The removal of the Tuma status allows re-entry to the Mikdash.  Who becomes Tamei and how the Tuma is removed is outlined.

It is challenging to understand why these people become Tamei.  And why they are restricted from entering the Mikdash.

I will propose an approach and attempt to trace it through the aliyot.  I think this approach has merit; though not at all sure this is the Torah’s intent.

The Mikdash is the place of the rendezvous of man and G-d.  The notion of finite man encountering the Infinite is frightening and humbling.  But it is also grand.  If He is inviting us to meet Him in His Home – well, He must think of us as worthy to meet.  Man is His worthy partner.  For Man is created in His Image.  Man is majestic.  Noble.  Elevated.  Distinguished.  Unique.  G-d invites majestic, noble man to the Mikdash.

However, life sometimes causes us to feel less than majestic, not so noble, ordinary and not elevated, rather pedestrian.  And in particular, in those things that we share with animals: food, procreation, illness, death.

When confronted with our limitations, the physicality we share with animals, our mortality, we can lose the nobility of our station.  We can feel like glorious animals.  That may be the meaning of tuma.  The tuma in our parsha is what is called tuma whose source is our own body: childbirth, Tzarat (loosely translated as leprosy), and emissions from procreative organs.  These very earthy parts of our being can damage our sense of nobility, making us feel closer to animals than to angels.  Man in his nobility is invited to approach G-d; man when doubting his nobility needs to be restored before approaching G-d.  The process of becoming Tahor is the process of reclaiming our nobility.  Human nobility is required for the rendezvous with the Divine in His home.

1st aliya (Vayikra 12:1-13:23) Childbirth renders a woman tamei (tmeya).  At the end of the tuma, 40 days for a male, 80 days for female child, she brings an offering of an olah and a chatat.  She may then enter the Mikdash.  Tzarat has different forms and different laws.  It can be a white patch on the skin, with white hair, cover the entire body, or appear on a recovered inflammation.  The Cohen checks to determine if it is Tzarat or if it is an innocuous skin condition.  Some appearances are unclear and require a 7 day interval to determine if Tzarat or innocuous.

Childbirth is joyous; yet, the woman becomes tmeya, restricting her entry to the Mikdash.  Along the theme mentioned above, experiences that we share with animals may damage our sense of the nobility of being human.  Childbirth, though wonderful, is earthy.  To recapture the higher nobility of humanity, the woman brings offerings, as a reboot, a reaffirmation of the higher calling in being human.

Tzarat has many details.  It appears as unusual colorations of the skin.  The skin is the visible part of our bodies.  One with Tzarat would be self conscious, the Tzarat being somewhat embarrassing.  One manner in which mankind is distinguished from animals is in our social nature.  Being self conscious of our appearance would injure our social nature.  This damage to our sense of nobility also demands a reboot in the form of a ceremony at the conclusion of the Tzarat, outlined in the later aliyot.

2nd aliya (13:24-39)  Tzarat can also be found on skin that suffered a burn or on the head or beard.   The Cohen assesses the nature of the discoloration determining whether it requires 7-day quarantine and reassessment to determine if tamei or tahor.

While this aliya continues the topic of the first aliya, as does the 3rd aliya, the breaks in the aliyot are deliberate.  The first 3 aliyot all end with a verse declaring the person tahor.  If we have an opportunity to be positive, let’s land on that, not a verse that declares the person tamei.

3rd aliya (13:40-54)  Tzarat can also appear on the head or beard, with hair loss and skin discoloration.  When a person is declared to have Tzarat, he rends his garments, lets his hair grow, covers himself to his lips and dwells outside of the camp.  Garments displaying specific discoloration are deemed to have garment Tzarat.  The Cohen assesses the color and shape, quarantining if necessary.  If determined to have T zarat, the garment is burned.

After the detailed description of when a person has Tzarat and when not, the consequence of Tzarat is described.  The person acts as a mourner would act: garment torn, hair grows, covered head (a practice we no longer generally observe as mourners).  But more dramatically: he is sequestered out of the populated area.

This isolation is one of the things that prompts the midrashic comment that Tzarat is for lashon hara – the punishment fits the transgression.  If you can’t treat people respectfully, then spend some time alone.  Or, in line with my approach outlined above: proximity to G-d demands that we display the nobility of man.  Tzarat, an embarrassing discoloration that makes us feel self conscious, diminishes our sense of self.  Isolation allows us to reflect on our self worth.  Self worth has nothing to do with how we look to others, whether our skin looks good or whether our dress looks fine.  Self worth is intrinsic; we have self worth simply because we are created in the image of G-d.

Clothing too is uniquely human.  Clothing is an expression of human dignity.  The tumah of a garment restricts the wearer from entry to the Mikdash, as human dignity is diminished by this oddly blemished garment.

4th aliya (13:55-14:20) The regulations of tuma of garments is completed.  The process of being tahor following Tzarat of the body is outlined.  When the Cohen determines that the Tzarat of the skin has subsided, the person with the Tzarat may reenter the camp though for 7 additional days he may not enter the Mikdash.  2 birds are taken, one slaughtered, the other dipped into its blood, along with cedar wood, a red thread and hyssop. His hair is shaved.  On the 8th day he brings offerings.  Blood and oil are placed on his right ear, thumb and toe.

The details of the Tzarat and the purification from it are numerous; too numerous to properly outline here.  One detail though is worth mentioning.  At the beginning of the return from quarantine of the person with Tzarat, 2 birds are taken; one slaughtered, one not.  This is not done in the Mikdash, as the person is out of the entire camp.  We have heard of the 2, one slaughtered, one not before.  The 2 goats of Yom Kippur; one slaughtered, one sent to the wilderness.  And also, at the end of the process, blood and oil placed on the right ear, thumb and toe.  That echoes what was done to the Cohanim in their inauguration – also on their 8th day.  While the parallel to the Yom Kippur goats may make one feel contrite; the parallel to the inauguration of the Cohen would engender feelings of pride and a sense that I too am holy and priestly.

5th aliya (14:21-32) If one is unable to afford the above offerings, a less expensive alternative is offered, including birds in place of one of the animal offerings.  A similar process to the one with 2 animals is performed. As with the earlier aliyot the 4th and 5th end with the word tahor.

6th aliya (14:33-15:15) In the land of Israel, homes will be subject to Tzarat as well.  The Cohen will examine the marks.  If declared Tzarat, all that is in the home becomes tamei, hence all shall be removed before the Cohen’s declaration.  If the marks spread over the next 7 days, the Cohen shall order stones removed and replaced.  If the spread persists, the Cohen may order the home demolished.  If the Cohen declares the home tahor, 2 birds are taken, one slaughtered, the other dipped in its blood with cedar wood, a crimson thread and hyssop.  The bird is set free.  A Zav, a male, has a discharge from his organ of procreation that is unusual.  He renders others tamei and requires a purification process of 2 bird offerings at the end of 7 days.

Continuing our theme that tuma is associated with those parts of our lives that may hinder our sense of dignity, our home can be the source not of diminished dignity but of hubris.  Oh we moderns know all too well how the fantastic wealth of our times can distort healthy self perception.  Man’s dignity lies not in the grandness of his home, but in the grandeur of his person.  A pock on your house if it has inflated human dignity to become hubris.

7th aliya (15:16-33) A regular sexual discharge of a man renders a low level of tuma.  A woman’s regular menstrual bleeding renders her temeya for 7 days, transferring her tuma to others including through touch.  A woman who has bleeding inconsistent with her regular period is a Zava, a similar Tuma to the male Zav.  Offerings are brought following the cessation of this unusual bleeding.

Procreation may also lead to an inflated self image; creation is not just His, but is ours.  He gives life.  We give life.  Healthy self image of our dignity and majesty can be damaged by our physicality in both directions; deflated and inflated.  Too low a view, that we nothing more than animals.  Or too high, as creators, leaving less room for the Creator.