Shlomit’s Story: Returning To Where We Belong

Shlomit’s Story: Returning To Where We Belong 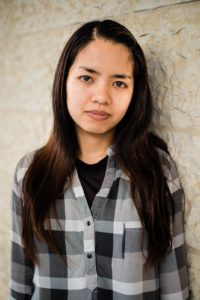 “I grew up in Kolasib, India, a district of Mizoram.

During the British rule of India, my great-great-grandparents were converted by missionaries to Christianity. One of our neighbors told my father about Judaism. He was interested in learning more about it, for it resonated deeply with him. He began to learn all he could about what it meant to be Jewish. In 1993, my parents fully accepted Judaism as their faith. In 1994, I was born.

The journey of my people is a long one. As converted Christians studying the Bible, they felt like there was something wrong with the way they were being told to observe and identify. When reading the stories of the exile of the ten tribes, we learned about the Northern Kingdom’s banishment to the diaspora. We learned about Menashe, the son of Joseph. In our tradition, we believe that our forefather’s name was Manmasi. Following the trajectory of our people, and how we ended up in India, we believe that we actually descend from the tribe of Menashe.

Our oral history shares that our people were exiled from our beloved homeland, and then we traveled through Persia, Afghanistan, Tibet, China, and then on to India, where our people settled in the Indian districts of Manipur and Mizoram.  Our ancient festivals are similar to present-day Jewish festivals, and so are our Funeral rites, birth, and marriage ceremonies. We have ancient songs passed down from generation to generation that shares the stories of what we now believe to be the exodus from Egypt, and other Biblical events. We have our own version of Miriam’s Prayer after leaving Egypt, and we also have song called, “Sikpui Hla” and it translates like this;

“While we are preparing for the Sikpui Feast,

As we march along fighting our foes,

We are being led by pillar of cloud by day,

And pillar of fire by night.

Our enemies, O ye folks, are thick with fury,

Come out with your shields and arrows.

Fighting our enemies all day long,

We march forward as cloud-fire goes before us.

The enemies we fought all day long,

And draw the water that springs out of the rock.”

Before my father began his research he did not know that his family originally believed that they had Jewish roots. When he was learning more about Judaism, he contacted the Jewish community in Mumbai and learned about the Bnei Menashe. After extensive historical family research and evaluation of our own practices and belief systems, he discovered that we were a part of the group identified as Bnei Menashe.

Though our identifying as such has become highly political and disputed, we believe that we are one of the lost ten tribes. We believe that we descend from Jews and that Israel is our homeland.

Once we knew who we were, we had to begin our long journey back home.”

An excerpt from Shlomit’s Story: Returning To Where We Belong- a chapter of the new book, “Layers: Personal Narratives of Struggle, Resilience, and Growth From Jewish Women” published by Toby Press, written by Shira Lankin Sheps of The Layers Project Magazine.

Shlomit is one of 4,000 Bnei Menashe brought on aliyah to Israel by Shavei Israel.

To find out what happened to Shlomit and her family on their journey to Israel and her Judaism:

To purchase your copy of the book from USA, Canada, and worldwide- click here: https://korenpub.com/products/the-layers-project

To purchase your copy from Israel click here: https://korenpub.co.il/products/layers