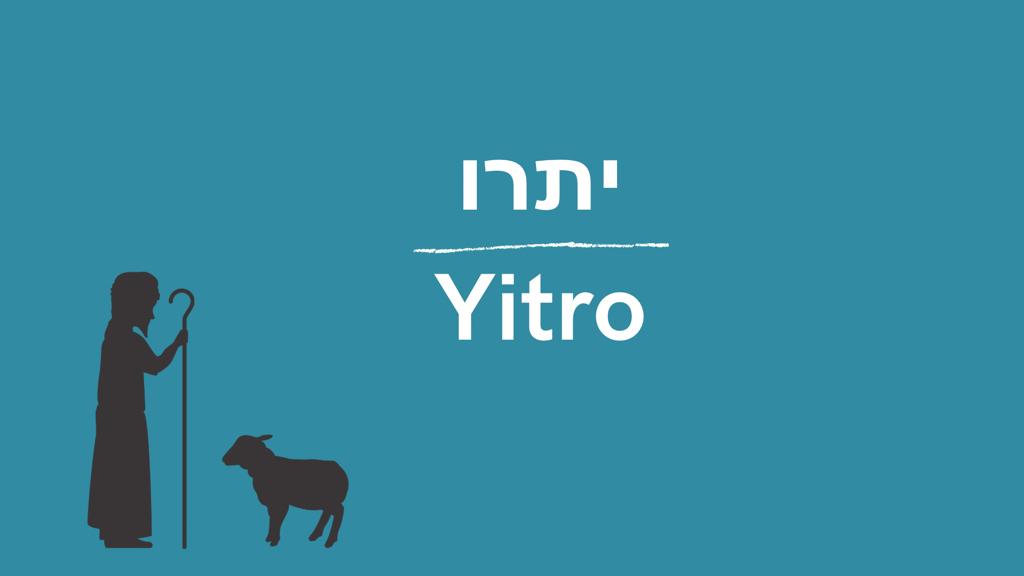 Yitro joins Moshe.  He advises Moshe in delegating to judges.  At Mt. Sinai, G-d offers the Jewish people to be a treasured people.  The Ten Commandments are given at Sinai.  The people quake in response.

1st aliya (18:1-12) Yitro, Moshe’s father in law, moved by the exodus from Egypt, travels to meet Moshe, bringing Tzippora and the 2 sons.  Moshe greets them and tells them of all that has happened.  Yitro blesses G-d, affirming that now he knows G-d is great and offers offerings to Him.

Rashi claims that this story of Yitro occurs after the giving of the Torah – meaning, the Torah plucked it from its proper chronology and stuck it here.  Presumably for a good reason.  Why place this story here?

You could answer either by looking at what comes next or from what just happened.  The story at the end of last week’s Parsha was the war with Amalek.  Juxtaposed to Amalek is Yitro.  There are different types of non-Jews that we will encounter in history; Amalek and Yitro.  Amalek seeks our harm.  Yitro seeks our G-d.  Amalek sees our weakness.  Yitro sees our greatness.

2nd aliya (18:13-23) Yitro observes the people standing and waiting all day for Moshe to adjudicate.  Yitro questions this.  Moshe responds: the people come seeking G-d; seeking adjudication, and I teach them G-d’s laws.  Yitro criticizes Moshe.  And suggests: You inquire of G-d on their behalf.  And teach them G-d’s laws.  But in addition, choose Judges who can adjudicate in your stead.  Judges who are substantive, G-d fearing, men of truth and abhorring inappropriate gain.

Moshe told Yitro that he has 3 functions: aiding those seeking G-d, adjudicating disputes, and teaching G-d’s commands.  Yitro tells him; others can settle disputes.  But as for the inquiry of G-d and teaching G-d’s commands, well for those, no one but you could possibly do them.  For when it comes to communications from G-d, you are unique, irreplaceable, sui generis, one of a kind.

This exchange presents a fundamental principle of the Torah: that G-d speaks to Moshe in a way that He does not, nor will He in the future ever do again with anyone else.  When Moshe says that people come to him seeking G-d, what he means is: I have access to G-d.  He speaks to me.  (Speaking to G-d isn’t the trick; the trick is when He answers back.)  Similarly, when Moshe says that he teaches G-d’s law, what he means is that G-d communicates those laws to him and to no one else.

This could very well be the prime purpose of this Yitro story.  For, in the very next story, the giving of the Torah, the very same theme of Moshe’s uniqueness as the one to whom G-d speaks is central.

3rd aliya (18:24-27) Moshe heard.  He chose judges, with only the most difficult cases brought to him.  Moshe sent Yitro home.

It takes an honest leader to accept suggestions to improve.  Moshe displays his honesty and humility – if the suggestion is good, embrace it.  Just as Yitro accepted the news of the Exodus and affirmed One G-d, so too, Moshe admits he could improve his system.  Two men of honesty and humility.

4th aliya (19:1-6) The people camped in the Sinai desert opposite the mountain.  Moshe ascended the mountain.  G-d told him: tell the people.  If you will listen to Me, keep My covenant, then you will be a kingdom of cohanim and a holy nation.  Tell that to the Jewish people.

This short aliya screams of significance: it is the invitation to an intimate encounter.  The entire Torah to this point has been G-d’s reach for man.  And here is the culmination of that reach.  Akin to a Divine hug.  G-d created the world, an act of desire for a world.  He created man.  He reached out to Avraham, promising, unsolicited, the land of Israel.  But He kept His distance.  Until Egypt, when He reached again to pull the Jewish people out of slavery.  Now He tells Moshe that He is pulling the Jewish people close as His closest, cohanim, those who are in His inner sanctum.

5th aliya (19:7-19) Moshe presents G-d’s words to the people.  They respond: all that G-d says we will do.  G-d says: I will come to you in a cloud, so the people shall hear that I speak with you.  Prepare them for 3 days for on the 3rd day I will descend in the view of all the people.  No one shall touch the mountain.  Moshe prepared the people.  On the third day, there was lightning and thunder, a thick cloud, and a powerful shofar sound.  The people in the camp were afraid.  Moshe brought them out to the mountain.  It was all in smoke for G-d descended in fire.  The mountain shook.  The shofar increased in power.  Moshe spoke; G-d’s voice emanated.

The revelation of Sinai is a culmination of G-d’s reach for man.  He promises, He redeems us, and now He speaks, communicates.

And although this moment is a pinnacle moment in the history of man, what the people actually heard is not at all clear.  The narrative, without the midrashim, seems to relate that the people will overhear G-d speaking to Moshe.  After all, Divine communication to man is overwhelming, inconsistent with our finite being.  The people are afraid – Moshe needs to coax them out.  Afterward, in aliya 7, the people tell Moshe that they can’t take hearing G-d’s voice or they will die.

It is here that we really see Moshe’s uniqueness: as the only one to be able to hear G-d’s word and survive.  The Torah will describe him as such later – no one else could tolerate “panim el panim”, direct communication from G-d.  Moshe’s uniqueness is not as a leader, a legislator, a King, a warrior, a motivational speaker.  His uniqueness is as the one who hears G-d’s words, His commands, His mitzvoth, and is able to withstand that and survive.

The purpose of the revelation at Sinai is to expose the people to the experience, up close, of the communication from G-d to Moshe.  This experience will reinforce for them that G-d speaks to Moshe so that they accept Moshe’s teachings later as being from G-d.  And it will overwhelm them and bring them to believe in G-d.

6th aliya (19:20-20:14) G-d descended onto the mountain and called Moshe up the mountain.  He warned him to again instruct the people to not touch the mountain for they would die.  The Ten Commandments: I am G-d, no idols before Me, don’t use G-d’s name in vain, Shabbat, honor parents, don’t murder, adultery, theft, false testimony, covet.

The Midrash points out that the first 2 commands are in the 2nd person, G-d speaking directly to the people: I am G-d.   And the rest in the 3rd person, seemingly Moshe speaking in G-d’s name about Him: do no take His name in vain.  That is contrary to what I said above – that the people did not hear the content of what G-d said but only overheard Him speaking with Moshe.  The Midrash reconciles this by stating that after hearing the first 2 commandments directly from G-d, the people did in fact die on the spot from the overwhelming experience of revelation.  Then, they came back to life.  From then on Moshe spoke in G-d’s name, as they were simply unable to withstand the power of the direct experience of G-d.

7th aliya (20:15-23) The people recoiled from seeing the thunder and lightning, the shofar sound, and the smoking mountain.  They said to Moshe: let G-d speak with you, but not to us, for we do not want to die.  Moshe assured them that G-d came so they would fear Him.  G-d commanded:  You saw that I spoke with you from heaven.  Therefore have no other gods; rather make an earthen altar.

2 symbols linger from the Sinai experience: the shofar and the cloud.  The shofar is our way of recalling His Presence; the cloud is His way of indicating His Presence.  From now on, when the cloud hovers over the Ohel Moed, it is to indicate that the G-d’s Presence is there, speaking to Moshe.  Like the cloud and smoke of Mt. Sinai.

And the shofar is our way of recalling His Presence at Mt. Sinai.  On Rosh Hashana, when we are to feel especially close with G-d, the shofar of Sinai is recalled.  The ultimate redemption is also heralded by the Shofar Gadol.  The shofar endures as a symbol of the intimate Presence of G-d, as it did at Mt. Sinai.