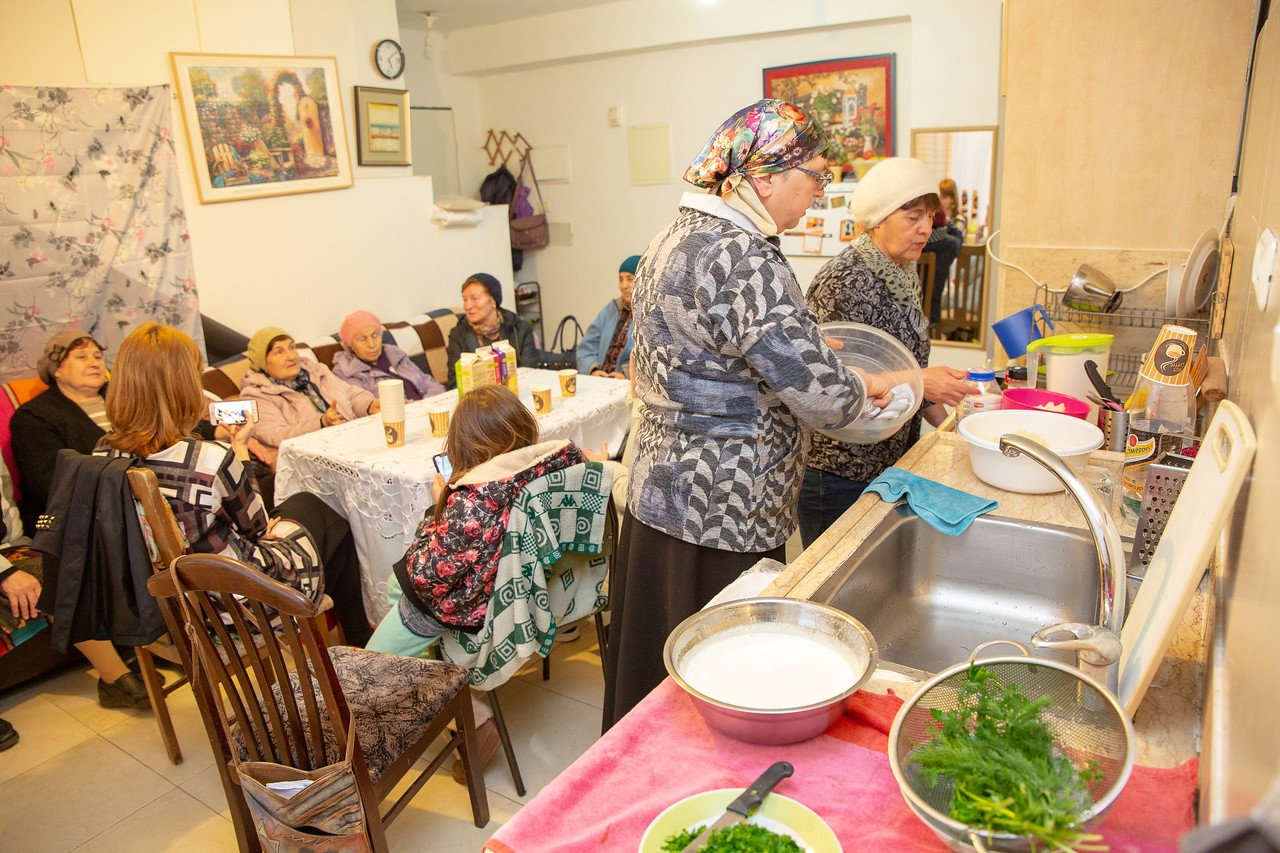 This year, women of Beit Shemesh community started their preparations for Passover early and on a positive note: by joining a special culinary evening organized by Shavei Israel in the framework of Ma’ani centerI, its heritage project. Tova Filchagova, the community leader who made aliyah to Israel 5 years ago, hosted us at her place with a wonderful view of the surrounding hills, contributing to a warm and relaxing atmosphere, when many new details and facts about the life in the village of Vysoki, South Russia, were recalled in the most natural way.

Each participant had a different background and her own fascinating story. Some of them came to Israel more than twenty years ago, when the gates of aliyah had not yet been opened for the Subbotnik Jews, and pictured themselves an integral part of the local society. Others had undergone a long conversion process in the rabbinical court of Russia and subsequent application for the Israeli citizenship, months waiting for a decision on their cases. There are also many of those who still live in their native village, in the hope that the policy regarding the people of Vysoki will change, and only come to visit Israeli relatives: parents, children, brothers and sisters. Many families are still divided between the two states, which is especially felt on the eve of the holiday.

Of course, talking about prospects for the community of the Subbotnik Jews echoes the central theme of this evening – the approaching Pesach. Anna Lazarevna Bocharnikova, one of the elderly representatives of her community, now in the process of aliyah, without long prefaces starts to share memories of how, in Soviet times, the people of Vysoki baked matzah for the seder to the whole village. “We baked this matzah during the whole day, two days, three days, five days – baked every day,” she smiles. “Then we preserved this matzah in big bags and never touched it before Pesach. My mother used to sew these bags up and put it in a dry place. Some families were really large, ten kids and more, so they had to prepare more than one bag of matzah, sometimes five bags. Every person in the family needs one pound of flour, if there are five people in the family – then five pounds, eighty kg of flour were required.”

Tova Filchagova and Tamara Sobyleva cook potato kigel, one of the traditional Shabbos dishes that were served in Vysoki. While cooking, Tamara who made aliyah with the support of Shavei Israel about two years ago, recalls her experience of leading Jewish life in the village surrounded by non-Jewish neighbors. “We dipped the dishes into the pond to make them kosher, when a herd of cows was brought there, – Tamara laughes. – The rabbi hands the dishes to me, and I pronounce the blessing and dip it. And these people see dishes in bags and ask: what are you doing, water intake? We answer: no, this is such a tradition. Later we dipped dishes on the Ogarkov pond, where we found a special place with a wooden stairs into the water. It was used as a mikvah. Also we used wells, it was exotic, even in winter.”

Vera Yakovlevna Tabelskaya-Gridneva, a giyoret (a convert to Judaism) and a widow of Joseph Yakovlevich Gridnev, a Vysoki native, shares even more vivid memories of Passover that are intertwined with her first impressions of the village just after her wedding: “On the ceiling they always kept dishes in bags. My groom told me: this is for Pesach. What Pesach was, I had no idea. Later, when I spent more time in Vysoki, I understood everything. My mother-in-law told me that there shouldn’t be any non-kosher fat in the house, nothing, and even more amazing was that they were salting meat in barrels for the winter. This is what they called kosher meat”.

As the kigel takes its place in the oven, our conversation becomes more and more emotional and lively, the women are talking and interrupting each other, laughing, remembering old village songs, some of them are crying. “Tell her how we prepared the marmalade from the beetroots! – Tova says. – And the pumpkin was cooked in the oven, these are memories from our childhood! Friday, all the kids had a bath, the stove was red-hot, and surely, I can remember the taste, borscht, chicken, cast iron pots, such a beautiful pumpkin, in caramel, in the oven! Pumpkin and beetroot! Potatoes stew in the style of Vysoki, it was dark brown and extremely delicious, eggs and donuts in every home”.

“And we were always in a good mood!” her sister adds. “We had a healthy childhood, we all had milk, cows. Each family had a calf to be brought to a rezak (shoichet), the back part was usually sold, and the front part used as a food. Each household had about fifty geese. We always brought chickens, ducks and geese to the rezak, to slaughter it and remove the blood properly. He had a special sharp knife”.

“Cleaning for Pesach was a separate story”, says Anna Lazarevna. “After all, we had nothing of the modern devices or cleaning chemicals. We did everything with our own hands, by using bricks. We had special white bricks over there. And then the floor was washed and rubbed with sand. Wooden floor was unpainted, and so we scraped it with an ax, removed all old elements and then cleaned with some sand to make it look nice. Anyway, we were so happy to do it and smiled a lot”.

Despite the territorial remoteness of Vysoki from bigger Jewish communities, the Seder was held in accordance with all the rules. Anna Lazarevna recalls: “It was important that each house should have ke’ara (the Passover seder plate), that all components should be place on this ke’ara, all this was very strictly fulfilled. We had baked potatoes, baked egg, maror, horseradish, pumpkin, onions, everything. Salty water. The family gathered around the table and had Seder Pesach”.

All together, women recall the recipe of another traditional dish made of matzah – a pshennik. “I loved this pshennik so much,” Anna Lazarevna laughs, “and for some reason my mother didn’t cook it. However, my aunt always did, and I remember her mixing some crunched matzah with 25 eggs and goose fat in a bucket, stirring the dough — and placing it into the oven. You cannot imaging what a delicious food was this pie!”

“Necessity is a mother of invention,” – one of the women recalls an old Russian idiom, and this phrase regularly justifies itself, whether it is a question of making kosher mezuzah in conditions when people could not afford to acquire sacred Jewish texts, or using gears from the clock for making pestrilki (picks to make holes in the sheets of matzah), or many other situations when Jews had to resort to the very non-standard thinking for survival in a non-Jewish environment. In some way, the story of these women (by the way, all of them sisters, cousins or second cousins to each other) returns us to thinking about the life of the Jewish people in Egypt and the Exodus, that we will tell our children about on the night of Pesach – just as the Subbotnik Jews of Ilyinka and Vysoki did decades ago in Soviet Union.

By the way, potato kigel we cooked turned out to be absolutely fantastic, and we are glad to share below its recipe. And in order to reflect a bit of the truly family and touching atmosphere of the evening, we also bring to your attention photos and videos with songs that used to be popular in Vysoki.

Peel potatoes and onions. Grind potatoes, grate the onion. Put in a bowl.
Wash and chop the parsley. Add it to the potato.
Add salt and spices.
Add an egg. Mix with all the ingredients.
After that add wheat flour.
Stir again. Add 2-3 tablespoons of refined sunflower oil.
Mix and put in a baking dish. Sprinkle with grated hard cheese.
Bake 40-45 minutes at 180° C. in a preheated oven.