Baking matzah for Passover in the village of Vysoki 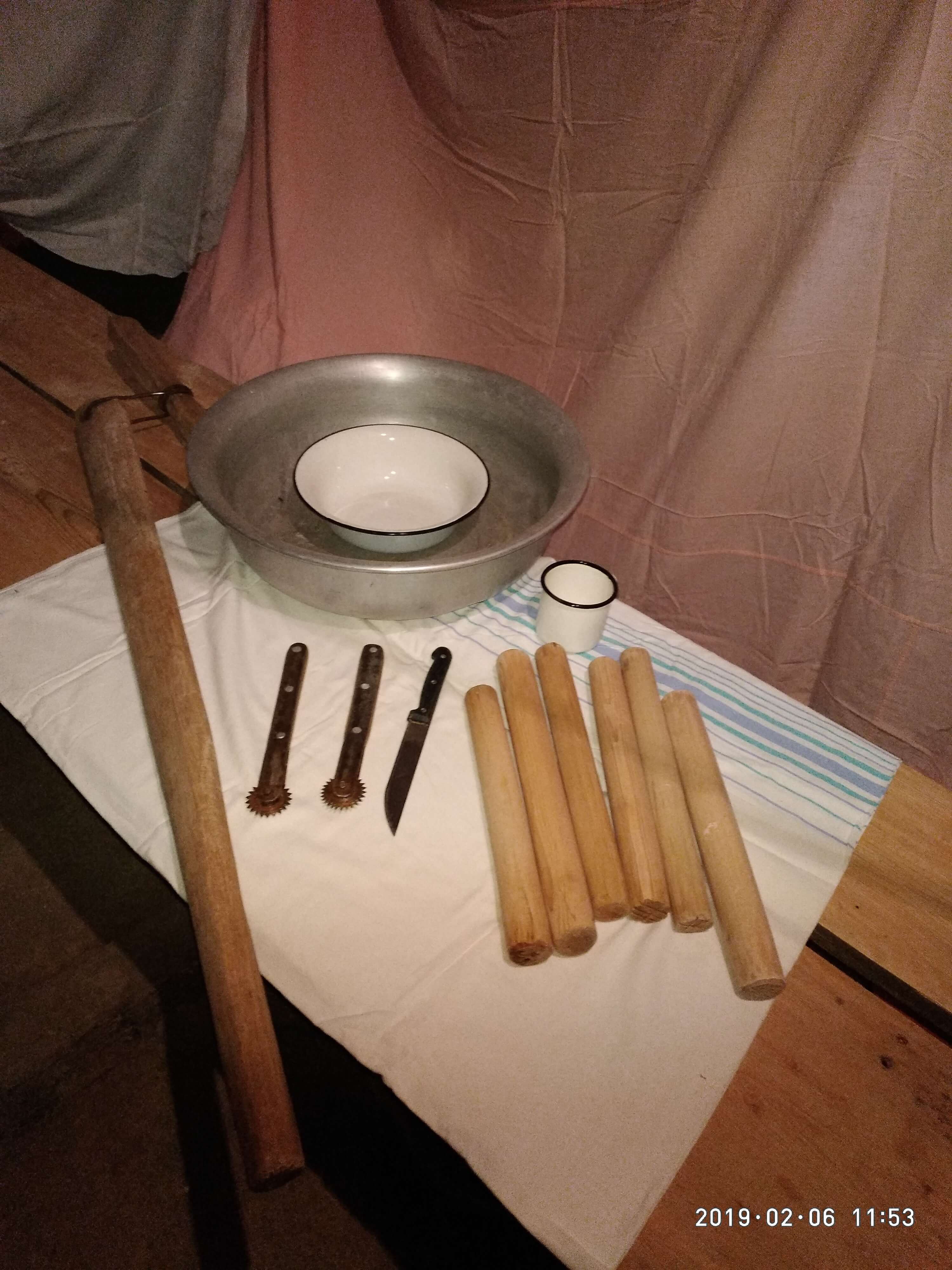 Baking matzah for Passover in the village of Vysoki

Posted at h in Recipes, Subbotniks by
0 Likes
Share

Matzah is an integral part of the Passover Seder everywhere. Although today this product is easily purchased even in the most distant Jewish communities of the globe, only a few decades ago, not everyone could afford to buy it in sufficient quantities for the holiday. However, the community of the Subbotnik Jews of Vysoky, South Russia, made impressive efforts to solve this problem by baking matzah at home by themselves.

Residents of the village shared with us some memories from their childhood. Thus, Maria Leonovna Gridneva used memories of her mother, Dina Isaevna Gridneva, to reproduce for us the whole process of baking kosher for Passover matzah.

For baking matzah people of Vysoki used special accessories that were usually hidden in a secret place during the year, to be brought out before the holiday.
They are:
– two wide and long well-planed boards;
– dough tamper. It was placed between the boards from one end. On the remaining free part of the boards, sheets of matzoh were thinly rolled out in the form of a circle;
– 2 bowls, large and small, for kneading dough;
– measuring cup for water;
– bucket for water;
– pestrilki (picks for making holes in a raw sheet of matzah);
– short rolling pins;
– a knife for cutting dough;
– wooden shovel to put raw matzah into the oven and take out the baked matzah from there

To prepare the matzah, several families worked together and engaged in the matzah baking for several days. Since the families were large and the holiday was long, they had to bake matzah in large amounts. In the old days, men from Vysoki traveled to Voronezh and baked their matzah with the local Jewish families.

In the village of Vysoki, matzah was baked in a Russian stove on the pod (horizontal surface in the stove for the fuel). To do this, people put firewood in the stove and heated it until very hot. Then all the heat and ash was removed from the furnace, after leaving hot coals at the mouth of the furnace. Next, a wet cloth was wound on a long stick and the ash and coal were wiped from it from under the stove. They washed this rag and swept it under the oven several times. The oven was then ready for baking matzah.
The raw matzah ready for baking was put on a shovel and put into the furnace on a pod, laying its entire area with several sheets. When the matzah was baked, it was removed with the same shovel. After it became cold, it was put into cotton bags.
As soon as the pod of the oven became cold, it was made red-hot once again. People swept the ashes with a wet rag and continued to bake the matzah.
A little later, people started to bake the matzah not only in the stove, but also with frying pans. The stove was heated, but the heat wasn’t scooped up, but moved to the walls of the stove. 3 holders were put in different places of the furnace. The raw matzah was placed in the frying pan and put with the help of a chaplya (a special device to put and remove pans from the stove) to the furnace on the taganok (stand, holder). So it was done with all 3 pans. When the matzah was baked, the pan was removed from the oven using a chaplya. Baked matzah was replaced with raw ones in the pan and sent to the oven. Such a cycle lasted until all the matzah was baked.
To knead the dough for matzah, one needs water and flour. Water was prepared in a bucket in advance, before the sunset of the day prior to the day of baking. One needs to sift the flour into a large bowl, make a hole in it, pour some water knead the dough. Then this dough was placed under a wooden tamper, where two people knead it to a smooth dough: one person raises and lowers the tamping handle and presses it onto the dough; the second person turns the dough ball, which is under the tamper on the boards.

This is done until the dough is soft, elastic, homogeneous. Then the dough was cut into small pieces and thin sheets of raw matzah were rolled out of them.

Currently, the residents of Vysoki do not bake matzah on their own, but buy it with the help of the Jewish community of Voronezh. However, though the matzah is no longer homemade, some people still keep the cooking accessories for preparing matzah.

These boards were used for tamping and rolling out the sheets of matzah.

Anna Lazarevna Bocharnikova, who recently made aliyah to Israel, also shares some of her childhood reminiscences regarding getting ready for Pesach and baking matzah:

“The women started to cook the dough, and then the men hit it with a crowbar, kneaded it. First, the dough was kneaded by women. Water was brought in the evening, it was called “night water”, it was collected either from a nature reservoir or from a well.

“People gathered together in a house. They brought all the children. We, children, rolled out the dough. One woman was standing by the stove. The stove was hot in the morning and until midnight, there were even fires. The wall of the house caught fire, and the house itself was, as we call it, “on chicken legs”, flimsy, but we succeeded to save it, flooded the fire with water.

“So, there were a woman at the stove, a woman kneading, we are rolling out the dough, 10-12 people, large tables… And before we roll out the dough, after the woman kneaded it, the men used a specially made iron scrap, and this big piece of dough was put under the pressure and kneaded with force to become flexible.

“When the dough is ready, the woman cuts it on special pieces – this is matzah. So she cut a lot of pieces on the table, we, children, took it one by one and rolled it out by ourselves. One guy or a woman were responsible to make holes in these pieces, like in modern matzah. To do it properly, the gears were taken out of the wall clock.

“One woman wass standing by the stove, the stove was heating up. Everything from the stove was scraped out, the furnace was heated to such a state that it was impossible to stand there. The woman washed the whole stove with a damp towel, took out all the ash.

“And then she put matzah pieces directly on the board, one by one, 30 pieces of matzah were cooked at once, for 5-7 minutes, and the matzah was ready, crunchy and delicious.”

“We had to do it quickly, we had only 18 minutes. Only in this case matzah will be kosher. In Hebrew it is called matzah shmurah. It was very important to keep the flour in a propare way. The grain itself was milled and s stored very selectively, so that it was dry and isolated from any damage. Even the millstones for grinding were made specifically for Passover. “

These are rolling pins and pestrilki (picks to make holes in the sheets of matzah).