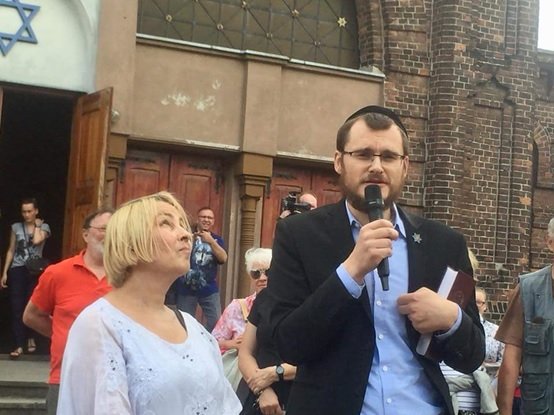 Posted at h in Hidden Jews of Poland: Featured Articles by
0 Likes
Share

Shosh Chovav, Shavei Israel volunteer who recently traveled to Poland to teach Hebrew, is back to Israel and shared with us her experience and reminiscences of visiting Lodz, learning its history and working with the local Jewish community. We’re happy to share her article based on historical facts and her own travel notes.

In accordance with the records of the Qway bishopric, there were Jewish population in Lodz at the beginning of the 18th century. Additional proof was found in the poll tax records that the Jews paid to the nearby towns and villages. It also transpired that between 1784 and 1775 there lived several families of tenants and innkeepers.

In 1793 there were 11 Jews in Lodz (without the surrounding villages), who belonged to three families: a tenant, a tannery owner and a tailor. According to the National Population Registry from 1808, the Jewish population grew steadily, reaching 13.4% of the city’s population. At the end of the 19th century in more than 40 years, the number of inhabitants increased by a thousand! Since then, Lodz has been etched in the memory of the Poles for many years as a huge center of the textile industry and exploitation capitalism, where only money and success are considered.

There is an interesting fact in hystorical sources that the Church mentions the Prussian conqueror who influenced the economic system, as well as the increase in the number of Jews in Lodz and the surrounding villages in 1806-1793. The intervention of the Prussian conqueror led to a distribution of their professional structure both during the era of Warsaw Principality and in the early years of Polish Kingdom.

Flowering of Jewish culture in Lodz 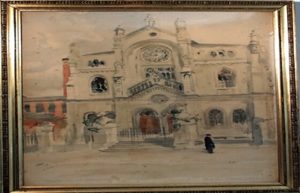 Newspapers and books in Yiddish and Polish were published in Lodz. There were theater and art exhibitions, poetry evenings and concerts. The well-known pianist Arthur Rubinstein, the poet Yulian Tuvim, and miniature cartoonist and caricaturist Arthur Szyk were born in Lodz. In Lodz a group of artists “Jung Yiddish” existed, and a famous painter Yankel Adler was among its founders. Also, “Ararat” Theater, founded by author Moshe Broderson, operated in the city.

Political and religious development and assimilation 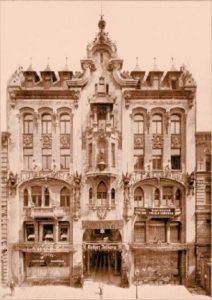 In Lodz there were several political parties, ten before the Second War, among them the Socialist Bund or the Orthodox Agudath Israel. Spiritual life flourished and all the Jewish religious groups were nurtured in Lodz. For example, there were 80 synagogues here, as well as many chassidim of the tzaddik of Alexander. At the same time, the level of assimilation increased in Polish culture. In many houses the spoken language was Polish only and the children studied in Polish schools. The prayers were conducted in Polish. The Jews celebrated the Polish national holidays that emphasized their belonging to Poland.

Traces of the present
Despite the World War II, there are still traces of the presence of the glory of the Jewish community in Lodz. Hospitals, schools, palaces, factories, banks and villas built, or financed by Jews who still live today and still serve the inhabitants of Lodz. For example, the palace on Pomorska Street was built in 1875 for the commercial bank in Lodz. In 1934 it was acquired by the Jewish community and became its main office. After the war the building was used by the University of Lodz and at the end of the 1990s it was restored. Today, it provides several Jewish organizations with offices and area for meetings, concerts and discussions. In the building there is the synagogue where prayers, lectures on the history of Polish Jewry and Hebrew lessons are hold.

The Last Synagogue
The only surviving synagogue after the war was located in the second courtyard at 28 Revolution Street. This small building was built in 1895 on the grounds of Wolf Reicher’s estate. The synagogue survived thanks to the German origin of its owner, Martin Klein. During the occupation, it served as a storage facility and was renovated in 1988. Today, concerts and religious events are held there. It is opened for visitors in coordination with the Jewish community. 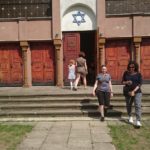 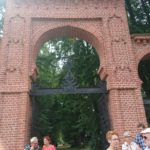 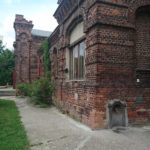 Rabbi Meisel who served as previous rabbi of Lodz passed away about a hundred years ago and since then the Jews of Lodz never had a rabbi. Three years ago, a young new rabbi was appointed. He became a community leader, working day and night and bringing fresh spirit and spiritual strength to the community. Rabbi builds connections with Jewish communities throughout Poland, maintains a stable and friendly relationship with Polish institutions and organizations. He also delivers shiurim on various subjects such as Laws of Marriage: Questions and Answers, Midrashim and Speaches of the Sages, Taste of the Mitzvot, teachings of Rabbi Hasdai Crescas, Rabbi Yosef Albo, Rabbi Shimshon Raphael Hirsch, as well as Talmud, Halachah and Jewish customs and traditions. 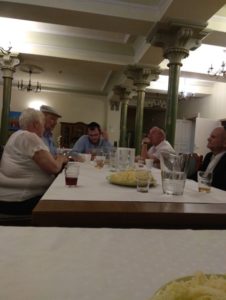 At the picture: Seudah HaMafseket on Tisha B’Av eve 2018 – Divrei Torah by Rabbi David Szychowski. Next to him, Mr. Joseph Weininger, the community president, responsible for financial issues, hotel building, renovation of the cemetery, fundraising and external relations with Jewish communities around the world. Thomas Ruslonsky is a vice-president of the community and is engaged in property, real estate and community management as well as logistics.

The Jewish cemetery in Lodz
The largest Jewish cemetery in Europe was founded in 1892 is located on a hill in the southern part of the Baluty district. The complex also contains a mikvah, a synagogue and offices. Recently, the community president Mr. Joseph Weininger, has been raising funds around the world to rehabilitate it.

This Jewish grave is the largest in the world. It can not be ignored. Israel Poznansky died in 1900 and left behind a huge factory in Lodz, magnificent palaces, a Dr. Sterling hospital and a number of beautiful villas, and he once saw the tomb of a medieval knight and a desired for a larger one for himself. It is worth looking at the artistic structure of other tombstones.

Sheibler’s temple
Sheibler’s temple is an exceptional example of a historical structure located in the Evangelical Cemetery in Lodz. This is a masterpiece in the architectural style of a cemetery that surpasses any structure in Poland and perhaps even in Europe.

A promenade
You can start walking on Piotrkowska Street from any point you choose. It is recommended to ride a rickshaw from which you can view the details of the impressive architecture. A reconstructed tram, also accessible to tourists, travels from Wolnoschi Square to Pilsudskiego Avenue. However, we recommend taking a walking tour that will allow you to take a look at the courtyards of the houses, to linger in one of the cafes or in a friendly pub. Piotrkowska Street was always divided into two. The first part was marked by Dzielna Street, Narutovica Street in the present, which separated the neighborhoods of fabric and weaver manufacturers, who were united over time. Today Pilsudskijo Boulevard with its many paths and Mickiewicz are the natural distribution of the street.

We are sharing with you more pictures of memorials of Lodz, among them the one devoted to the victims of Holocaust. 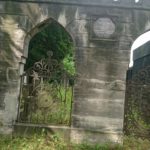 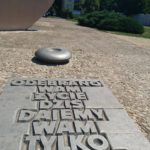 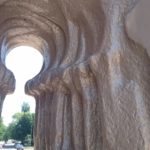 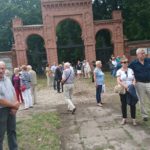 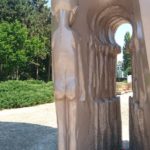