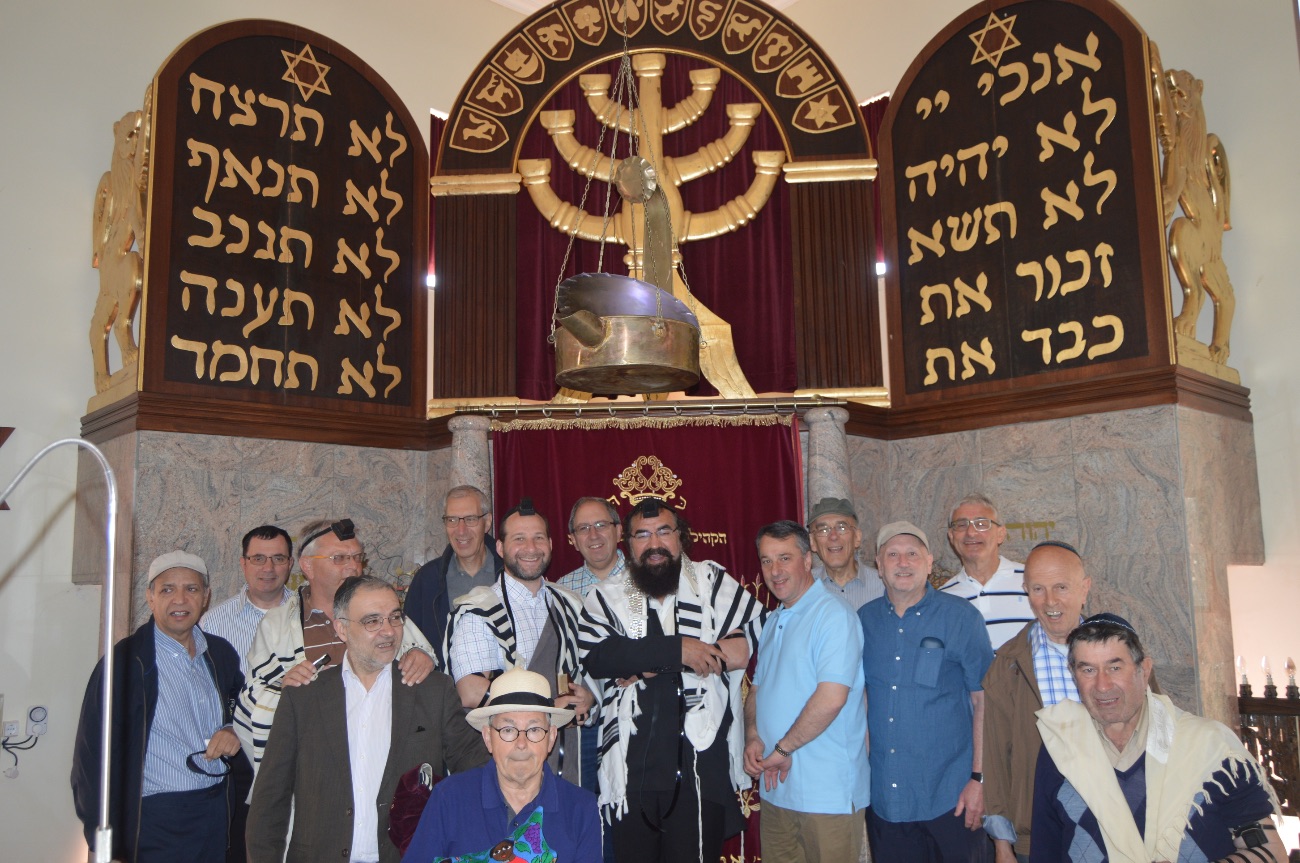 After so many vanished villages, arriving in Belmonte and seeing the Beit Eliyahu synagogue filled us with joy. We went in and were surprised by the number of people there, then they told us that there was a tour of Israelis visiting Belmonte.

While they finished reading Torah, I wanted to memorize the sight of the nine blue Star of David stars framing the ceiling lights over the women’s area. A large lamp decorated by three golden stars of David is located almost over the bimah, increasing in size from the smallest to the other two, highlighted with lights.

On one side of the Aron haKodesh there is a menorah made of wood and on the other side one can see the lions of Yehuda.

After the traditional blessing of the Kohanim two Torah scrolls were returned to the Aron HaKodesh. Suddenly I found myself immersed in Musaf prayer reading the Amida with Jews from other parts of the world sharing the spirit of that particular Shabbos.

During the prayer service, I heard the rabbi speak in Spanish with an accent similar to that of Buenos Aires, Argentina.

We approached to greet him and discovered that his name is Elisha Salas and that he was Chilean.

We started talking and he told us about the Belmonte’s history. As a result of the Inquisition, the hidden practice of Judaism by the crypto-Jews made them forget many Jewish laws. The community didn’t have a synagogue, had no idea of circumcision and even less of the Hebrew language. They kept Pesach, Yom Kippur and Shabbos.

Women played a fundamental role in the preservation of Judaism because they were the guardians and the transmitters of the Jewish tradition. Each house was a synagogue, where values and Jewish culture were transmitted in absolute secrecy as at the time of the Inquisition. Each Shabbos the house was clean, people changed their clothes and gathered together for a Shabbos meal. For Pesach they went to the field before midnight to prepare the bread they ate all the week of the holiday. All this was done in secret through oral transmission, from one generation to another, especially from mothers to daughters.

In Belmonte there were four families who maintained their Judaism and married each other to keep alive the flame of Judaism. Their family names were Diogo, Henriques, Rodrigo and Morao. We met some members of these families in the synagogue. We pass near their houses with the mezuzah at the entrance doors symbolizing their devotion to the Jewish values.

The rabbi told us that when he had arrived to Belmonte there had been 200 Jews thirsty for the knowledge about the Jewish tradition in the town. The rabbi prepared the meat according to the laws of kashrut, provided the community with oil, sweets and other kosher products.

Another rabbi’s function was to bring crypto-Jews back to their roots so he holds a class to introduce them in Judaism and supports communities both in Belmonte and in Alicante.

Of those 200 people, many emigrated to Israel, others died and today some 50 people remain active in the community.

In Belmonte there is the relatively new Jewish museum where the story of Jews and crypto-Jews is told. There is a movie where the descendants of these four families share their stories about the hidden Jewish life in the past and their today’s life as Jews.

The rabbi was kind enough to invite us to listen to the Kiddush in his house. Among the guests there was a family from Porto that spent many Shabbos meals with him. We recited the blessings, while they served us a delicious chollent with salads. We talked about the Jewish values, discussed the parashat Noach and our realitiy as diaspora Jews from other countries. We sang zemirot Shabbos and then said goodbye with a heart full of history, of learning, of understanding that one can meet another Jew and experience with him a common history, feeling it as if it was his own.

We would like to thank Rabbi Salas for his kindness and a beautiful Shabbos we enjoyed to share with him. It helped us to feel once again the meaning of Shabbos.