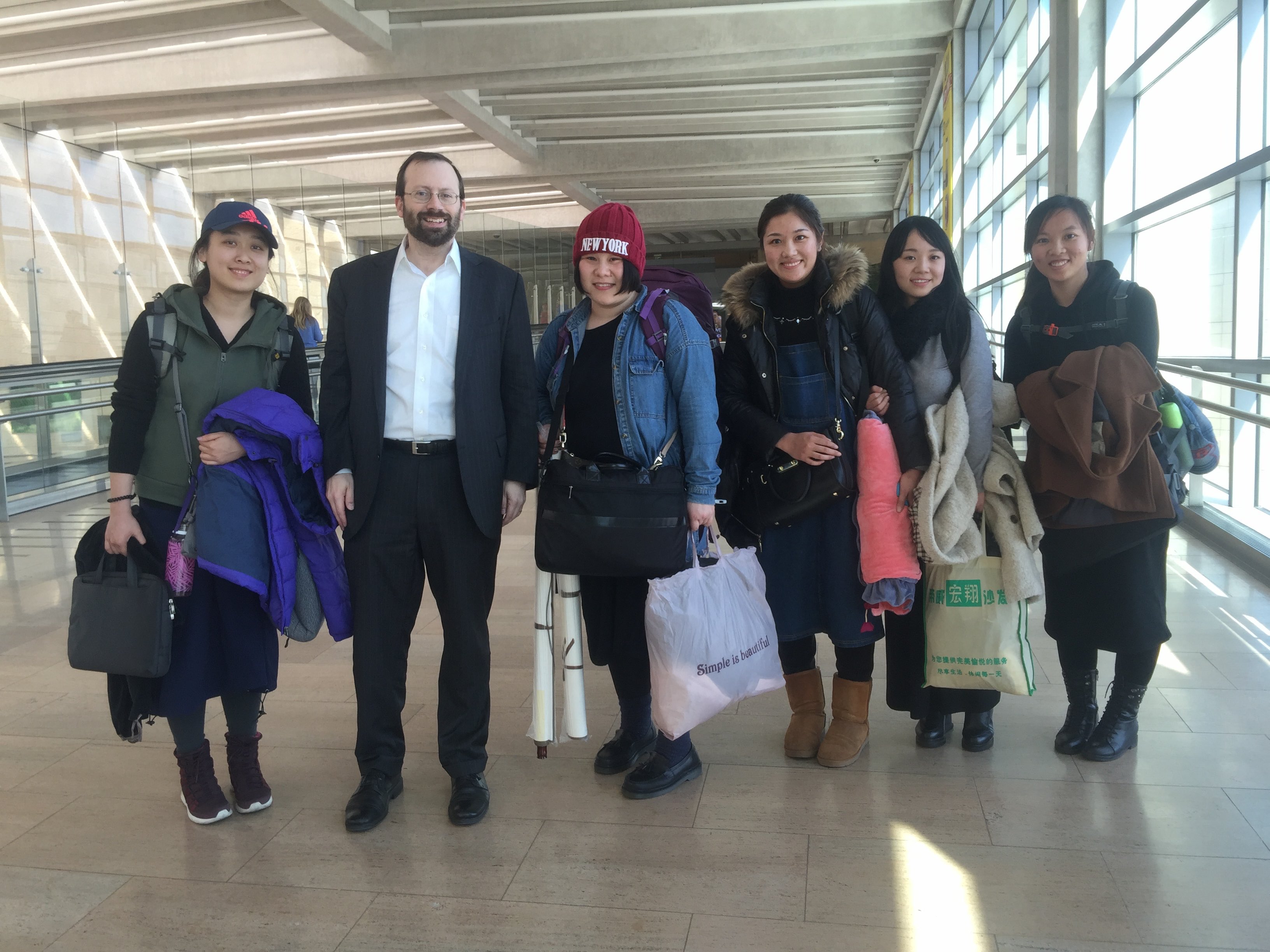 Posted at h in Kaifeng Jews by
0 Likes
Share 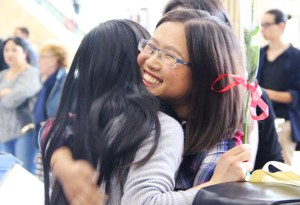 For the past few months, we’ve been sharing with you the stories of five Chinese Jewish women who, with Shavei Israel’s help, received permission to make aliyah. On Monday, February 29, Gao Yichen, Yue Ting, Li Jing, Li Yuan and Li Chengjin finally arrived at Ben-Gurion Airport.

Reporters from numerous media outlets, local and from around the world, were waiting in the arrivals hall to watch history in the making, as the ancient Jewish community of Kaifeng slowly makes its way home to Israel. The Israeli reporters in particular were in for a surprise. When they asked the five women how it felt to be home, the answers they received were in un-halting Hebrew! 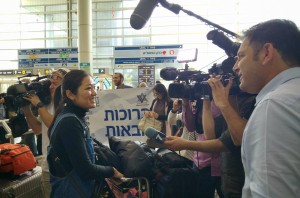 That’s because two of the five new Chinese immigrants are not only coming home, they’re coming back – Li Yuan and Yue Ting lived for four years as teenagers at the Yemin Orde religious boarding school near Haifa from 2006-2010 through a program sponsored by Shavei Israel. But even the other three women responded to questions in a confident Hebrew that they’ve been learning while in Kaifeng with the help of Shavei Israel’s emissaries in China, as well as through online tutorials with Hebrew teachers in Israel.

The five women join seven young Chinese Jewish men whom Shavei Israel helped make aliyah in 2009. A total of 19 members of the Kaifeng Jewish community have come to Israel with Shavei Israel’s assistance.

It’s been a long road getting to this point. “We’ve been struggling for 3-4 years to get the requisite permission to bring these young women here,” Shavei Israel Chairman Michael Freund told Israel National News TV reporter Yoni Kempinski at Ben-Gurion Airport. “I’ve spent a lot of time nudging and cajoling and lobbying bureaucrats, Knesset members and ministers. But thank G-d finally the permission came and they’ve come home.”

Turning to the five women, Freund gave a quick D’var Torah – a word of commentary – before the group set out in minivans for Jerusalem where they will be studying at Midreshet Nishmat – the Jeanie Schottenstein Center for Advanced Torah Study for Women – for the next several years as they prepare for formal conversion to Judaism through Israel’s Chief Rabbinate. Upon completion of the conversion process, they will receive Israeli citizenship. 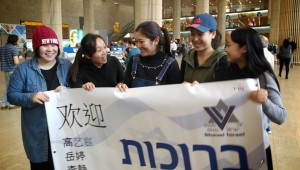 “The Hebrew word for Jew is yehudi,” Freund said. “One of the roots of that word is lehodot, which means to say thank you, to show gratitude. It’s a critical component of being a Jew – to show gratitude to G-d and to your fellow man. So at this special moment, when you have finally arrived here back in the land of your ancestors, the first thing we need to do is to say thank you to the Creator of the world. By coming here, you are about to fulfill the most precious mitzvah [commandment] we have – of settling the land of Israel.”

Freund then led the group in the shechiyanu prayer, traditionally recited upon doing something or, in this case, arriving somewhere for the first time.

Blessed are you, Lord our G-d, King of the Universe, who has granted us life, sustained us and enabled us to reach this occasion.

“We also have to thank the state of Israel,” Freund added. “The fact that we have Jewish sovereignty is a miracle. It’s what allows so many Jews such as yourself to come back from the four corners of the earth.”

The five women then treated the crowd of reporters and curious onlookers to a different kind of treat: a rendition of Hatikva, the Israeli national anthem – in Chinese. You can watch the video here.

Jews have lived in Kaifeng since the 8th or 9th century, the result of Jewish merchants from Iraq or Persia who traveled to China along the ancient Silk Road. The community once had a large and beautiful synagogue, rabbis and its own Torah scrolls. At its height, the Jewish community numbered up to 5,000 people.

But maybe there’s an even deeper connection. The Book of Isaiah (49:12) speaks about the ingathering of the exiles. It concludes by saying “and these from the land of the Sinim.” In modern Hebrew, Sinim means “Chinese.” In that sense, the aliyah from China this week may well be the very fulfillment of Isaiah’s ancient prophecy. 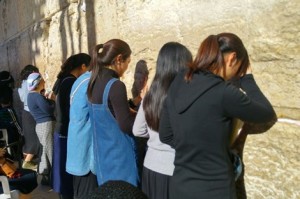 Following the high emotions at the airport, the women, along with Shavei Israel representatives including Michael Freund, drove to the Western Wall (the Kotel). With brand new Hebrew siddurim (prayer books) in hand, each with a personal dedication inside, the women prayed at Judaism’s holiest spot and placed notes between the stones.

Li Jing had been to the Kotel before: on a pervious visit, her note asked that she be able to return and live in Israel. “Now my prayer has been answered,” she said.

Gao Yichen put it more simply. Asked about her emotions arriving in Israel, she said, “It feels like magic.”

You can read the personal stories we’ve compiled on the five women at these links:

Shavei Israel has provided support to the community for more than a decade, both for those who wish to immigrate to Israel, and those who will remain in China but want to know more about their Jewish roots. To learn more about Shavei Israel’s activities in China, click here. To make a donation, please visit this page.