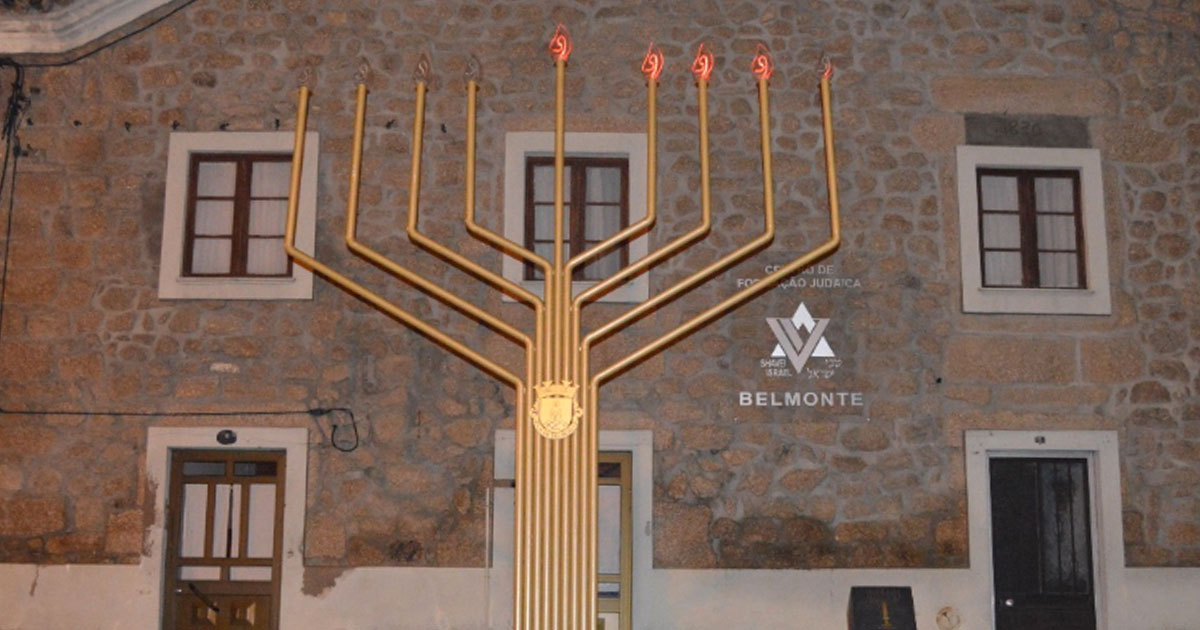 We’re back – with more incredible pictures of Hanukah celebrations around the Shavei Israel world. Last week we took you to India, Poland, Colombia, Chile and China. This week, we return to a few of those locations, plus add some new ones. The holiday may be over, but a picture worth a thousand words is worth sharing. So, here we go…

Let’s start by returning to Belmonte, where the whole town came out to celebrate the festival of lights – not just the Jewish community but all the municipality’s workers including the mayor who you see in one of the pictures below being interviewed in front of the Hanukkiah in the town square. Shavei Israel’s emissary Rabbi Elisha Salas was the “master of ceremonies” for the street party, which took place on the second night of Hanukah. We have a video from the evening – it’s here (in Portuguese).

Belmonte bonus: the Jewish community joined Rabbi Salas to bake some pretty Portuguese sufganiot (Hanukah donuts). Now you can join in the fun too.

Jews and non-Jews alike also turned out for the candle lighting ceremony that took place in Palma de Mallorca on the fifth night of Hanukah. The ceremony was attended by the president of the Jewish Community of Mallorca, Barchilón Abraham and his entire executive committee, as well as prominent members of the community. Shavei Israel’s emissary to Spain Rabbi Nissan Ben Avraham was not able to attend, so community vice president Miquel Segura had the honor to speak first. He drew a parallel between Hanukah and the history of Mallorcan Jews, who he described as “the new Maccabees” for their “stubbornness” to not let the light of Judaism go out and to “rekindle the flames from the ashes of history.” The 4o attendees were then regaled with a culinary that: special Hanukah pumpkin fritters based on a 400 year old recipe!

The Zion Torah Center community in Erode, India came together several times during the eight days of Hanukah. The inspiration was the presence of the Tsur family – our new emissary Yishai Tsur, his wife Tamar and children – who you can see lighting the Hanukkiah, singing and dancing in the pictures below.

For the third year, the Bnei Anousim community in Sicily and southern Italy returned to the infamous Steri Palace – the building that served as the headquarters of the Inquisition in Palermo from 1601-1782 – to light candles in the former dungeons. That’s Shavei Israel’s emissary to the Bnei Anousim of Sicily Rabbi Pinhas Punturello in front of the Hanukkiah.

Last week we shared some pictures and a video from the Bnei Menashe in India; this week, we have photos from some of the Bnei Menashe who have made aliyah with Shavei Israel’s help over the last decade. Celebrations were held in Afula, Kiryat Arba and in Jerusalem itself where a troupe of Bnei Menashe singers entertained guests at the OU Center and later joined in a festive meal. We have videos from the event here.