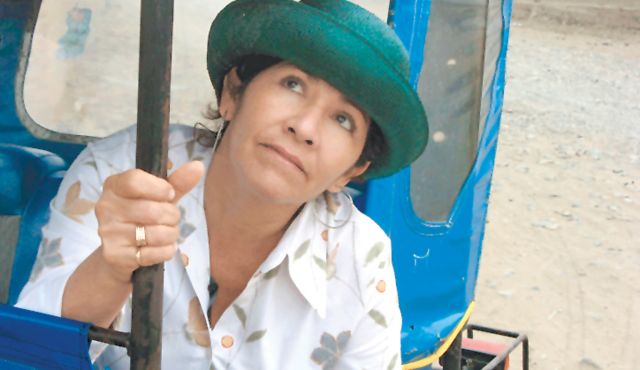 Posted at h in Inca Jews by
0 Likes
Share

A member of the Peruvian B’nai Moshe community (also known as the “Inca Jews”), who arrived in Israel a year and a half ago to care for her ailing father, is sitting in jail awaiting deportation for having overstayed her tourist visa.

Flor Valderama, a 52-year-old mother of five, has appealed the deportation order through her lawyer, Anat Kidron. In an urgent letter to the Interior Ministry, Kidron requested that her client – a practicing Jew though not yet officially converted – be released from jail immediately, arguing that Valderama is eligible for Israeli citizenship under the Law of Return, as both her parents and all her nine brothers and sisters are recognized Jews, as well as Israeli citizens. The letter, sent almost two weeks ago, has yet to be acknowledged, the lawyer said.

In response, Sabin Hadad, spokeswoman of the Interior Ministry, told Haaretz Tuesday that Valderama was ordered to be detained and deported because she had been given only a three-month tourist visa when she entered Israel on February 2, 2011. “After she leaves Israel, she can submit a request, as is common, for a status change if she wishes,” Hadad said. Although the ministry has reason to believe that Valderama is not interested in converting or changing her status in Israel, Hadad added, “The issue will be explored in depth when a request is submitted.”

The Valderamas are among the approximately 500 members of the B’nai Moshe community who over the past 20 years have immigrated to Israel in several groups, most recently in 2006. A community of disillusioned Catholics, these so-called “Inca Jews” came from the town of Trujillo, north of Lima, and began studying and practicing Judaism on their own about 50 years ago.

Beginning in the early 1990s, the Israeli rabbinate started sending delegations to Peru to convert the B’nai Moshe. Although all the other members of the Valderama family were converted, the rabbis did not want to convert Flor because her husband had no interest in becoming Jewish, and the rabbis feared that this would split up the family. In 2006, her parents and siblings moved to the settlement of Beit El, and Flor remained in Peru.

Several years later, she and her husband separated, and in early 2011, Flor flew to Israel after her father was incapacitated by a stroke. Before the Israeli immigration police arrested her a month and a half ago, she had been tending not only to her bedridden father but also to her mother, who had fallen ill, as well as a brother handicapped by polio. She was taken into custody while walking in the street with her sister.

“The situation at home now is very bad, since Flor is not around,” said her 39-year-old brother, Moshe, the polio victim. “I have to go out now and look for someone who can take care of us.”

Flor and two of her sisters were featured in a 2009 documentary film “The Valderama Sisters,” directed by Noam Demsky and Mordi Kershner, that told the story of their quest to convert to Judaism. At the time, Flor and one of her sisters ran a small bed-and-breakfast in Trujillo that catered predominantly to Israeli backpackers.

In her letter to the Interior Ministry, Kidron said that her client’s failure to extend her visa, as required by law, was an honest mistake that could be attributed to her distraction by more urgent family matters. “None of the family members, and especially not Flor, thought for even one moment that she was violating the law and residing in the country illegally and that she might find herself behind lock and key,” wrote Kidron, adding that unlike others targeted by immigration laws, her client had not come to Israel seeking work.

According to Kidron, prison authorities at the Ramle detention center, where Flor is being held, denied a request by her client that she be allowed to celebrate the holiday of Rosh Hashanah.

Among those who have taken up her cause is Dr. Schulamith Halevy, a researcher at the Hebrew University Hispania Judaica research center who advocates on behalf of anusim, descendants of Jews who were forcibly converted and who are now seeking their way back to Judaism. “I have contact with thousands of anusim around the world, and they face all sorts of challenges, but this is the first case I’ve encountered of someone who wants to be Jewish and who practices Judaism being thrown in jail over visa issues,” she said.

The organization responsible for bringing the B’nai Moshe community to Israel is Shavei Israel, an organization that reaches out to so-called “hidden Jews” around the world and tries to strengthen their connection to Israel and the Jewish people. Even though the B’nai Moshe community members had no known Jewish roots, Shavei Israel decided to take up their cause because of their strong commitment to Judaism.

Shavei Israel chairman Michael Freund said yesterday that he became acquainted with the Valderama family during his visits to Peru. “This is a heart-breaking story,” he said. “Flor is sincere in her desire to live as an observant Jew here in Israel, and I hope and pray that a way will be found to enable her to do so.”

This article appeared on Haaretz.