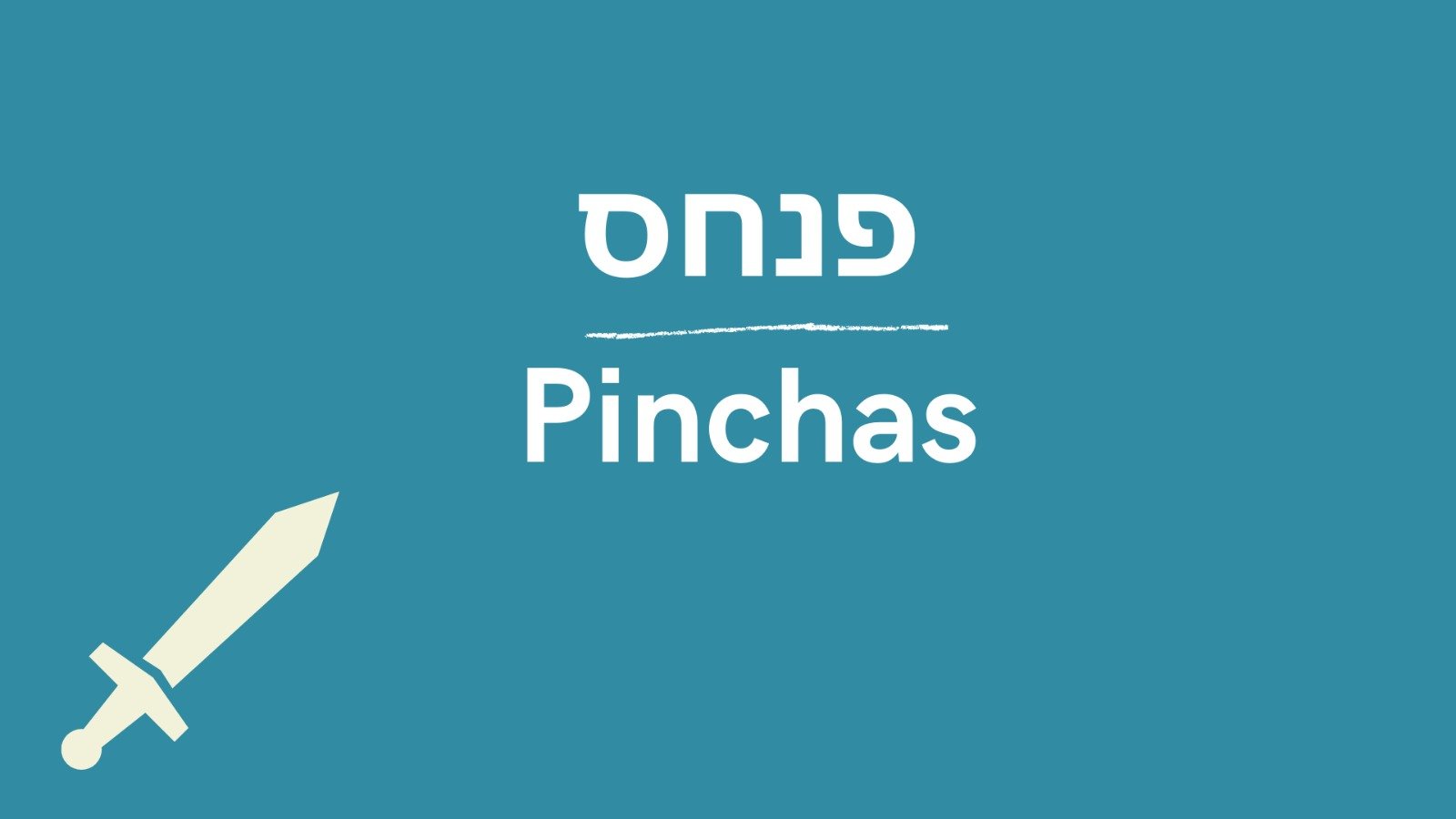 1st aliya (Bamidbar25:10-26:4) Pinchas, son of Elazar, son of Aharon halted the plague. He will merit the covenant of peace, of priesthood. Those killed by him were Zimri, the prince of a family of Shimon and Kozbi, the daughter of a prince of a family of Midian. Harass the Midianites due to this enticement. G-d instructs Moshe and Elazar to take a census of the men over the age of 20.

Our parsha is the parsha of transition. Aharon has died. Elazar has taken his place. Moshe is told he too will die before entry to the land. He will appoint his successor. It is in this context that we encounter Pinchas’ slaying of a mixed couple: a Jewish man and a Midianite woman. And not just any man and woman; dignitaries, leaders of their respective families. Pinchas jumps into the breach and slays them. Does this story ring a bell? Has there been a story in the Torah of a mixed couple, dignitaries, a Jew and a non Jew? And where someone just cannot tolerate this and jumps violently into the breach slaying the people? But in that story it was a Jewish woman Dina and a non Jewish man Shechem. And into the breach jumped Shimon and Levi, slaying the males of the city. Yaakov was not happy, for that was not his way. Here too. Who is Pinchas? The grandson of Aharon. The epitome of peace. Were Aharon alive, he too would have winced. Grimaced. This is not my way. But. Such is life. Sometimes the grandchildren go in their own way. Contrary to the legacy of their grandparents. And that is the crucial importance of this story and this parsha. Transition. New leadership. Sometimes like the old. And sometimes not. But leadership it is.

Though the summary of this aliya is rather terse, it is in fact a lengthy aliya of 47 verses. The purpose of this count is to prepare for the dividing of the land, instructions for which are in the next aliya. But, in addition, it is part of the unfolding transition of power. This story is the repetition of the story of the census done by Moshe and Aharon. The repetition of stories in Tanach is often to indicate that the new generation is doing a fine job of following in the footsteps of the old. Or not doing a fine job. Or doing a different, but equally fine job. Here, what was then is identical to what is being done now. They did it then; we are doing it now. 39 years ago Moshe and Aharon did a census. Today Moshe and Elazar are doing a census. Elazar’s role as the new Cohen leader is taking root.

3rd aliya (26:52-27:5) The Land is to be divided according to this census; those with more, receive more. Though the plots are given by lottery. The tribe of Levi is enumerated, though they will not receive land allocations. None of those of the census of Moshe and Aharon are alive for this census, save Yehoshua and Calev. The 5 daughters of Zelophchad question Moshe and Elazar: though our father left Egypt, he has no male heirs to enter the land. Why should his name be forgotten? Let us claim his portion. Moshe brought their query before G-d.

The claim of these daughters is a legitimate claim. In the narrative of transition of leadership, Elazar is getting his first lesson from Moshe: we don’t know it all. Nothing wrong with a leader, even Moshe, saying “I don’t know”.

4th aliya (27:6-23) Moshe is told that the daughters of Tzelophchad are correct; their father’s portion will be allotted to them. Moshe is told to ascend the mountain and peer at the land of Israel for he will not enter it. Moshe asks for a successor. G-d instructs him to transfer his leadership to Yehoshua in front of all the people. He did so in front of Elazar and all the people.

Moshe, in spite of the personal disappointment that he will not see the goal of his entire leadership, that he will not enter the land, thinks about transition. If the leader is motivated by his legacy, by his accomplishment, then when told he will not achieve his goal, he would kick and scratch to preserve his goals. When the leader is motivated by serving his people, well, then it’s different; they can be served mighty finely by me or by someone else. Moshe cannot allow the news of his end to preoccupy him. His role is to lead the people. And if he will not, he wants to ensure someone else will.

Every day there is an offering done in the Temple, the daily offering of a lamb in the morning and in the afternoon. Very simple. On special occasions there is an additional offering, the Mussaf. The special occasions include Shabbat, Rosh Chodesh and in the upcoming aliyot, all the holidays of the year. This description of the Mussaf offerings is read in shul the most times of any Torah reading over the course of the year. It is read for every Rosh Chodesh and as the Maftir for every Yom Tov – 35 times a year in Israel, 38 in chutz laaretz. I have appended a chart at the end of this article – borrowed with a little adjustment from the Artscroll Chumash at the end of this Parsha. You will note that the Shabbat Mussaf is different than every other one. It is simply a daily double; 2 lambs. No bulls, rams or goats. Makes you wonder if the talmudic statement that we have a double neshama on Shabbat and the halacha that we have 2 challot – is that an aggadic statement, a midrashic flair, or is it merely extending what the Torah itself says? The Mussaf is a double. So too, our soul double. As does our enjoyment, our challa, double.

6th aliya (28:16-29:11) Pesach is on the 14th of the 1st month. On the 15th begins the 7 day holiday of Matza. The first day is a holiday. The Mussaf for each day of Pesach:2 bulls, 1 ram, 7 lambs, with their flour, oil and wine and 1 goat sin offering. The 7th day is a holiday. Shavuot: the new grain offering is brought. Mussaf: same as Pesach. Rosh Hashana: is a holiday, a day of Teruah. Mussaf: the same as the others except only 1 bull, not 2. Yom Kippur: is a holiday, a day of affliction. Mussaf: same as Rosh Hashana.

The daily tamid and the Mussaf offerings are communal; brought on behalf of the entire nation of Israel. There would never be an announcement in the Mikdash that today’s Mussaf is being sponsored by Sarah Cohen in honor of her granddaughter’s bat mitzvah. Can’t do it. The notion of a communal approach to G-d may explain the anomaly of the placement of this section. Didn’t we have a pretty exhaustive description of the sacrifices in Sefer Vayikra? Why is this section about sacrifices out of place, delayed til here? Because it fits into the thematic flow of the end of Bamidbar. Bamidbar is the national march to the Land. But Jewish living and Jewish society is both personal and communal. We pursue G-d personally. We do our mitzvoth. And we will occupy a particular place in the land of Israel; our little plot of land that we just described in the previous aliyot. But, in addition, we are part of this people. As a people we have a unique relationship with G-d; and He with us. Part of the terrible disappointment of the creeping alienation of Jews from Israel that we are witnessing in our time is the complete dissipation of a sense of being a part of a people, a binding to the fate of the people. That is what is symbolized by the communal offerings.

7th aliya (29:12-30:1) Sukkot: the first day is a holiday. Mussaf: 13 bulls, 2 rams, 7 lambs with their flour, oil and wine and 1 goat sin offering. The 2nd day of the holiday has the same Mussaf except only 12 bulls. The 3rd day is 11 bulls. Each of the 7 days has one less bull, with all the other offerings the same. Shemini Atseret: is a holiday. Mussaf: the same as Rosh Hashana and Yom Kippur.

Immediately apparent from this chart is the groupings: Pesach and Shavuot, the uniqueness of the extra offerings of Sukkot, and the pairing of Rosh Hashana and Yom Kippur and oddly enough, Shmini Atseret.