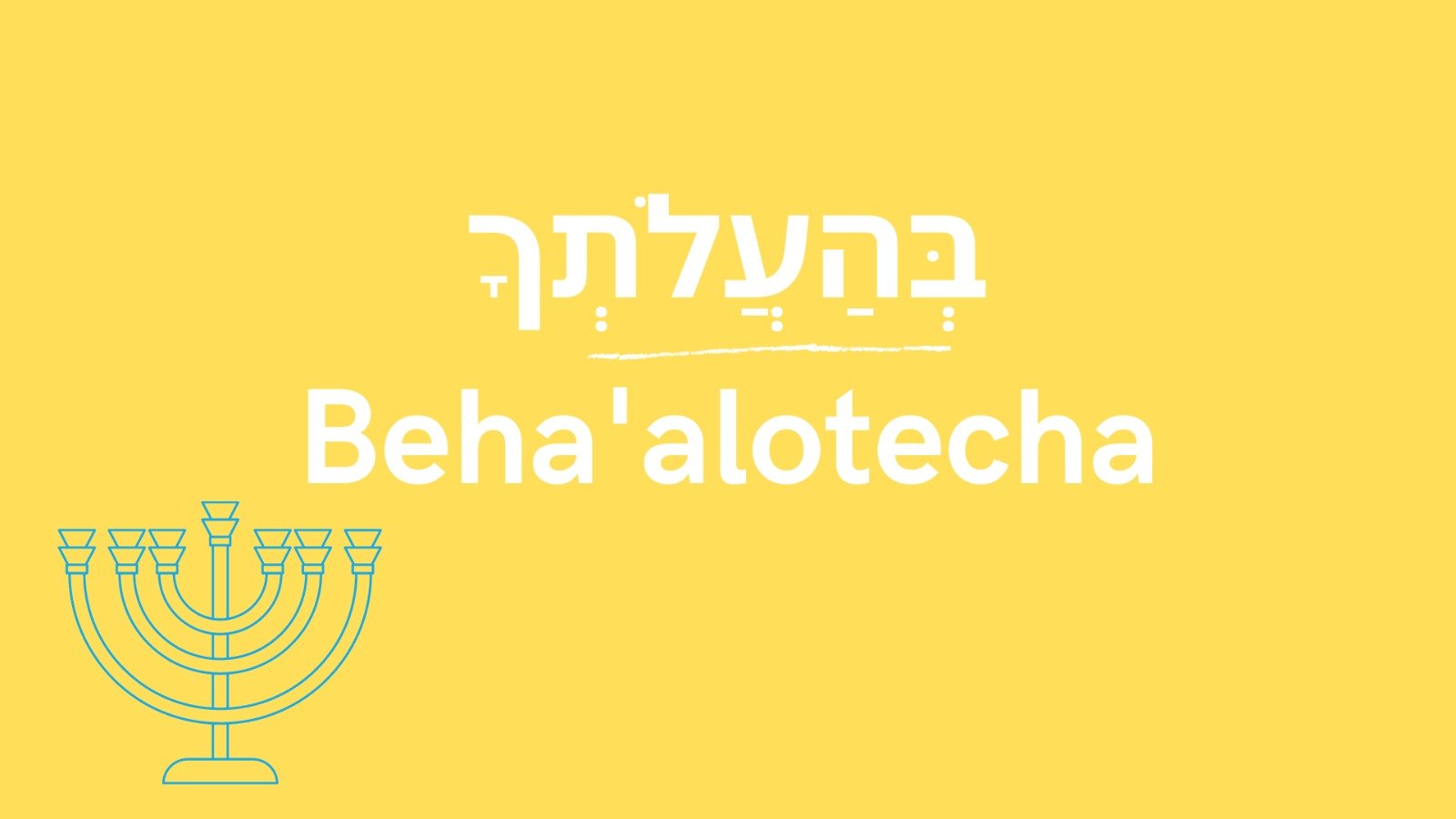 Parshat Behalotcha is one of the richest of the parshiot of the Torah.  In it the preparation to march to the Land is completed; off we go, the march begins.  It is the pivot from the sublime to the practical, from the ideal to the real, from theory to practice.  In other words: people, warts and all come to the fore.  There is complaining, disappointment, pettiness, disputes, frustrations.  It is communal life in Technicolor.  And that is its profundity.  You see, if we were to stop the Torah here, we would imagine Jewish life to be a fairytale:  G-d promised the Land, sweeps us out of slavery, gives us the Torah, wants to dwell in our midst, creates a place of rendezvous of man and G-d, gives us days to meet with Him, and instructs us in choreographed detail how to march in life with Him.  Beautiful.  Then we would look at our lives – feeling parched, distant, chaotic – where is He, where is the order, the choreography, the Mikdash?  We could feel the Torah is a fairytale, of living with G-d in a way we are unfamiliar.  But then there is Behalotcha and the rest of Bamidbar.  As if G-d says: I have shown you the ideal.  And I know full well your complexities.  I expect some of you to be dissatisfied, bored, jealous, resentful.  Skeptical, cautious, weak.  Man is very very complex.  I, G-d says, know that perfectly well: I made you that way.  Your job as a people is to figure out a way to live reaching for the ideal while living all the complexity that man is: all the differences, the divisions, the struggles, the talents, the weaknesses and the aspirations.  Behalotcha assures us that the ideal is to aspire to, while the real is to manage.

1st aliya  (Bamidbar 8:1-14) Aharon is instructed to light the Menorah.  The instructions concerning how the Leviim are to purified and inaugurated through immersion and offerings are given.  In so doing the Leviim are to be separated to be Mine.

These are the last verses of communal, national preparation to march to the Land.  The Leviim are to serve the Cohanim.

Just as for the Cohanim and for the leaders, the ceremony of inauguration impresses on the Leviim that their special status is not mere privilege; it is service of the people, and service of G-d.  A sense of entitlement or of privilege is the poison of communal life; a sense of service, its elixir.

3rd aliya (9:1-14) Moshe instructs the people to do the Pesach in the first month of the second year.  They do so, though some are unable due to their Tuma impurity.  They query Moshe as to why they should be denied bringing the Pesach due to contact with the dead.  Moshe defers to what G-d will tell him.  He is instructed: all who are unable to do the Pesach in its proper time, due to Tuma or being distant from the Mikdash, may do it in the second month.

Even though the book of Bamidbar began on Rosh Chodesh of the 2nd month in the 2nd year, we have here a description of the first Pesach observed after leaving Egypt, which is on the 14th of the 1st month.  Seems to be out of order.  And the description of all the leader’s offerings in Naso occurred on the first days of the 1st month.  But the out of order is deliberate, for it wants to juxtapose the beginning of the March with the uncertainty of Moshe and Pesach.  The theme of our book is the march to the Land of Israel.  The leader’s offerings display their self-perception: we are servants of G-d, not self-serving.  So too the bringing of the Pesach.  We are all, all of us, servants of G-d, not self-serving.  And the inquiry to Moshe from those who are impure is dramatic foreshadowing.  Even though everything has fallen into place perfectly – the camp is set, the Mishkan in the middle, the leaders altruistic, the people dedicated – but get ready.  Because things unexpected are, well, to be expected.  All the planning in the world cannot avoid the expected unexpected of life.  And that is the powerful theme of the rest of this parsha, foreshadowed by the uncertainty of how to accommodate the impure and their Pesach.  Things are going to happen that you just didn’t expect.

4th aliya (9:15-10:10) The cloud descended on the Mishkan by day; by night it appeared as a fire.  When it lifted, the people traveled; where it settled, the people settled.  It could remain in place for a long time or just overnight, or a few days or a month.  The people encamped and traveled by Divine signal.  Moshe was instructed to make 2 silver trumpets.  When both were sounded, the people were to gather; when just 1, the leaders would gather.  A teruah would signal to travel; tekia, to gather.  In wartime, sound a teruah; on holidays and joyful occasions, sound a tekiah.

This aliya poetically describes Jewish travel: guided by the Divine, while called by the trumpets.  It is the Divine-human partnership.  He calls; we call.  So while guided by G-d, it is we who manage the people.  And that foreshadows all that is to come; the messy business of managing people.

5th aliya  (10:11-34) On the 20th of the 2nd month the cloud lifted; the people traveled from the desert of Sinai to the desert of Paran.  The camp traveled just as had been instructed; each tribe in its designated position.  Moshe asked his father-in-law Chovev (Yitro) to travel with them, for his insight would be valuable.  He demurred, returning to his land.  They traveled for 3 days.

The march to the land of Israel begins.  And Moshe is well aware of its challenges.  While he is unique in the workings of the Divine, his father in law Yitro has shown how masterful he is in the workings of the people.  He desperately wants Yitro’s guidance in managing the inevitable, the expected unexpected.  Although Moshe knows the challenges of life that await him, even he is surprised at how quickly the challenges of human foibles arise.

6th aliya (10:35-11:29) Moshe would pray upon travel: G-d, disperse Your enemies.  And upon rest: Return the myriads.  The people complained, angering both G-d and Moshe, a fire burning on the camp’s edge.  They called to Moshe, Moshe prayed and the fire abated.  A group amongst them cried for meat, recalling the fish and produce they ate freely of in Egypt: We are parched with just this Manna.  G-d and Moshe were angry.  Moshe complained: am I to hold them like a baby?  Where am I to find meat to feed them all?  I cannot bear them alone.  G-d responded:  gather 70 elders.  I will give them some of your spirit and they will assist you.  And I will provide meat.  G-d’s spirit flowed to the 70 elders; Eldad and Medad continued to prophecy.

Here begins the rest of the book of Bamidbar: the pivot from the ideal world of Divine guidance to the real world of human complexity.  The first complaint comes fast; and we aren’t even told what they are complaining about.  Because life will never be satisfying to everyone.  The second complaint, the complaint for meat is the dissatisfaction of the Manna.  It is boredom.  Desire for pleasure, for colour and variety.  Though an obvious distortion of reality: is the grass of Egypt really greener, was Egypt truly so pleasant?  G-d will provide the meat.  The elders will provide assistance.  But as for the burden of cuddling the infant that Moshe feels he has been unfairly burdened with?  As my friend Shmuel Goldin points out: that, Moshe, is what leadership is.  Assisting the people as their nurse?  That is the lot of the leader.  You’ll need to learn that on your own.

7th aliya (11:30-12:16) A wind brought quail, covering the earth.  The place was called Kivrot Hataava.  Miriam and Aharon spoke ill of Moshe’s wife; Moshe was the humblest of all people.  G-d spoke to Moshe, Aharon and Miriam, calling to Aharon and Miriam.  I speak to you in dreams: not so to Moshe.  He I speak to face to face.  Miriam became leprous.  Moshe prayed for her healing.

The complaints continue; this time from an unexpected source, Aharon and Miriam.  This challenge is brief but powerful.  The challenges, conflicts, disagreements that arise in life are not to be seen as pettiness and weakness alone.  Even the greatest of the great of our people can have disagreements with our leaders.  That is a crucial perspective on all the challenges to come; human beings will never be free of disagreement or challenge.  It is not just lusting for meat.  It is even the holiest of the holy who legitimately, but here incorrectly, question our most holy of leaders.