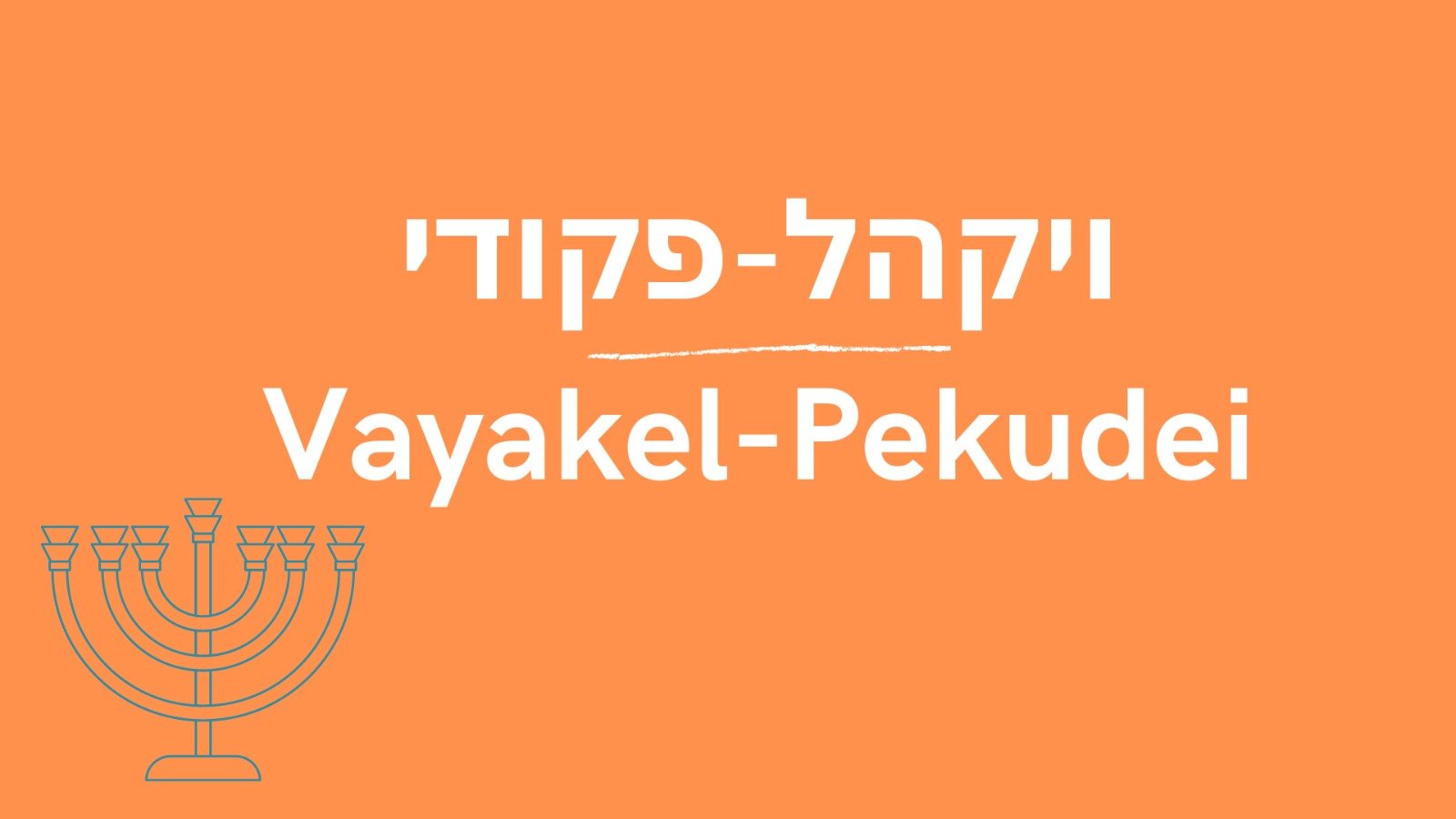 This double parsha is the implementation of the building of the Mishkan. We have had 3 parshiot of commands to build the Mishkan. This is the actual construction and assembly.

When we have a double parsha, the first parsha will have 4 aliyot, with the 4th one continuing into the second parsha. That way each parsha gets 3½ aliyot.

1st aliya (Shmot 35:1-29) Moshe gathers the people, instructing them not to work on Shabbat. He appeals to the people to supply all that will be needed: metals, textiles, oil, spices, jewels. Skilled workers shall make all that G-d has commanded: the Mishkan, it’s covers, the Aron, the Shulchan, the Menorah …. listing all the vessels, the structure of the Mishkan and the Cohen’s garments. In response to Moshe’s appeal, the people bring generously: the metals, the textiles, the jewels, the spices and oil.

The generosity of the people is striking. One would not imagine that we just had the Golden Calf. Man is capable of being an idol worshipper one day; and a generous donor to G-d the next.

2nd aliya (35:30-37:16) Moshe introduces Betzalel, called by G-d, filled with the spirit of G-d, to be the head craftsman. Moshe called Betzalel and Oholiav and all craftsmen to come to do all that G-d has commanded. They took the materials to begin the work. More donations came the next day. Moshe announced that no more donations were needed. The work was done: the curtain drapes over the Mishkan, the goat skin drapes, and the colored skin drape on top. The planks for the walls, the Parochet to hang in front of the Holy of Holies and the Curtain at the entrace to the Mishkan. Bezalel made the Aron and the Shulchan.

Betzalel is described as having Ruach Elokim – G-d’s spirit. He is a master craftsman. But that mastery is G-d given. This is a powerful philosophy of the Torah; that man’s greatness is a gift. We are blessed, endowed with skills. Many and varied are man’s skills: Betzalel has artistry, some have music, some have eloquence, others insight into people, some mathematical ability, other’s wonderful nurturers. We can be proud of our skills; while humbled that He chose us to house those skills.

The building and the main vessels for the service are being made. Upon these vessels, the service will take place. But where is the music?

Let me explain. All the vessels outlined here are used in the daily service. The daily service will involve: lighting the Menorah, having bread on the table that is eaten on Shabbat, the burning of incense, and the offering of sacrifices. The senses are covered. Menorah: sight and heat. Incense, smell. Bread, taste. Sacrifices, tactile. Where is the sound?

Why is there no description of musical instruments? The daily service did have music. The Leviim sang a Shir Shel Yom, a song of the day. When the daily offering was brought and the wine was poured on the altar, there was music; both vocal and instrumental. The Rambam, (Hilchot Klei Hamikdash 3:4) based on the Talmud describes the orchestra in the Mikdash – no less than 2 harps, but not more than 6. Flutes: at least 2, not more than 12. Brass: at least 2, not more than 120. Lyre (kinor): no less than 9, no upper limit. 1 drum. I would imagine that this means that there was like a little chamber orchestra, small, that played on regular days. But Shabbat and certainly Chagim, the big orchestra performed – imagine 120 trumpets. That is a big sound.

Why then, no instructions for the building of the musical instruments?

Perhaps, music is just different. Whereas the Menorah is lit with the same oil every day, the incense recipe is the same, the bread recipe the same, the sacrifices the same – but when it comes to music, same is not what we want. The Avoda is identical daily; because is G-d telling us how to serve Him. Not too ostentatious, not too modest. Measured amounts; come close but not on your terms, on Mine. You will never know Me, so I will tell you how to serve Me.

But music isn’t what He wants; it is what we want. Singing is our reach to Him. It is our voice. It is part of the Avoda – but it is as if He says “serve Me in song, but the song you choose.” Our voice – well, we say in Tehilim – Shir Chadash, sing a new song. Freshness, variety. We will never know what the music sounded like in the Mikdash, but we do know that there were different words daily. Each day had a different Psalm. I would imagine, those different words also had different tunes, different music played by the orchestra to accompany those words.

What music would accompany Wednesday – a psalm of the harsh G-d of judgment? Or Monday, how beautiful is Jerusalem? I would imagine Monday is a major key, with an upbeat rhythm. Wednesday, minor key, reflective, pensive, slow-paced.

While the music was a mitzvah, the singing and instruments part of the service, the Torah left the form, the number, the kind of instruments in our hands, at our discretion. For the music, while essential, is our reach for Him.

4th aliya (38:1-39:1) He made the altar for the offerings, the copper washbasin, the lace curtains to hang around the entire perimeter of the Courtyard, and the screen to cover the entrance. An accounting was made of all the raw materials used: the gold, silver, copper – and what they were used for. The fine textiles were used for the Cohen’s garments, just as G-d commanded Moshe.

The repetition of the phrase “as G-d commanded Moshe” is striking. This is in contrast to the Golden Calf. Here, everyone acts in complete accordance with what was commanded.

7th aliya (40:1-38) G-d commands Moshe: On the first day of the first month, assemble the Mishkan. Moshe is instructed in the exact order to place the vessels and the building. He is to clothe the Cohanim and anoint them. Moshe did all that G-d commanded him. On the first day of the first month of the second year, the Mishkan was assembled, in the exact order Moshe was instructed by G-d. Moshe completed the work. A cloud covered the Ohel Moed; the glory of G-d filled the Mishkan. Moshe could not enter due to the cloud and the glory of G-d. The lifting of the cloud was a signal to travel. The cloud of G-d was on the Mishkan daily, fire at night, visible to all the Jewish people.

The culmination of the building is the descent of the cloud, indicating G-d’s presence. Even after the failure of the Golden Calf, the passionate loyalty expressed in following every detail of this construction is rewarded with His Presence. The Golden Calf followed by the cloud descending on the Mishkan teaches the Jewish people that while we will fail Him, He will not fail us.