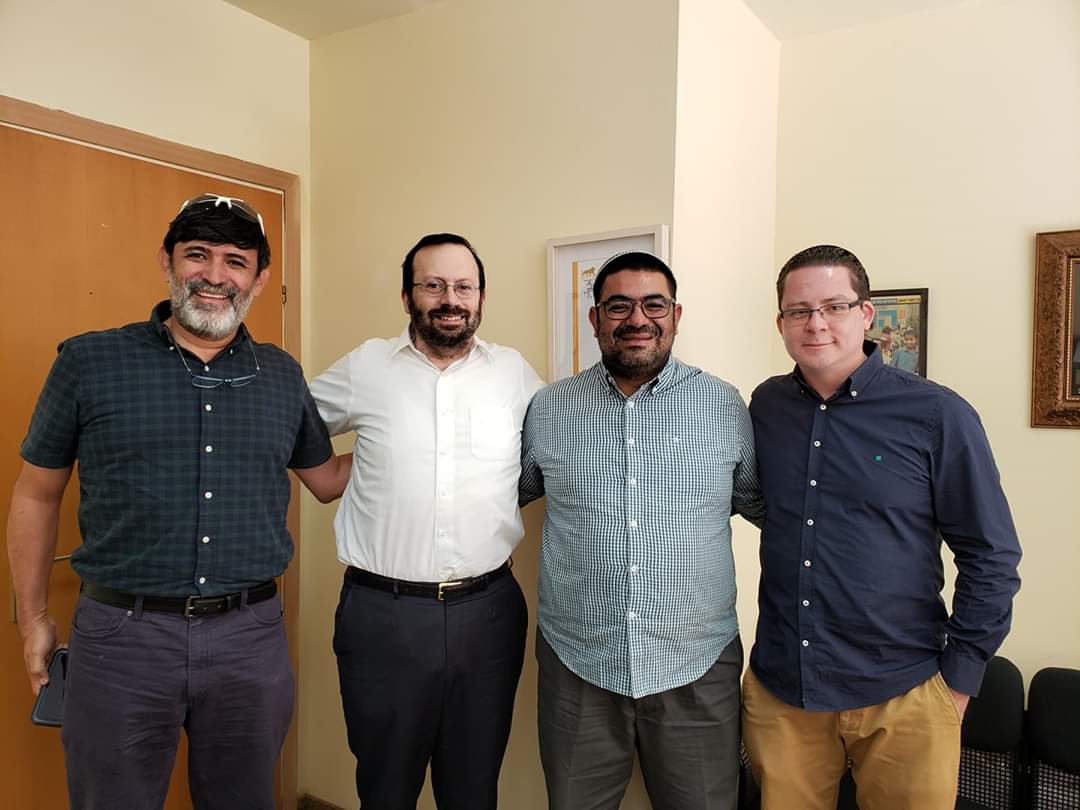 The enthusiasm and commitment of Bnei Anousim of Guatemala to the Jewish way of life impresses everyone who gets acquainted with this small but dynamically developing community. Recently, its leaders and founders took part in a vibrant and unforgettable trip to Israel, visiting many cities and historic places. One of their destinations was the office of the Shavei Israel organization, which for a long time has been providing them with significant support on their chosen path.

Going to Israel for the bar mitzvah of their friend’s son, Fernando Flores, Gerardo Flores and Juan Gutierrez took the opportunity to travel all over Israel.

‘Arriving at the Land promised to our forefather Abraham meant experiencing that warm feeling of return, although it was our first visit to Israel, and our hearts felt that we were coming home,’ Fernando Flores confessed. From Haifa to Safed, from Eilat to Jerusalem, they crisscrossed the country, to get to know its past and present better.

The participants of the trip enthusiastically described the places that they visited, reflecting the diversity of life in the Land of Israel. Among the most vivid impressions are Mount Carmel and the cave of Eliyahu HaNavi.

Their first Shabbat in Israel was held in Haifa.

The tombs of the ancient sages and Jewish mystics in Tiberias and Safed, vineyards on the Golan Heights, a magnificent starry sky view from the Negev, the Masada fortress, the beaches of Eilat and the Dead Sea and, of course, prayer in Jerusalem at the Western Wall all have them a sense of the historic involvement in the millennia-old history of the Jewish people.

In Jerusalem, the group of travelers visited a bar mitzvah organized by their friends who made aliyah from Guatemala. The event was celebrated at the Western Wall.

The community leaders were able to visit the office of Shavei Israel and become personally acquainted with Michael Freund, the Chairman and Founder of the organization, as well as other members of the staff, with whom had previously communicated only in correspondence.

In Jerusalem, they also acquired beautiful decorative elements for the communal Torah scroll and Aron haKodesh made in Guatemala.

‘It was a trip where our souls were reunited with their land,’ Gerardo Flores declared. ‘We made excellent friends, we improved relationships with people we have already known, but above all we strengthened in our hearts the desire to continue this path of return to Judaism’.

The Shaar Hashamaim community of Guatemala, was created as a result of a local initiative, and united people of different ages and backgrounds who were dedicated to keeping Jewish traditions but didn’t belong to the larger Jewish groups or communities represented in the country. Today it consists of some 15 families, offers its members a wide range of classes and activities and is currently building a big community and cultural center that will include a synagogue and a mikveh. You can help them build their center by donating here.