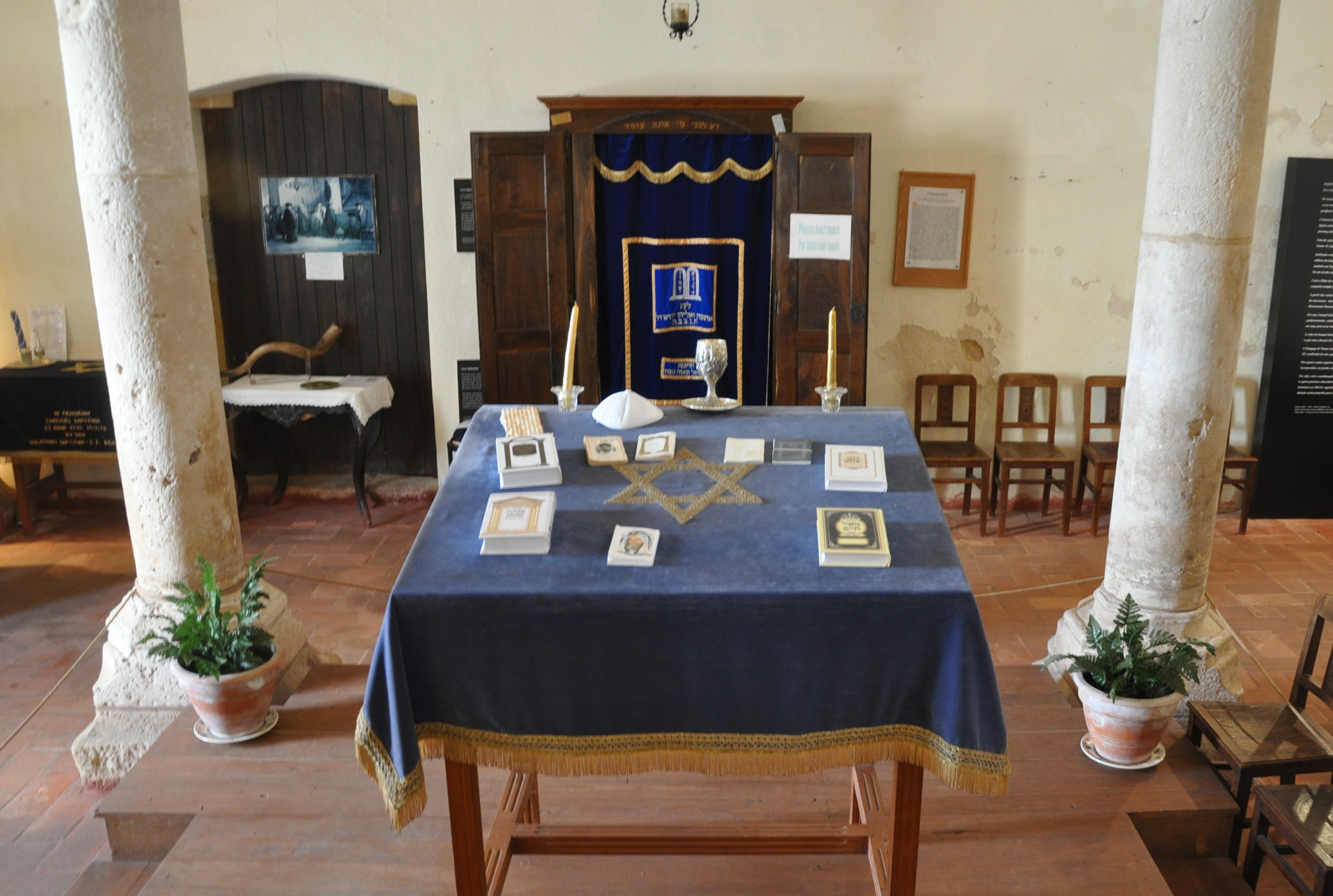 The following is an excerpt from the writings of Nora Goldfinger, who has been touring some of the Jewish quarters in Spain and Portugal with her husband and has agreed to share her experiences with us.

Tomar is a very neat city, with typical Portuguese buildings, houses of no more than three floors, balconies barely protruding from the windows, with many decorated grills and lots of color. It attracts many tourists who are Templars or have a Jewish background.

The City of Tomar is a small city of 15,000 inhabitants. Jacinto street, which passes through the entire Historical Center eventually leads to an area called “Levada.” Levada stretches from the hill of Castelo Templario where it connects with a street named Rua do Pe from Costa Bailo. Near the main part of this street, stretching about 170 meters was the heart of the Jewish community: the current Rua Nova street where the Synagogue is located.

History of the Tomar Jews

In the early years of the 15th century there had been a Jewish community in Tomar. Tomar thrived in the 15th century when the synagogue was built (between 1430 and 1460). The synagogue was active until December 1496 when King D. Manuel ordered (by imposition of Princess Castellana Doña Isabel)all the Jews that by October 1497 they convert or leave Portugal .

Those who did convert were called “New Christians”, but others who in spite of being converted to Christianity continued to practice religion secretly were called “Marranos” or in academic terms Crypto-Jews.

In 1516 the synagogue building was used as a prison, then a church. In 1885, it was a simple adobe house that served as a hayloft, then became a warehouse of goods. Finally, by decree of July 29, 1921 the building was classified as a National Monument.

Two years later, on May 5, 1923, a Polish Jew mining engineer purchased the synagogue, reviving it from its state of abandonment and then donating it to the Jews of Portugal in 1939. Later it became the Luso-Hebraico museum.

We arrived in the city of Tomar with almost no expectation of finding any evidence of Jewish life since they had told us that there was nothing left. However, we visited the city with a little flame of hope. Then we went to the tourist office where they told us where exactly the synagogue was located. Three blocks later we succeeded in finding it with the mikveh right next to it.

When we got to the synagogue Teresa Serra Carvalho welcomed us and introduced us to the history of Tomar’s Jewish quarter. Her family had always lived in Tomar but up until recently had not revealed that they were Jewish. There is another family that had also hidden their Jewish roots and had just recently acknowledged them.

The synagogue, now over 500 years old, remains as a relic of a Jewish commonwealth in Portugal that is long gone. The synagogue retains the original door from the 15th century as well as the central columns and the magnificent acoustical structure of the building, which include large metal plates attached to the walls. The architecture itself is simple and of oriental influence.

As we entered the ancient synagogue, we noticed the Sephardic style bimah in the center. A number of articles had been donated from all over the world to beautify this sacred hall. The blue velvet curtain and golden letters had been donated by the Israeli ambassador in Portugal, The Torah scroll was a gift from California, USA, and the furniture was donated by an English family.There is a replica of a gravestone of the Old Synagogue of Belmonte circa 13th century as well as funeral tombstones from the cemetery of June of Faro, 14th century.

The Tomar synagogue, despite being the oldest in the country remains in good condition. This synagogue signifies the importance of the Jewish community in the 15th century when it was built, and provides us with another source of pride in our history that we may cherish for generations to come.